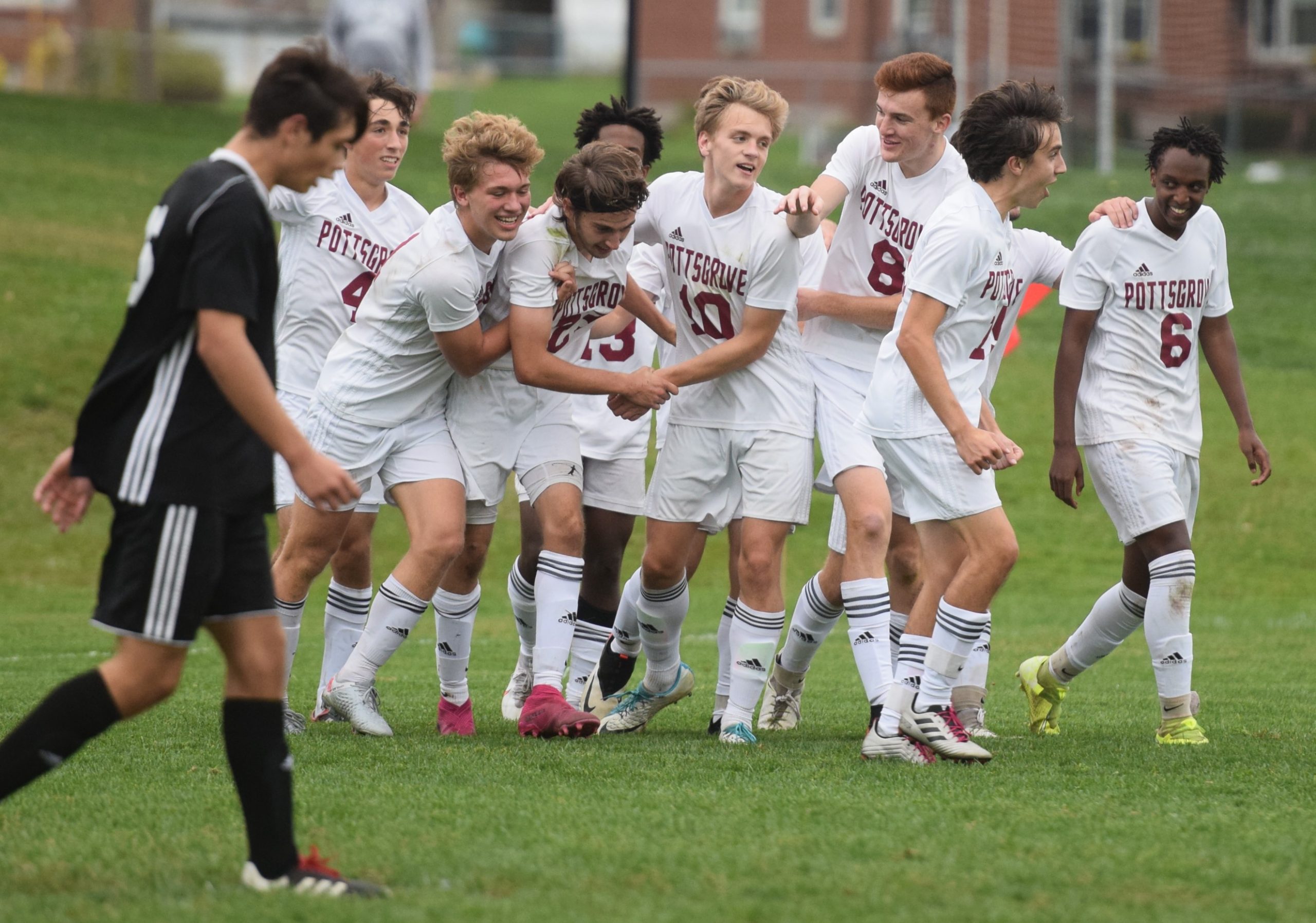 BOYERTOWN >> The Pottsgrove boys soccer team is used to bossing the Frontier Division of the Pioneer Athletic Conference.

There are no divisions this fall in the COVID-19 pandemic-affected season. So the Falcons will just have to keep their winning ways against all comers in the PAC.

That pursuit went a long way Tuesday afternoon when Pottsgrove went into Boyertown and came away with a quality 2-0 win over the defending PAC champions.

Senior goalkeeper Luke Kaiser was outstanding in goal with seven saves, including a momentum-grabbing penalty kick save on Boyertown’s Nick Willson in the first half.

Pottsgrove goalkeeper Luke Kaiser comes out to collect the ball in his area against Boyertown. (Austin Hertzog – MNG)

Freshman Nduati Michuki scored on a rebound of a Shane Gleason header in in the 35th minute to put Grove up at halftime before senior Mike Troutman put the final touches on the statement win by taking the ball off a defender in the Boyertown half and scoring on the breakaway with 35.4 seconds to play.

“It shows that we’re competitors for the top of the PAC,” said Gleason, a senior midfielder. “We’re never out of a game. There’s not much more we can ask of the boys. We showed tremendous heart.”

“We’re coming together as a team and it’s scary when we work together,” said Kaiser. “We’ve proven we can hang with the big schools. There’s not as many small schools in the PAC right now but we want to be at the top with those big schools.”

Pottsgrove became the first team to reach four wins by improving to 4-2-1 in a parity-filled PAC while Boyertown fell to 3-4, a surprising mark for a team with much of the lineup back from last year’s PIAA semifinalist.

Boyertown had its share of great scoring chances – Beckett Wenger hit the crossbar 15 minutes in before the PK save and early in the second half Willson smashed a volley from behind the defense that forced Kaiser into a five-star tip save.

It’s been a recurring theme for the Bears this fall, a stark contrast to the magical run of last year’s PAC title, District 1 final and state semifinals.

“It’s been popping up every game really,” said head coach Matt Danner. “We have some chances early, we have high energy, but when we don’t capitalize on them it’s a deflating experience for us. Are we getting the breaks? Are we getting the bounces? So far this season, they’ve been rare.”

Danner is in his first year leading the Bear boys. He previously was JV coach for the current varsity players before assisting Bill Goddard on last year’s PIAA champion Boyertown girls. Former head coach Mark Chambers departed to take an assistant position at West Chester University, but is helping as an assistant with the WCU season cancelled.

The missed early chances cost the Bears according to Danner.

“Early in the game we had some really good opportunities and we didn’t capitalize on them,” he said. “Their keeper made some nice saves. He obviously had a great save on the penalty kick and a couple others. It felt like the momentum shifter there.”

After weathering the early storm, Pottsgrove grew into the game. It took the lead off Landon Shivak’s delivery to Gleason’s header that was spilled by Boyertown keeper Nick Chlanda and scored by Michuki, who was the only player following the ball.

“I stayed (onside) and got up there for that first ball to make it hard for the keeper to catch,” Gleason said. “It’s a hard header and all you can do is put it on frame and hope the keeper bobbles it. And obviously we have scrappy guys like Nduati making that beautiful run to get that scrappy goal.”

The Falcons got better throughout and, outside of Willson’s volley early in the half, limited the Bears with good attacking play led by Troutman, Shivak and Jeremy Thompson, Gleason in the midfield and defenders Kevin Michuki, Justin Collings, Cooper Fiore and James Thompson.

But the Man of the Match was without question Kaiser.

“Big save on Nick Willson from six yards out (early second half), you can’t go without saying the PK save, getting in his head and knowing which way he was going and getting the save (away) and making sure we’re the first ones to it,” Gleason said of Kaiser. “So many good saves. Having him back there is very helpful.”

Excellent PK save Luke Kaiser on Nick Willson to keep it 0-0, 17 to half pic.twitter.com/G49GbuFXLZ

Kaiser meanwhile was quick to praise Troutman, who sealed the game while bringing the high pressure to steal the ball from a Bear defender and create a breakaway despite being up a goal in the game’s final minute.

“The one kid with the biggest heart on our team is Mike Troutman,” Kaiser said. “He’s gonna fight until that 80th minute, pushing into overtime. He’ll put everything out for us and we’ll do the same for him.”

With back-to-back wins over Owen J. Roberts and Boyertown, Pottsgrove can have visions of a PAC championship, which will be determined by record in an 11-game league season. The structure of the District 1 playoffs has not been solidified, but the Falcons want to make sure they’re there.

“Districts and PACs, we want it all,” said Kaiser of the team’s aspirations. “We want to show we can play with the big schools and be up near the table of the table and especially for districts with not many teams qualifying, we’ve gotta be No. 1 all the way through.”