McCaffery: In a matter of seconds, value of high school football revealed at Sun Valley 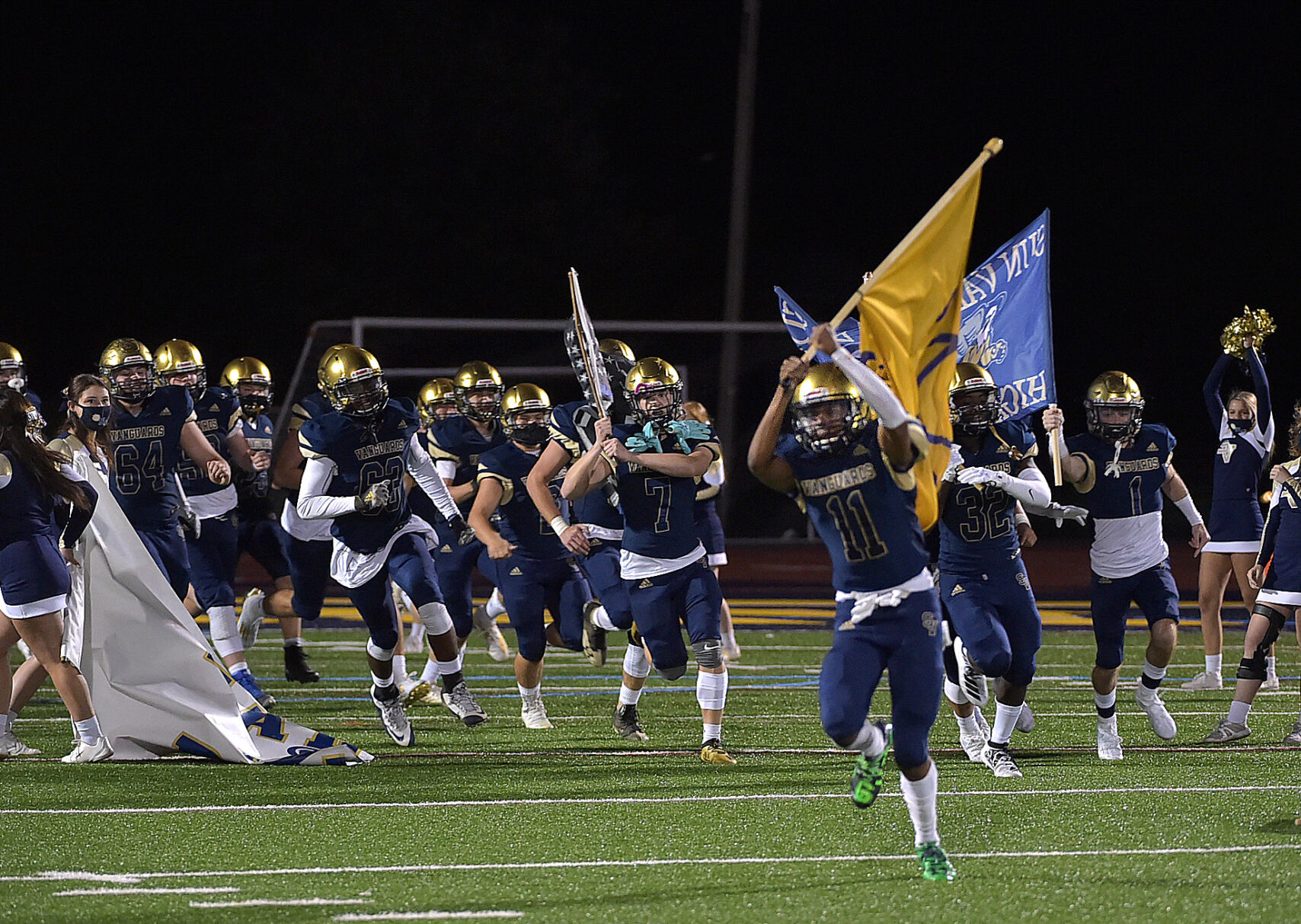 Sun Valley senior Antonio Rivera carries a flag onto the field remembering his teammate Tazuan "Taz" Thomas, who died in a car accident this summer. Rivera would use the inspiration to return the opening kickoff of the opening game of the Delco football season, a 20-6 loss for Sun Valley to Great Valley. (Pete Bannan/MediaNews Group)

ASTON — Sometimes, the value of high school football needs a lifetime to be revealed.

Sometimes, it can take one special season, or game, or achievement.

Friday nigh at Sun Valley, it took 15 seconds.

That’s how long Antonio Rivera took to show why it was time, after too, too long, to resume high school football in Delaware County.

That’s how long it took a Great Valley kickoff to find the Vanguards senior as if by some gravitational pull, for the Sun Valley blockers to line up in perfect position, for the Patriots to seem to fade just far enough away to not interfere, and for Rivera to race 88 yards for a touchdown.

On a night when so much else had the potential to seem surreal, with football finally back in Delaware County after a month-plus virus-concern delay and the stands mostly empty, that one play, that one moment, would show why it was all so important.

There was a reason Rivera scored that touchdown. And he felt it with every adrenaline drip, every cut and every stride down the home-team sideline and into the end zone.

It was July 6, in Philadelphia, when Sun Valley football player Tazuan “Taz” Thomas was killed in an automobile accident. It was later that day when Rivera tweeted, “I just lost my best friend. So talented at football. I can’t even finish my high school career with him.”

For months, there was reasonable doubt that no one at Sun Valley, or in Delaware County, or in many other places, would be able to finish a high school career. But some fears subsided, some safety measures were advanced and football did return.

For the occasion, Rivera wore a special pair of football cleats, designed by a friend, in day-glo green and black. On one, was his own uniform number, 11. On the other was Thomas’ Sun Valley number, 6. And even if it was just coincidence, a simple display of Rivera’s speed and talents, the moment delivered a message: It’s all worth trying.

Rivera ran for six points and prevented some big plays with his sticky cornerback efforts, yet Sun Valley fell, 20-6. For that, the Vanguards were rightfully dismayed. Even the losses can be learning tools. It’s why Pat Rafferty, the Sun Valley athletic director, was so pleased Friday just to unlock the gates, even if the circumstances would be odd.

“And we are very proud of them.”

There were no ticket sales, but each player was entitled to two family tickets. The stands were clearly marked in a way to ensure healthy distancing. There were cheerleaders on both sidelines. The Sun Valley band entertained from the stands. The referees, long suspected of having face coverings, on this night wore them over their mouths.

“Yeah, it was great,” said Sun Valley coach Greg Bernhardt. “It was great to be out here. But we’re all competitors, and we’re out here to win the game. So this was tough.”

To the coaches and players, the score must matter. But high school football exists for more than that. It exists as a teaching tool, to provide better physical fitness, teamwork, and real-life opportunities to enjoy success and accept disappointment.

In some cases, they exist to provide opportunities for scholarships to colleges that families might not otherwise be able to afford.

High school sports exist only for positive reasons. If they didn’t, they would have been banned a century ago.

“This is huge,” Rafferty said. “You look back and ask kids what they remember from high school, and they won’t remember that math class. They will remember that Friday night football game. It’s more than the game, It’s the camaraderie. It’s the teamwork. You get so many life lessons from high school sports. So for our kids to be able to have this now, it’s just great for them.”

So, football has resumed, in a modest fashion, in Delaware County.

“We want you to be safe,” said Jim Mancini, who began his 23rd season as the Sun Valley public address announcer, after reminding the crowd of the safety guidelines. “We want to be back for the next game, too.”

Somewhere in that game, or in the careers of the players who ran onto the field Friday behind Rivera and a flag decorated with the word “Taz,” a good reason to return will have been revealed.