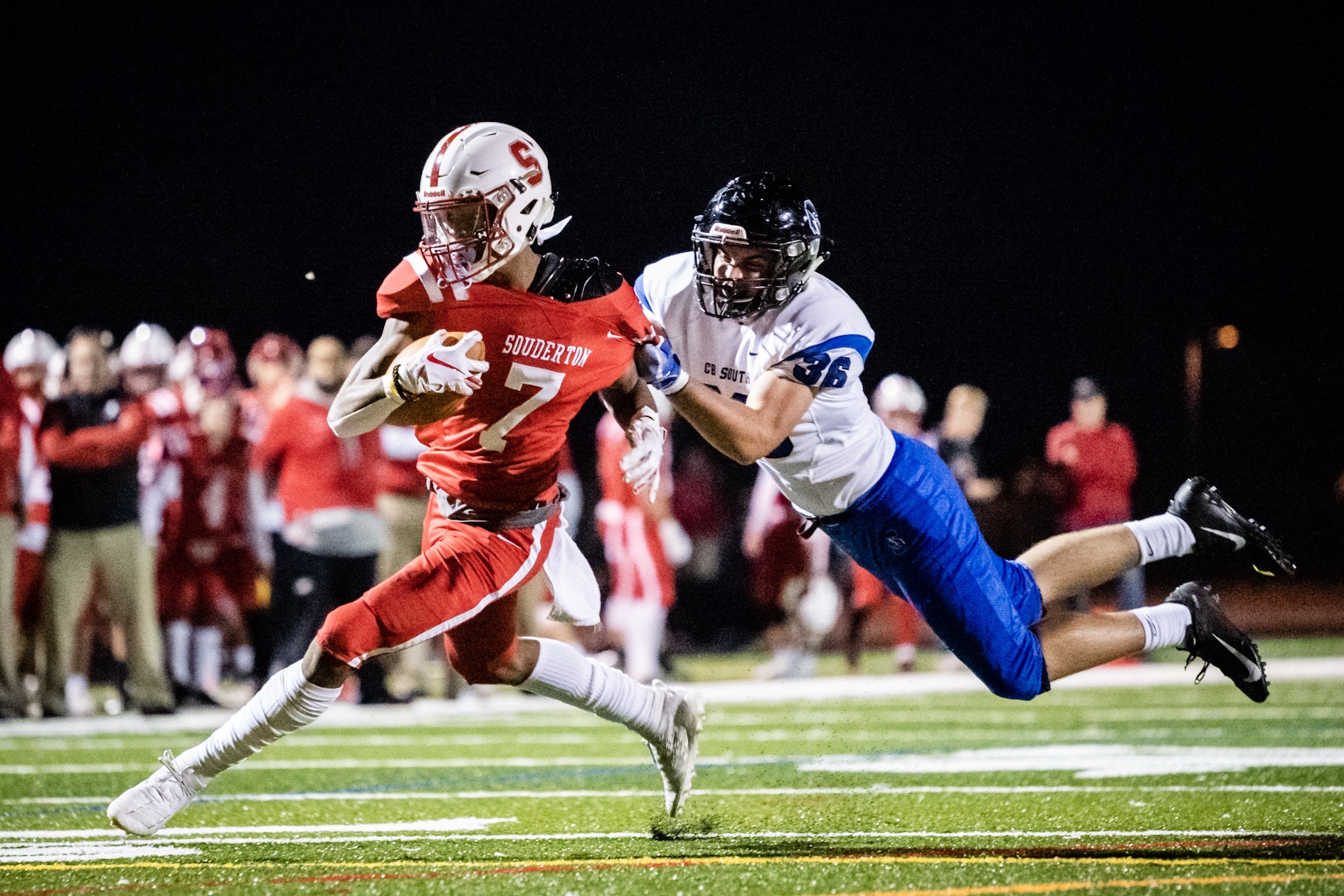 Souderton Area and Council Rock North each had satisfying season-opening victories last week and both will be looking to get to 2-0 when the two squads square off Friday night in a Suburban One League Continental Conference battle at Rock North.

Big Red is coming off a 28-23 victory over rival Quakertown while Rock North is fresh off a 40-6 thrashing of Bensalem.

“We had to get the first one,” Big Red coach Ed Gallagher said after Souderton’s win last week. “It was sloppy but we took care of what we needed to. It’s the first time (this year) we’ll be on a bus and it’s gonna be different (with social distancing) – getting on the bus with masks on, but we have a season. I’m thrilled that we have a season.”

Big Red began the season with a dominant ground attack, which featured the speedy Willie Goods and the power running of Brayden Porter. Jalen White should be back from injury this week and could also be a major factor for Souderton as well.

Big Red was able to turn the tide against the rival Panthers a week ago.

“We came in at halftime and we challenged them,” Gallagher said. “And they came back and played a really good second half.”

“At halftime, the coaches were putting things together and we were coming together as a team,” Porter said. “We picked it up.”

Rock North also got things going on the ground in its opener, with Gavin Papp finding his way to the end zone twice.

It’s only Week Two, but the game could be a pivotal one in the shortened season. Upper Dublin and CR South also come into this week 1-0 in the Continental.

Pennridge at Neshaminy
Day/Time: Friday, 7 p.m., at Neshaminy.
Records: Neshaminy is 1-0 overall and 1-0 in the SOL National. Pennridge is 1-0 overall and 1-0 in the SOL National.
Last Week: The Rams won 35-14 over CB West. The Skins won 35-19 over North Penn.
Players to Watch: Shane Hartzell had three rushing TD’s last week for the Rams. Chris James ran for 146 yards and a score last week for the Skins.
Prediction: Neshaminy 31, Pennridge 14.

Central Bucks West at Abington
Day/Time: Friday, 7 p.m., at Abington.
On Twitter: @ADRobinson3.
Records: CB West is 0-1 overall and 0-1 in the SOL National. Abington is 1-0 overall and 1-0 in the SOL National.
Last Week: CB West fell 35-14 to Pennridge. The Ghosts won 42-28 over CB South.
Players to Watch: Eli Boehm had a 96-yard kickoff return for the Bucks last week. Beau Pearson contributes at linebacker and tight end for the Ghosts.
Prediction: CB West 31, Abington 28.

Plymouth Whitemarsh at Muhlenberg
Day/Time: Friday, 7 p.m., at Muhlenberg.
Records: PW is 0-1 overall and 0-0 in the SOL American. Muhlenberg is 0-3 overall and 0-2 in Berks Inter-County 1.
Last Week: Muhlenberg lost 51-0 to Exeter. PW was shut out 44-0 by Wyomissing.
Players to Watch: Joseph Molinaro is a contributor at wide receiver and cornerback for the Colonials. Rayshaun Crocker is a speedy running back for Muhlenberg.
Prediction: PW 20, Muhlenberg 19.

Upper Perkiomen at Spring-Ford
Day/Time: Friday, 7 p.m.
Records: Upper Perk is 0-2 overall and 0-2 in the PAC. Spring-Ford is 2-0 overall and 2-0 in the PAC.
Last Week: Spring-Ford rolled 49-13 over Boyertown. Upper Perk was shut out 34-0 by Perk Valley.
Players to Watch: Nick Teets had 100-plus yards of total offense last week for the Rams. Malachi Duka did some productive running for Upper Perk a week ago.
Prediction: Spring-Ford 35, Upper Perk 22.

TWO-A-DAYS: Conestoga seniors excited to get one more chance to make waves on the field
DiGIOVANNI: Oxford hopes it’s time to take the next step in Ches-Mont hierarchy