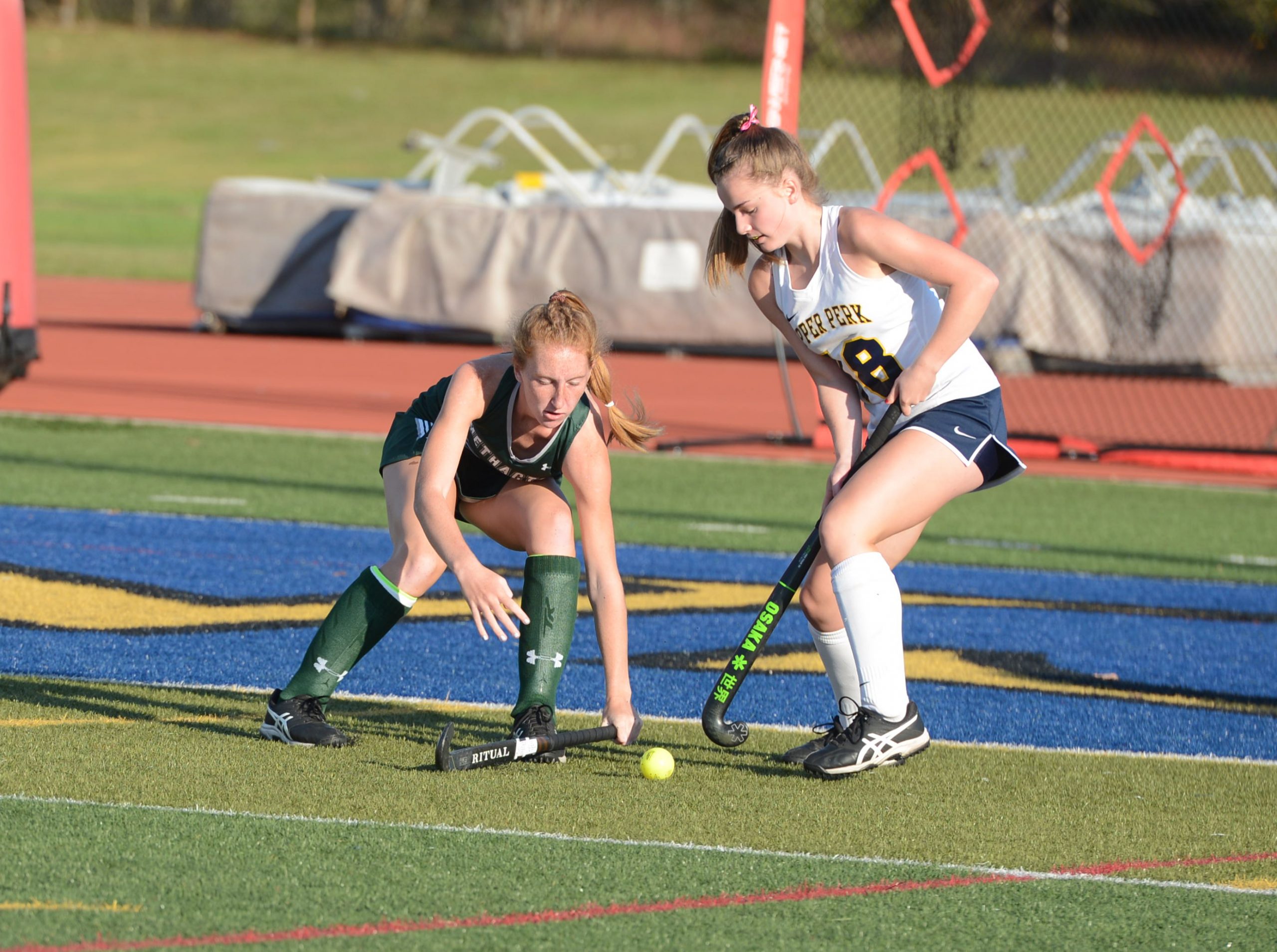 The Warriors came in looking to cap a third straight game against a 2019 PAC playoff team with a win over the reigning league champs. The Indians, the 2019 PAC title winners, were hoping to assert themselves as the league’s top squad once again after cruising past Boyertown and Pottsgrove to start the year.

“I’m very impressed with our team because we played three of the hardest teams in the PAC and we came out winning two and tying one in overtime,” Methacton senior Kristin Riddell said. “It showed that … we have to work hard. We’re going to keep that intensity throughout the season.”

Upper Perk’s Sarah Steinman gathered a rebound and put it into the back of the net at the 7:43 mark in the first quarter, and Methacton’s Jess Serafin answered just 29 seconds later. The game’s last 67 minutes, 43 seconds of the game went without a goal.

Both goalkeepers made sure neither team broke the draw with Upper Perk junior Lynnsi Joyce making 24 stops for UP, while junior Gabby DiPrinzio saved nine shots for Methacton, both making key plays in the overtime period.

“It was really fun to play just because there was a lot of back and forth, but it did get really stressful at the end,” Joyce said.

“It would have been really cool to pull out a win, but a tie’s alright,” she added.

After the departure of just two key cogs, Liz Chipman (Drexel) and Rachel Alderfer (Colgate), Methacton entered 2020 with heightened expectations, following a season when they fell just a notch below the top-tier of the PAC.

Senior Alexa Kratz, an American University recruit, and Riddell are two of the team’s leaders this season, but Warriors’ second-year head coach Amanda Fuertsch said it’s really been a collaborative effort as several others have also found their voices.

When Fuertsch took a look at the Warriors’s schedule she was excited for the tough early-season stretch against Owen J. Roberts, Perkiomen Valey and Upper Perk, noting her group’s potential and drive would be on full display. They started with a 2-1 victory over OJR in their opener before a 3-2 win over PV last week.

While the Warriors couldn’t find the game-winner despite peppering Joyce for the first 10 minutes of OT, they outplayed the reigning PAC champion Indians for most of Monday’s contest, winning the battles in shots on goal (25-10) and corners (14-4).

“With only losing two of the main players last year, we have high expectations and that really came from within the players this year,” Fuertsch said. “It wasn’t just a top down idea. It came from within the players this season. Like, ‘This season’s ours. We got to have a season, it’s going to be our season.’ I think that was the switch that kind of happened this year, the second time being the coach it really came from the team this year.”

Like Methacton, Upper Perk has plenty of experience back from last year’s PAC champion and District 1-2A runner-up squad, including all-area selections Joyce, Luci and Bella Carpenter, Colleen Crenti, Takoda Wells and others like Kylene Gooch, Ashlyn Gatto and Sydney Crossin.

Wells and Bella Carpenter nearly connected for a goal in the game’s final minute before Carpenter drew a foul and corner. Wells, who made plays all over the field Monday, got a good look off the corner play, but the game’s last quality chance for a winner went wide.

UP coach Jamie Warren is hoping one or more of her players will find a way to consistently create opportunities like that in the absence of 2019 Mercury All-Area Player of the Year AiYi Young, who is now at UConn.

“I really think the passing game will be our strength, but we also need to get some gamers, big gamers like we lost in AiYi last year,” Warren said. “But we had it at the end there. I don’t think all together our team was together today. We had some of our key players who didn’t really have their best game today, but that’s going to happen. That’s definitely going to happen, so I think we hung in there, we held on and we came out with the tie.”

With just seven schools (Upper Perk, Methacton, PV, OJ, Pottsgrove, Boyertown and Spring-Ford) approved to start their season two weeks ago the league went with a one-division format in 2020.

Upper Perk’s nine-game schedule is made up mostly of games against those Liberty teams with the exception of two against Frontier rival Pottsgrove.

Playing against mostly larger schools this year is a challenge Warren and her players are excited for.

“It’s pretty cool because they’re always stronger teams,” Joyce said, “so it’s really good practice and work for postseason. … We still want to be No. 1 in the league.”

Methacton still has yet to face Pottsgrove, Boyertown and Spring-Ford, and the Warriors will cap their league slate with rematches against OJR, PV and Upper Perk.

Though they certainly would have preferred to be 3-0 after Monday’s game, the unbeaten Warriors have a lot to like about themselves three games in.

“I think we work exceptionally well as a team,” Riddell said. “We know our weaknesses and strengths and we work really well with each other.”