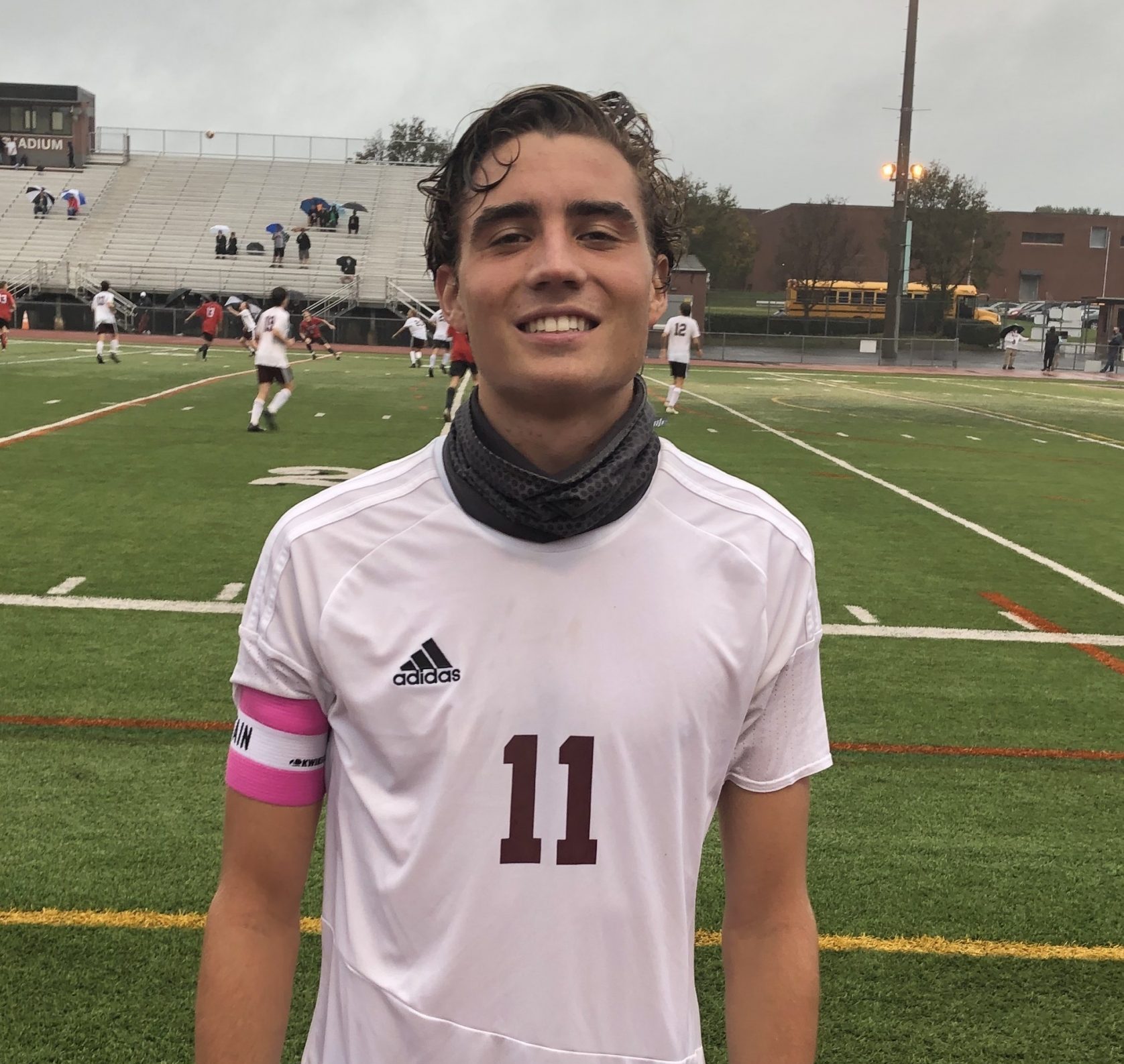 HORSHAM >> It was a heads-up ending for Bryce Lexow.

With the clock ticking toward the final 30 seconds of a second overtime against Hatboro-Horsham and a play he had started giving Abington a corner kick, the senior made his move. Lexow, a co-captain for the Ghosts, told fellow co-captain Gavin O’Neill to serve the ball in quick before the Hatters could get set.

O’Neill did is part and Lexow did his, meeting the ball right in front of goal for a game-winning header as the Ghosts topped the Hatters 3-2 in a rainy double-overtime thriller on Tuesday.

“Our plan was just to win every ball, contest every ball and not be scared to go get into tackles right from the start,” Lexow said. “We wanted them to think twice about going in against us and when we had the ball, play it in up top, let our guys run as much as they can to tire out there defense and just shoot, because the ball was going to skip.”

Tuesday’s tilt, which had the weather of a mid-season Premier League contest somewhere on the western coast of England, was the third consecutive fixture between the sides to go into overtime. Last year, as members of the SOL American, the Hatters and Ghosts tied their first game before Hatboro-Horsham scored late in extra time to top the Ghosts for a conference title.

They’ll meet again in this shortened 2020 campaign, but Tuesday’s result for the Ghosts left them as the only unbeaten in the new SOL Liberty table. The outcome was particularly frustrating for the hosts, who gave up a goal with 1.1 seconds left in double overtime against Wissahickon to lose their opener before Lexow’s tally with 30.9 left on the clock left the Hatters 41 combined seconds away from a little less pain.

“We’re a young group, so it’s a little bit of growing pain maybe but we talked about it, we have to play a full 80 minutes or 100 minutes,” Hatters coach Kyle McGrath said. “The goals we gave up were a little disappointing and we don’t typically give up those type of goals but it was great to see the guys fight back and not give up and get an equalizer with under two minutes left.”

With the conditions alternating from spells of pouring rain to more of a drizzle, both teams had turns of good play and more choppy sequences while every shot on goal created a sliver of opportunity. Sophomore Liam Hartman spotted one such opening early in the first half when he opened up a shot from about 30 yards out.

The ball wove through the rain and found its way home, staking Abington (3-0-0, 3-0-0 division) to an early lead. Hartman’s gambit had paid off, the opening stanza in a good day for the young forward.

“We had to work hard all game and find a way to do what we had to do,” Hartman said. “It’s a dogfight, sloppy conditions but we found a way to get through it and win.”

The Hatters (1-2-0, 1-2-0) replied shortly after. Defender Caleb Hudson, a three year varsity player, boomed a long ball up the field with striker Nick Katherine able to read its flight. Katherine met Ghosts keeper Kevin Kretschman in the air, getting his head to the ball before the keeper’s gloves could with his header skimming in to tie the game.

Katherine, Nathan Scavo and Enrico Romano were all dangerous going forward for the Hatters and they got plenty of support from the midfield in Tommy Harmon, Jacob Kim and Jake Freedman plus fullback Jake Weiss who created some positive idea in attacking scenarios.

“It’s all about the consistency and I think once or two goals go in the back of the net for our forwards, their confidence will go back up,” McGrath said. “We created a lot of chances but maybe didn’t take them the way we should have. We have talented guys, so we have to start putting them in the net.”

Abington closed the first half on the front foot in terms of chances, but the Hatters were able to keep the Ghosts out of the net. Scavo forced Kretschman into a nice save early in the second half on a tight-angled shot and the Ghosts keeper had to repel a blast by Freedman on a second chance following a corner.

Lexow noted the conditions made it difficult to play a more technical game, so the Ghosts wanted to use their size in the middle between him and O’Neill and speed with Hartman, Arsene Bado and Thomas Santangelo across the front. Abington had good intensity in the midfield and it helped set up their second tally.

Luke O’Donnell, who was a good spark off the bench alongside Pat Capone, found space and took a shot that caromed off a defender to the opposite side of the goal. Hartman was right there to cash in, skimming a hard shot along the turf that slipped by the keeper’s grasp and tucked neatly inside the post with a little more than eight minutes to play.

“This is one of our biggest games of the year, so we had to bring it if we wanted to get the dub,” Hartman said. “We wanted to show who we are at Abington. We’re working together, we know each other’s good and bad and using it to get wins.”

The Hatters threw numbers forward, including Hudson, who rewarded the move with two minutes to play. Scavo started the sequence with a shot that was saved by Kretschman, with Katherine forcing an immediate follow-up save before Hudson pounced on a second rebound and buried the tying strike.

“He’s someone we’re going to rely on a lot this year,” McGrath said. “He was an all-league center back last year but we can move him around if we need to. He’s a guy that if we need a goal in a pinch, he’s definitely capable.”

Freshman Oscar Hoffman bailed out the Ghosts in the first overtime, heading a take by Scavo off the goal line to keep the game tied 2-2. In the second extra period, the Hatters had a dangerous free kick but couldn’t capitalize on it.

Just before the winning goal, Lexow helped set up the set piece. The senior won the ball near midfield, carried it into space on his own before spotting and playing a ball to Bado, who managed to hit it off a defender and out for the corner.

“Gav got out there quick and I told him to play the ball while they weren’t organized and they hadn’t set their marks,” Lexow said. “It came right there, I stuck my head out, hit it and it went in the back of the net.

The Ghosts are slated to host the Hatters on Oct. 15 in a night game. It wouldn’t be a shock if that one doesn’t end in regular time either.

“We have a lot of history with Hatboro,” Lexow said. “They took the league championship over us last year, we knew they wanted to beat us and we definitely wanted to beat them and get a little revenge. It’s something about playing Hatboro, we know it’s always a fight against them.”