Bootman ready for another big year in Upper Dublin secondary 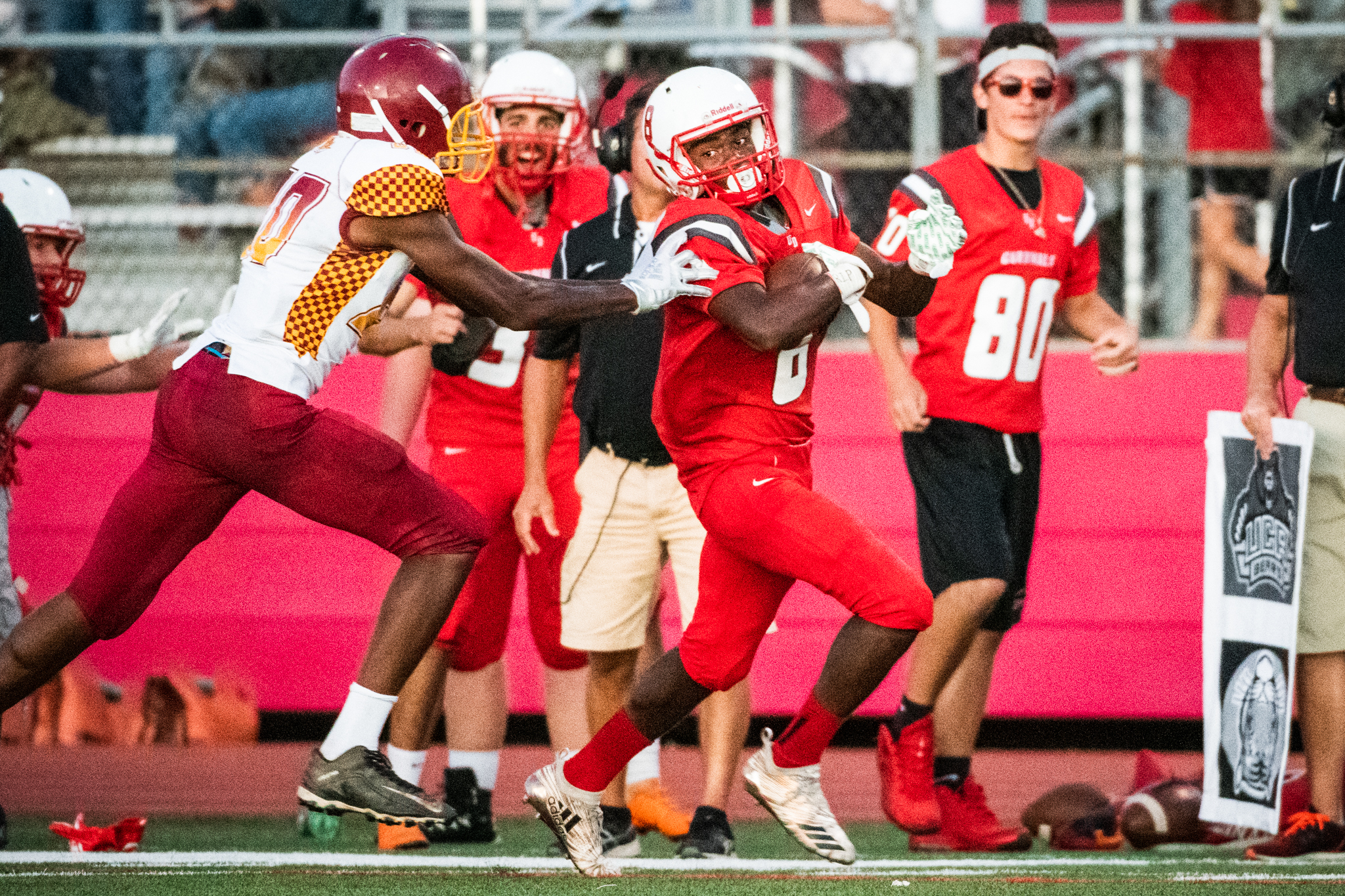 Upper Dublin's Micah Bootman (8) evades a tackle attempt on his way to the end zone during a punt return against Central at Upper Dublin High School on Thursday, Aug. 29, 2019. (James Beaver/For MediaNews Group)

UPPER DUBLIN >> Upper Dublin’s Micah Bootman played a lot more than he expected to as a sophomore in 2018. Injuries in the secondary resulted in a starting role. The cornerback turned the opportunity into a second team All-Suburban One League American Conference selection and helped the Cardinals win the District 1-5A championship.

He followed that up with a first team All-League performance as a junior in 2019.

“Every game was definitely a huge game,” Bootman said, looking back on 2018. “I was a little nervous being the youngest guy out there on the field. I was just trying to not mess up and trying to make plays.

“(The 2018 experience) helped a lot. It made me see the game differently. Making that move from freshman to varsity so quickly – the game came at you.”

This fall, expectations are just as high for the 5-foot-9 Bootman.

“Micah’s a shutdown corner,” Upper Dublin head coach Bret Stover said. “He’s going to be playing on Saturdays for sure at that position or safety. He’s smart. His technique is unbelievable. He’s our quarterback on defense. He’s moving everybody into the right spot. He’s a lockdown corner. He’ll get the other team’s best receiver every week.”

Bootman is the second consecutive shutdown corner the Cardinals are fortunate enough to have after Selvin Haynes graduated in 2019. Bootman got an opportunity as a sophomore when Haynes rolled an ankle. After Haynes returned, the two were a dynamic duo in shutting down opponent’s passing attacks en route to a district title.

“We had two really good lockdown corners,” Stover said. “One was a senior and one was a sophomore.”

“Me and Selvin go way back,” Bootman said. “I’ve known Selvin since I was young. We played since township days and youth leagues. Playing under Selvin on the weaker side, playing under his wing was  good, also with the two good safeties we had with (Mike) Slivka and (Lucas) Roselli.”

In addition to having Haynes show him the ropes on the football field, Bootman had help at home. His brother, Malik Bootman, was a standout running back and middle linebacker for the Cardinals before graduating in 2018 and continuing his career at Albright.

“He prepared me a lot,” Micah said of his older brother. “A lot of work in the summer, a lot of film work during the season, helping me read my keys. He helped me with the big steps to get where I want to be.”

“Micah has that competitive edge that his brother has,” Stover said. “I’m sure the backyard games of football and basketball are very interesting. I was happy we got to coach both of them. They’re both a little different, both unique personalities. Super kids, super family — mom is awesome. It’s a pleasure to have them in the program.”

Bootman is entering his second season as a team captain, which is a rare accomplishment in the Upper Dublin program. Stover, who’s been the head coach since the mid-2000s, could only name a couple of players to be multi-year captains.

“(Bootman) is a captain again this year,” Stover said. “Everyone looks to him when things get rough and he’s not afraid of that. He welcomes that challenge of being the leader and people looking up to him.”

“A leader on the field and off the field,” Bootman said of his responsibilities as a captain. “You can’t just be a leader on the team — it happens in the classrooms. Raising your hand, speaking up. I just try to be a leader everywhere I go.”

UPPER DUBLIN
Offensive Returning Starters: WR Micah Bootman, RB John Kohlbrenner, RB Jake Rossman, OL Tom Smid.
Defensive Returning Starters: CB Micah Bootman, LB Johny Kohlbrenner, LB Jake Rossman.
Offensive Player to Watch: RB John Kohlbrenner. Kohlbrenner does it all for the Cardinals offense – playing running back and slot receiver. He also contributes on defense and special teams. The three-year starter has big-time experience from the 2018 District 1-5A championship team and is one of the leaders for a young team.
Defensive Player to Watch: LB Jake Rossman. Rossman is moving from nose guard to linebacker for the Upper Dublin defense. He’s got the speed to stand up and the football IQ to be a leader in the middle of the defense.
Season Outlook: “We want to win … We’re just happy to be playing under these circumstances because unfortunately there are people who aren’t playing. Our goal is No. 1 we want to stay healthy out here, we want to keep the virus away from our team and then be able to play every Friday night through the month of October. That’s the goal right now. Wins and losses will take care of themselves as far as I’m concerned, but I want these seniors to have an opportunity to have a season because I felt really bad for our spring athletes.”