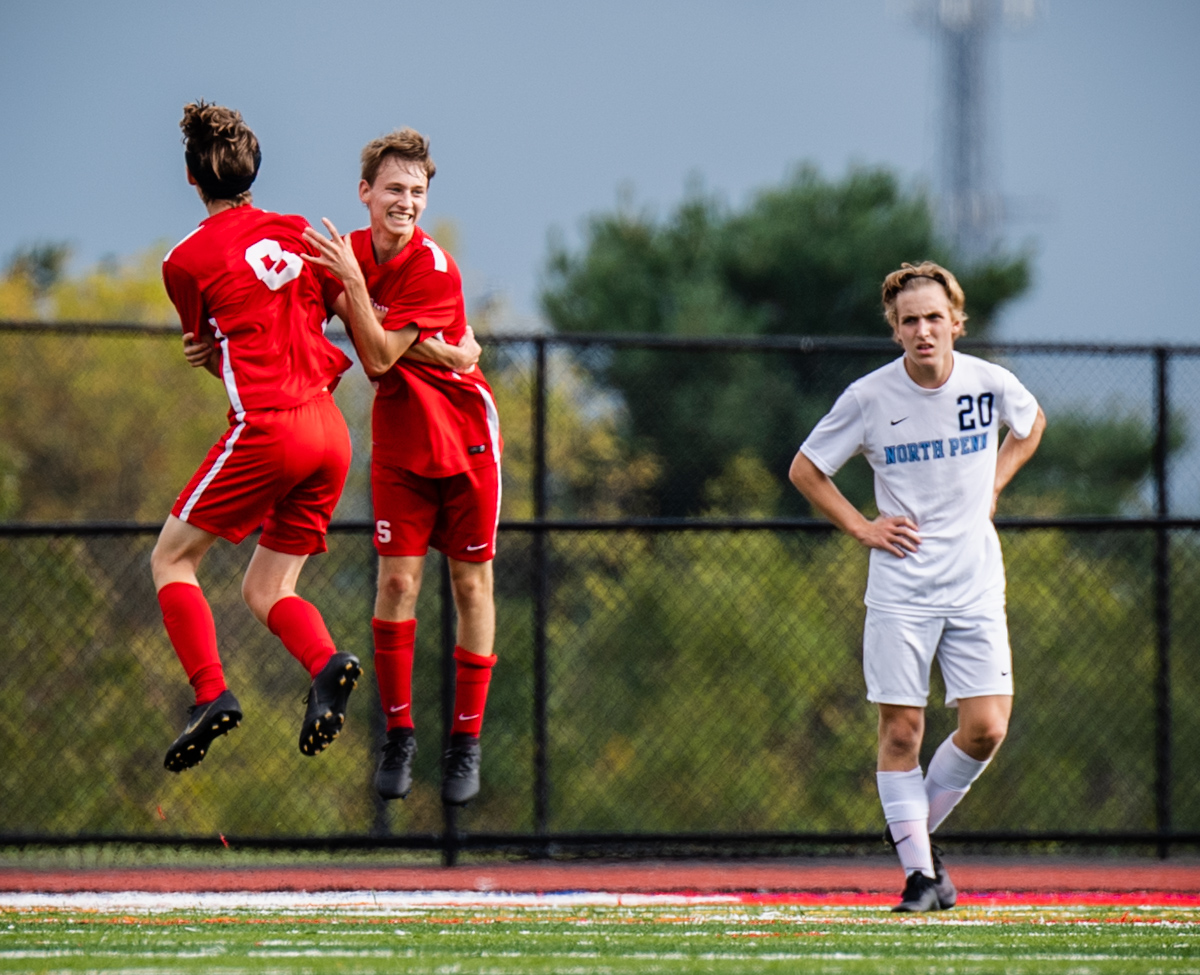 FRANCONIA >> On a rain-soaked afternoon on the turf at Souderton Area High, an epic win streak was stopped.

“He stood on his head. He was fantastic,” Indians coach Matt Benner said of the junior after the team’s Tuesday clash with rival North Penn. “He made save after save and kept us in the game until we could find the back of the net.

“That’s two shutouts for him and we expect more from him moving on.”

Big Red expects lots of big things moving on, thanks in part to a 2-0 victory over the defending 4A state champion Knights in a Suburban One League Colonial Division contest.

Souderton’s Dillon Barbieri (10) comes in to sweep the ball away from North Penn’s Alex Stewart (5) during their game on Tuesday, Sept. 29, 2020 at Souderton Area High School. (James Beaver/For MediaNews Group)

“We have so much respect for North Penn,” Benner said. “Year in and year out, they’re so athletic and well coached, have dangerous attacking players.”

“They’re good in the air,” McClure said, “so we were trying to keep everything on the ground.”

With McClure digging in, Souderton pushed ahead midway through the first half.

With Knights keeper Sawyer Meade coming out a bit, Brandon Fornwall beat him to the ball, lifting it up and over him and into the net for a 1-0 Big Red advantage.

Souderton doubled its lead to 2-0 just before the half, when T.J. Hibsman’s hustle allowed him to outrace a defender to the ball and knock it into the far corner.

“We’ve been talking a lot about getting ourselves in good attacking positions and getting those good final passes,” Benner said. “And we were finally able to get in behind them today and we finished. It’s a great feeling for the boys when they see that ball go in the net. And we took that energy into halftime.”

North Penn (2-1) turned up the pressure after the break, but McClure stood his ground.

“It’s really exciting,” McClure said of this kind of challenge. “You get in the moment and it feels good.”

He was a calming presence during tense times.

Said Benner: “Even 2-0 feels like a stress test. The league we play in is so good. We knew North Penn wasn’t gonna stop. We knew how good they are and how much character they have. And that they were gonna bring everything they have in the second half.

“But we feel real confident in our back line. If we can keep teams off the board, we have a real chance to win the game.”

The Knights threatened on multiple occasions to make it a one-goal contest, but Souderton’s defense did not break down.

“I think our communication was key, and we just wanted this one really badly,” McClure said. “I feel like we can win every game this year, and we’re coming in here to win the (Colonial).”

The win could prove to be a monumental one for the Indians.

“It’s a great confidence builder for the boys. It’s a great momentum builder,” Benner said. “It does say a lot that we’re a much different team than we were in the past. We have lots of players on our roster who played lots of minutes as underclassmen.

“And now we’re really starting to see all of that come together. We have big goals. And I think the boys are really focused. They’re working hard every day in training. They love playing together. So I’m really excited to see what the future brings.”