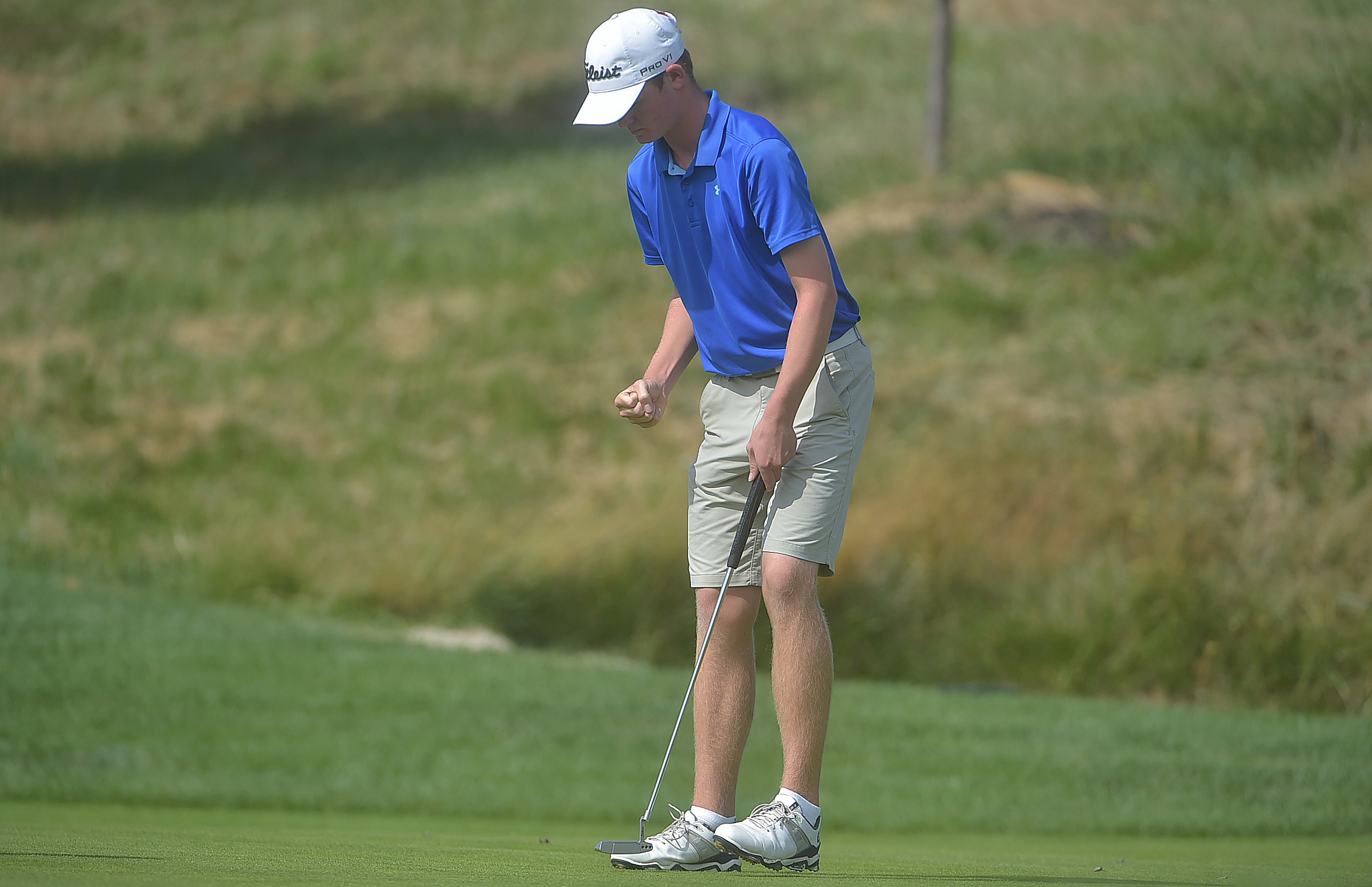 Gross particularly felt right at home Tuesday – Applecross is his home course. One of the top-ranked golfers in the United States for his age group, Gross earned a four-stroke victory, shooting a 4-under par 68 for the boys’ title. Two days earlier, he shot his best-ever round at Applecross, a 5-under 67.

The Downingtown West freshman tallied three birdies, and the highlight of his round was an eagle on the 570-yard 12th hole. Gross pounded a mammoth drive on the dogleg left par 5, then hit a 6-iron to within five feet of the cup.

Downingtown East’s Ava O’Sullivan measures a putt on the tenth green at Applecross Country Club during the ChesMont Championships.

“I hit a lot of good iron shots today,” said the long-hitting Gross. “I wanted to get it as close to the hole as possible.”

Gross will advance to the PIAA District 1 Championships at Turtle Creek Oct. 5-6, but will not be able to compete in PIAA Regionals or States, as he has committed to an AJGA event in Oklahoma in mid-October.

Kochis, the defending boys’ champion, tallied three birdies in his even par round of 72.

“I was driving well today, but putting was hard,” said Kochis.

The Applecross greens had recently been aerated and some of the golfers noted that they were a little bumpier than in prior years, which made for more challenging putting Tuesday.

D’Ariano hit 15 greens en route to his score of 72 Tuesday. Interestingly, both he and Anderson finished tied for third place last year at the Ches-Mont Championships.

On the girls’ side, O’Sullivan finished in first place with a sparkling 1-under par 71. She started her round with three consecutive birdies, and finished with six birdies. She hit more than a dozen greens Tuesday.

“My tee-to-green game was good today,” said O’Sullivan, who finished third at the Ches-Mont Girls Championships last year, and tied for 14th at the 2019 PIAA state championships.

Downingtown West’s Nick Gross leads his foursome, Ryan Dariano of Rustin, Ben Saggers of Shanahan and Win THomas of Unionville towards the ninth green at Applecross Country Club during the ChesMont Championships.

Finishing in second place, just one stroke behind O’Sullivan, was Unionville sophomore Mary Dunigan. As a freshman, Dunigan finished second in this tournament and went on to place fifth at States. She had several birdies Tuesday, and nearly holed her 8-iron on the par 3 sixth hole (133 yards).

“I played OK today, but I’m definitely going to work on my putting,” said Kim. “I had a bunch of birdie putts today that lipped out.”

Unionville’s Kaitlyn Ferrer chips out of the rough on the 10th fairway after an out of bounds drop at Applecross Country Club during the ChesMont Championships.

Henderson’s top five golfers were 27 over par, sixth strokes better than second-place finisher Downingtown West. The Henderson quintet that will be heading to Districts for the team competition is Kochis (72), Suroweic (73), Baker (75), Eric Angle (83) and Drew DiMatteo (84).

For the Unionville boys, who captured their sixth consecutive Ches-Mont team title, the five top golfers were 22 over par, seven strokes better than second-place finisher Kennett (29 over par). The Unionville quintet who will be heading to Districts for the team competition is Anderson (72), Charlton (75), Thomas (76), Donnelly (79) and Starnes (80).

For the Unionville girls, the four top golfers were 42 over par, 14 strokes better than second-place finisher Downingtown East. The Unionville top four scores were Dunigan (72), Scully (75), Santaguida (91) and Evanko (92).