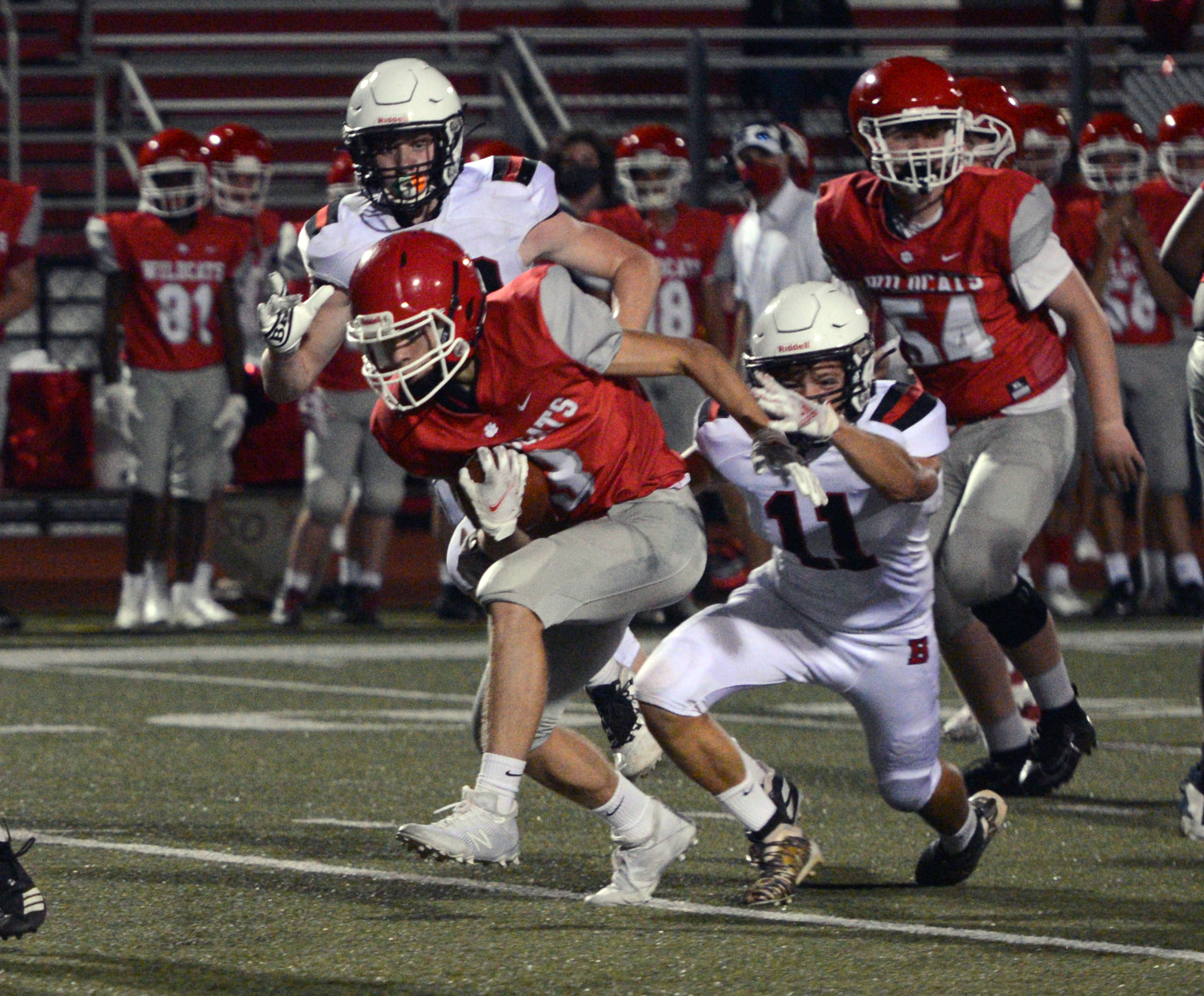 Senior wideout Christian Grossi said the Wildcats’ first offensive play of their season opener Friday night against Boyertown was in the works well before then.

Grossi ripped off a 45-yard touchdown run on his first carry, helping set the tone for the Wildcats’ 37-7 roll over the Bears in their season opener.

.@OjrWildcatFB senior Christian Grossi got the Wildcats out to a strong start with a 45-yard TD on team’s first offensive play. Here he is after 37-7 win over Boyertown: pic.twitter.com/IOIGe12zni

“We’ve been working since January coming up with plays like that just to score right out the gate,” Grossi said. “We knew they probably weren’t going to be ready for it. They didn’t have as much time to prepare and that was our mindset going into the game.”

“It seemed to flatten them out, but in terms of us, we just kept on rolling,” he added. “We’ve been working, and we’re really excited for the rest of the season.”

Big plays like Grossi’s opening score were the theme of the night for the Wildcats’ offense.

Grossi took his second carry for 42 yards on a similar play around the end, setting up Grimm’s first touchdown run and giving the Wildcats a 13-0 lead five and a half minutes into the game.

After Boyertown’s Roman Marinello scored a touchdown run to pull the Bears within one possession, Grimm responded with runs of 21 and 31 yards, the second of which finding the end zone for his second score of the game. Carson Johnson kicked a 23-yard field goal in the closing moments of the first half to stretch the lead to 23-7 at halftime.

A 21-yard completion from OJR sophomore quarterback Michael Reed (who found out he was starting Thursday) to senior Dante DeNardo, set up the Wildcats’ next score — a one-yard Reed sneak on fourth-and-goal.

Sophomore running back Hunter Rhoads finished off the big plays with a 43-yard fourth-quarter touchdown run to finish off the game’s scoring.

“It was awesome, it was great,” Grimm said of Grossi’s opening score setting the tone. “First carry touchdown, I was like, ‘Oh let’s go. We’re ready.’ I think that helped a lot. … It got us all going. Everyone was really hype.”

“I felt pretty good,” Rhoads added on his personal night. “Me and the linemen, we all prepared. Everybody prepared really well, and they just made the holes and I just followed them.”

Boyertown’s Leo Egbe ran 10 times for 44 yards and Jon Myers ran five times for 17 yards to make up most of the Bears’ offensive production. Boyertown’s biggest offensive play of the night came late when backup freshman quarterback Ryder Gehris connected with fellow freshman Cole Yesavage for a 26-yard completion. Aaron Smith came up with an interception for the Bears on defense.

“We found a couple guys tonight who stepped up in key spots who were able to come in and make plays,” Boyertown coach T.J. Miller said. “I’m happy with Leo Egbe. He’s running the ball hard. Jon Myers and Roman Marinello. We’re in the situation where we have a bunch of guys who can run the ball, carry the ball, catch the ball. We’ve gotta be able to get them the ball in different ways.”

Senior Celebration >> With so much uncertainty about this season, Owen J. Roberts celebrated its Senior Night before Friday’s opener rather than its final home of game of the year like most seasons. The Wildcats have 11 seniors in DeNardo, Grossi, Meacham, Quinn, Matt Cutrone, Ethan Eckerdt, Tyler Cute, Olivia Kqira, Aiden Tamms and Richie Nathan.

Short Notice >> With OJR starting QB Matt Cutrone dealing with an injury that kept him from effectively throwing the ball, Reed got his first varsity start on short notice. The sophomore tossed one interception and mishandled the snap a few times, but he put together a solid performance in guiding the OJR offense, completing 5-of-10 throws for 87 yards to go along with the rushing score. Cutrone also took some snaps at QB, running twice for 19 yards.

“I had to go to the game plan and figure out what he could do, what he couldn’t do, what he’s comfortable with,” Kolka said. “He did a really nice job commanding the offense.”

Odd Days >> With no band and only a couple dozen fans in the stands, Friday night’s game lacked the typical atmosphere of PAC football game. The two team’s set up their outdoor ‘locker rooms’ beyond the end zone on opposite sides of the field before the game.