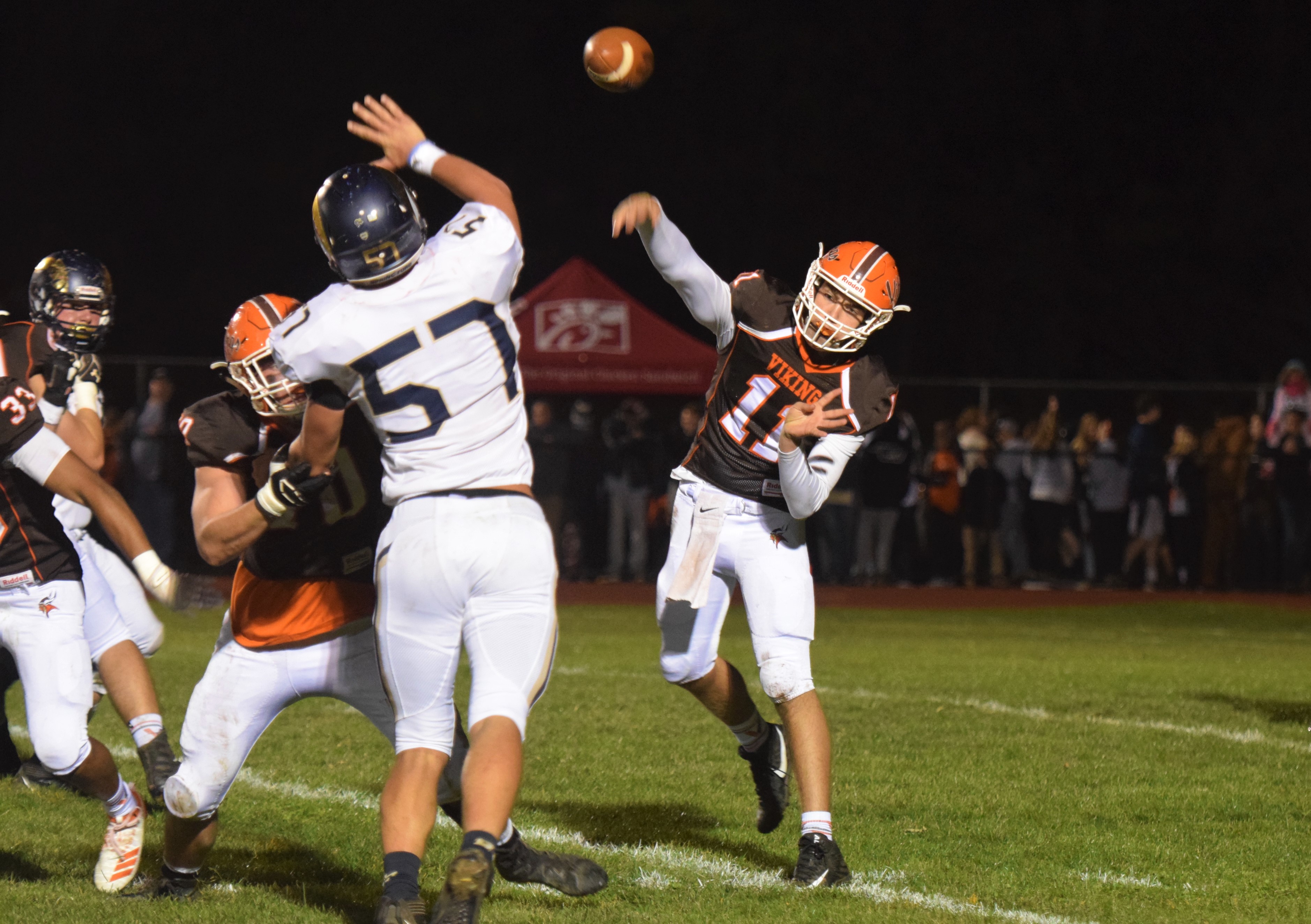 Neither team has played a single down since November, but it’s safe to say Spring-Ford and Perkiomen Valley have worked harder to get to this year’s game than any other in the past.

It’s a different type of work, to be sure. For the past couple years, the Rams and Vikings battled through arduous non-conference slates before meeting in the regular season’s final week with the Liberty Division title at stake. So when Pioneer Athletic Conference football schedules were released early in 2020, it was a bit alarming to see the archrivals poised to start the conference season against one another.

“Covid-19 has reminded us what a blessing football is,” said Perkiomen Valley coach Rob Heist. “We’re thankful for the privilege of being out on the field together, working toward a common goal. For us, our team, and our captains, it’s about the resolve and ability to overcome adversity.”

“It’s been so encouraging to see the determination of our players and our parents since July 1st,” added Chad Brubaker, Heist’s Spring-Ford counterpart. “They’ve kept their eye on our first game, although we had no idea when that would be.”

With non-conference play eliminated, the new schedules had Perkiomen Valley as Spring-Ford’s first opponent overall. There’s a reason why rivalry games are typically saved for the end of the season, but in 2020 the coaches wouldn’t have it any other way.

“Rob [Heist] and I agreed we’d rather play this game right out of the chute because we don’t know what the future holds,” Brubaker said in preseason. “We won’t play any scrimmages, we didn’t have spring practice, so certain challenges are new this season.”

On the field, competition has been intense for a Vikings team that returns only four combined starters (out of a possible 22 spots on offense and defense from last year’s 7-4 squad. For Perkiomen Valley, perhaps their greatest advantage lies in having junior quarterback Ethan Kohler back for his second year as the starter. Kohler saw extensive playing time as a freshman, leading a comeback victory for the Vikings over Spring-Ford at Coach McNelly Stadium in 2018, before taking the reins full-time last season. In an abbreviated season, matching his 2019 numbers (61 percent completions, 2,249 yards, 21 TDs/6 INTs) isn’t a realistic goal, but taking a step forward as an on-field leader will be the focus.

Offensive tackle Taylor Hartner also returns to his role, but otherwise the PV offense will be composed of first-year starters. Sophomore Rasheem Grayson shined on special teams and in a limited role on offense as a freshman, while Tyler Marshall impressed on both sides of the ball in recent practices and in the Vikings’ inter-squad scrimmage. Perhaps best of all, Heist lauded the improved cohesion of his offensive and defensive lines going into the game that has become an annual highlight on the local high school sports calendar.

“It’s Spring-Ford,” Heist said succinctly. “We know they’re always well-coached, well-prepared, and this year they have a stable of backs with strong offensive linemen returning. They always have a terrific defensive game plan for us.”

The Rams may not be replacing as many starters as the Vikings, but they lose a half-dozen first team All-Area performers, not the least of which is 2019 Mercury Player of the Year quarterback Ryan Engro. Ryan Freed, a junior, will get the first crack at stepping in behind center, and he’ll have no shortage of playmakers to choose from in the offensive skill positions. Junior Harry Adieyefeh figures to split carries with senior two-way standout Andrew Yoon, and they’ll be following an offensive line powered by seniors Kyle Kennedy and Ryan Beppel.

Brubaker expressed particular excitement about having Yoon back at 100 percent after injuries curtailed his sophomore and junior years.

“He’s going to have a tremendous season,” the coach predicted.

Nicholas Teets, another two-way performer (WR/SS), is the Rams’ leading returning receiver, and will be joined on the outside by a rotating cast of skill players hoping to fill the shoes of All-Area WR Dante Bonanni, plus Blaize Scarcelle, Zach High, and BJ Beard, all of whom graduated from last year’s championship squad. Senior tight end Josh Hellauer hopes to add another dimension to the Rams’ passing game.

Normally, the Spring-Ford/Perkiomen Valley game is the culmination of a season’s worth of ups and downs, wins and losses – the defining moment of a long campaign. But by the time the two sides kick off in Royersford Friday night they will have overcome enough ups and downs to last us a decade. Perhaps leading off the season with the rivalry showdown is appropriate for 2020.

“The biggest challenge is no spring practice, no team camp, and limited reps in the preseason,” Brubaker said. “And PV is in the same situation. It feels like the X’s and O’s of football are so far down the list, because we have to plan differently with all the precautions and restrictions we’re implementing.”

For the visiting Wildcats, Friday night will see Matt Cutrone make his debut under center. Cutrone led the PAC with an eye-popping nine interceptions in the Wildcats’ secondary a year ago. As such, he’s got experience in reading a quarterback’s tendencies and taking advantage of mistakes and will incorporate that knowledge into his own offensive game.

“Matt has overall athleticism, he runs well, and he’s got a good arm,” said Kolka during preseason. “He has a hard role to fill, but Matt’s had varsity experience. He knows the pressures and he’s doing really well.”

“They’re facing a challenge, opening with a midline team like Boyertown,” said Kolka. “It’ not something we’ll see every week.

“They’re big and athletic, and they’re awfully fast on defense,” Miller said of OJR. “The challenge is finding a way to match that, because if we lose track of our assignments, we could be in trouble.”

Cody Akins, Anthony Bauer, and Kyle Pry will be keys up front to the Bears’ newly diversified offense. Noah Segal takes over at quarterback after the graduation of Mason Marinello, and he’ll be supported by lightning-fast junior Leo Egbe and hard-nosed Jon Myers in the backfield. But it’s on the outside where the Bears enjoy some newfound offensive diversity in the form of pass catchers Luke Ordway, Connor Rohrbach, and Roman Marinello, the latter of whom received particular attention from Miller as being instrumental to Friday night’s effort on both sides of the ball.

Methacton at Upper Perkiomen >> The host Tribe are going with a “quality over quantity” approach, as coach Tom Hontz acknowledged a lack of numbers in preseason camp but expressed excitement about the return of several starters, including Logan Simmon, who led the PAC in rushing in the early going in 2019 before an injury curtailed his campaign. Hunter Flack is back at quarterback, with Malachi Duka returning to the wideout role that earned him all-league recognition last season.

The challenge will be in that Upper Perkiomen is the sole Frontier Division participant in this year’s PAC football season, so they’ll be fighting up in weight class – figuratively, every week, and quite literally this week against the size of Methacton’s offensive front powered by Mario D’Addesi and Dan Meier. Justin Gumienny and Brian Dickey were standouts in the Warriors’ inter-squad scrimmage.

“Upper Perk’s versatile, with all the returning starters in their play-making positions,” said Methacton coach Dave Lotier. “Any of those guys can break a big play, we can’t key on any one individual. They also return Riley Decker, who was one of the league’s top linemen. He’ll be a key for them in countering our size.”

Coverage/Streaming Capabilities: Upper Perkiomen has installed live-stream cameras on campus.  All home games will be covered via the NFHS Network. The school district plans to purchase an account for the 2020-2021 school year where all regular season home games will stream for free. Visit this link to create a free account.

Muhlenberg (0-1) at Daniel Boone (1-0) >> The Blazers submitted an early nominee for Game of the Year honors with last week’s seesaw, last-second 43-42 victory at Twin Valley, the winning points coming via a wrinkle off the “Philly Special” on a two-point conversion with only seconds remaining. Riding the momentum of such a thrilling opener into this week’s home game with Muhlenberg is the hope, but Boone coach Rob Flowers is equally wary of a letdown after such an emotional victory.

Repeat performances from quarterback Carter Speyerer (four total TDs), WR Alex Vassallo (nine catches, 125 yards, TD), and RB A.J. Hofer will be keys against a Muhlenberg squad looking to bounce back after an opening loss to Notre Dame-Green Pond. Flowers anticipates Muhlenberg emphasizing the need to beat the Blazers to the edge to limit big plays offensively and says he can see they have the speed to do it.