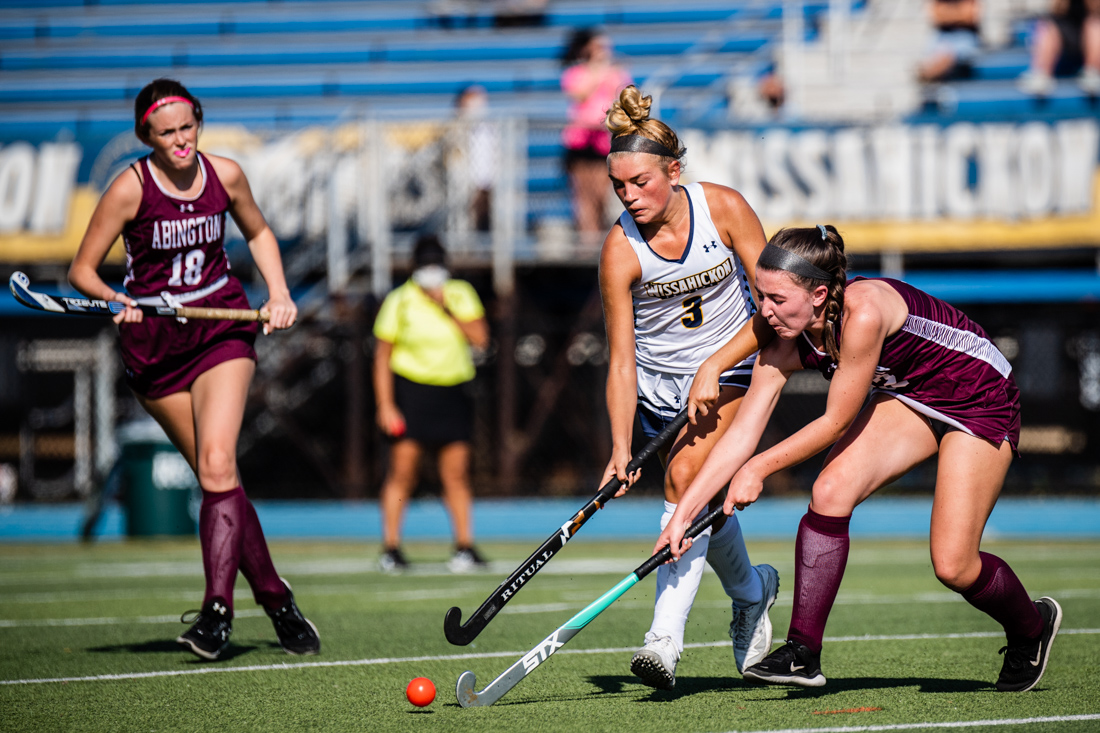 It was a balanced offensive day for the Trojans (2-0) with seven different players finding the back of the cage. Kendal Williams, Ella Hummel and Kate Lovensheimer each scored twice while Kendall Crowley, Brynne Miller, Julia Schools and Caroline Kirkpatrick each scored once.

“Our offense is looking up, passing and talking,” Miller said. “If we don’t talk then we’re going in the same places and everyone gets obstruction and it’s (Abington’s) ball and we have to go on defense.”

Williams scored the first two goals. She put Wiss up just 42 seconds into the game and doubled the lead six minutes later after a pair of beautiful passes from Miller and Aiden Drabick set her up in front of the cage.

Wissahickon’s Aiden Drabick (8) moves the ball up field against Abington during their game on Wednesday, Sept. 23, 2020. (James Beaver/For MediaNews Group)

“We made sure to look up all the time so that we’re not causing obstruction,” Miller said of the team’s passing in the circle. “We work on corners and inside the circle and just making sure we look up to make sure we don’t cause a foul to make us go the other way.”

Williams exited the game in the middle of the first quarter after suffering a lower body injury when she got tangled up with Abington’s goalie.

The rest of the Trojans picked up where she left off. Hummel and Lovensheimer alternated goals — two apiece — over the final 6:35 of the first quarter to build a 6-0 lead.

The scoring slowed down after the first quarter, but Wiss still managed to control possession for nearly the entire game and found the back of the cage in every quarter. Crowley and Miller each scored in the second quarter, Schools in the third and Kirkpatrick in the fourth.

Wissahickon’s Ella Hummel (27) sends the ball in on a corner against Abington during their game on Wednesday, Sept. 23, 2020. (James Beaver/For MediaNews Group)

“We try to contain ourselves to make sure we’re playing with the ball and looking up,” Miller said of the Trojans playing on the offensive half for the majority of the game. “We just try to make sure we’re not going into their sticks.”

Ghosts (0-2) goalkeeper Marilyn Capps finished the game with seven saves, including an impressive stop of a lifted shot on a penalty corner in the second quarter.