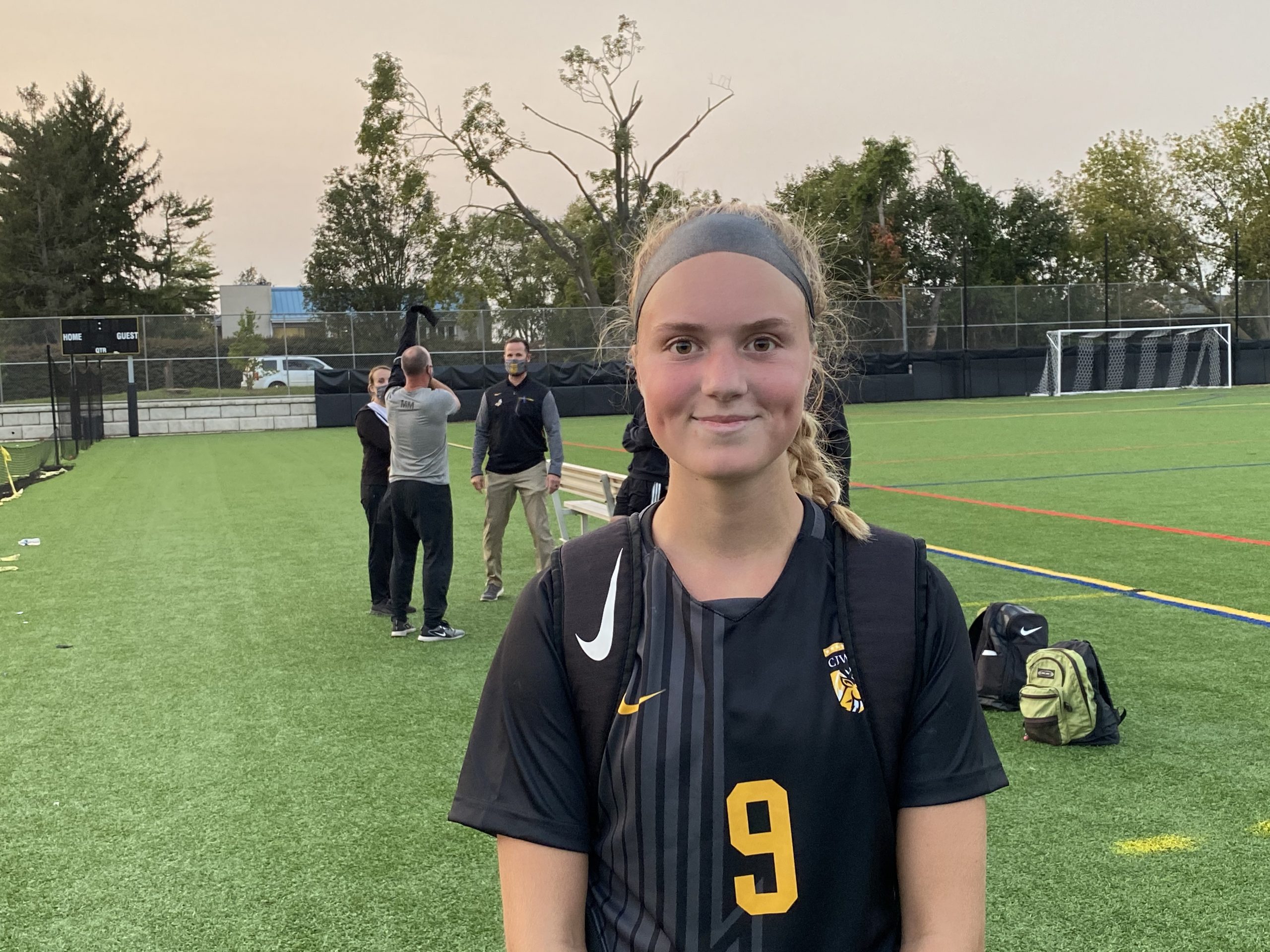 “I wanted to score really badly,” she said.

It didn’t take long for the junior to find the back of the net– scoring less than four minutes into Bucks’ Suburban One League Colonial Division contest with visiting North Penn. Moyer proceeded to strike for a second midway through the first half and West used the fast start to best the Knights 3-1 at the Coach Pettine Sports Complex.

Riley Corona gave the Bucks (1-0-0, 1-0-0 division) a 3-0 lead in the second half before North Penn avoided the shutout when Andie Salmon scored on a penalty kick with 15:30 remaining.

GIRLS #SOCCER: @taylor_moyer24 races to get a through ball behind the North Penn defense & delivers a shot into the opposite corner for her 2nd goal of the game & a 2-0 @CBWGirlsSoccer lead 18:00 1H. pic.twitter.com/4e0DHTxIPA

The opening match was a frustrating one for the Knights (0-1-0, 0-1-0) as they fell behind early and could not generate many chances to mount a comeback effort.

“I think we came out flat, I think the girls would admit that,” North Penn co-head coach Mike Rio said. “They took advantage of it definitely from the start, they came out strong, they brought it to us, obviously got a little injury there at the start which kind of threw things off too but we need the girls to step up and as a team we didn’t really work hard enough today to give us a chance to stay in the game.

“Give it to West, again, they came out hot, they got those two goals and they were able to hold it and get another one in the second half, so it’s good for them.”

Moyer’s two tallies came in somewhat similar fashion, the junior getting to a through ball before placing shots into the far left corner, although her second goal necessitated a bit more running to chase down a pass from the midfield.

“Just mainly staying on their last person, as far back as I can without being offsides and then right when my teammate kicks the ball is when to go,” Moyer said. “And then I just use all my speed and try to beat them.”

Both teams’ next game is on the road against Pennridge. North Penn visits the Rams 3:30 p.m. Thursday while West takes on the defending District 1-4A champs 7 p.m. Tuesday.

GIRLS #SOCCER: @CBWGirlsSoccer’s Riley Corona has her first shot stopped by stays with it and puts her second try in the net for a 3-0 Bucks lead 2H vs. North Penn. pic.twitter.com/Ekktd71IHA

The SOL Colonial Division looks set to be a tough battle between its six teams – five of its programs having reached a PIAA title game since 2014. Four teams made districts in 2019 while North Penn and Pennridge both qualified for states.

“All the Central Bucks schools, Pennridge, Souderton, every game you play, it’s a dogfight,” Rio said. “And this game got super-physical for both team I think we were giving it back and forth there and those are the kind of games. They’re going to be nitty-gritty, tough games.”

Moyer’s opening strike came 37:55 in the first half, getting the ball near the right corner of the 18-yard box before sending a shot inside the opposite corner for the quick 1-0 advantage.

“She just got through us, beat us and again props to West, they came in, they were ready to go,” Rio said. “They played a couple nice balls in and they finished. They took their chances and they put them in the back of the net.”

West went up 2-0 when Moyer made it a brace at 18:00, using a well-timed run to reach a through ball from the midfield before staying ahead of two defender and ripping a shot that again found the far left corner.

“The same thing, they just played it, perfect ball into the back, in between their gap between their backs and just found the corner,” Moyer said. “What I’ve been working on in practice.”

Corona pushed the Bucks’ lead to 3-0 at 28:59. Her initial shot was blocked by the outcoming goalkeeper but the ball deflected back to her feet and Corona knocked it in to the open net.

The Knights registered their first goal of 2020 with 15:30 left when the Bucks were called for a handball on a corner kick sent into the box. Salmon converted the penalty kick by calmly putting her shot into the right side of the goal.

“I think she kind of stepped up, our normal PK takers were on the bench at that point,” said Rio of Salmon. “So she was out there and she was like no one else really stepped up for it and she said she’d take it. She had a great left-footed shot, so feel confident in her stepping up and obviously she drilled it. So it was good for her to jump in there and get a goal in her first game.”