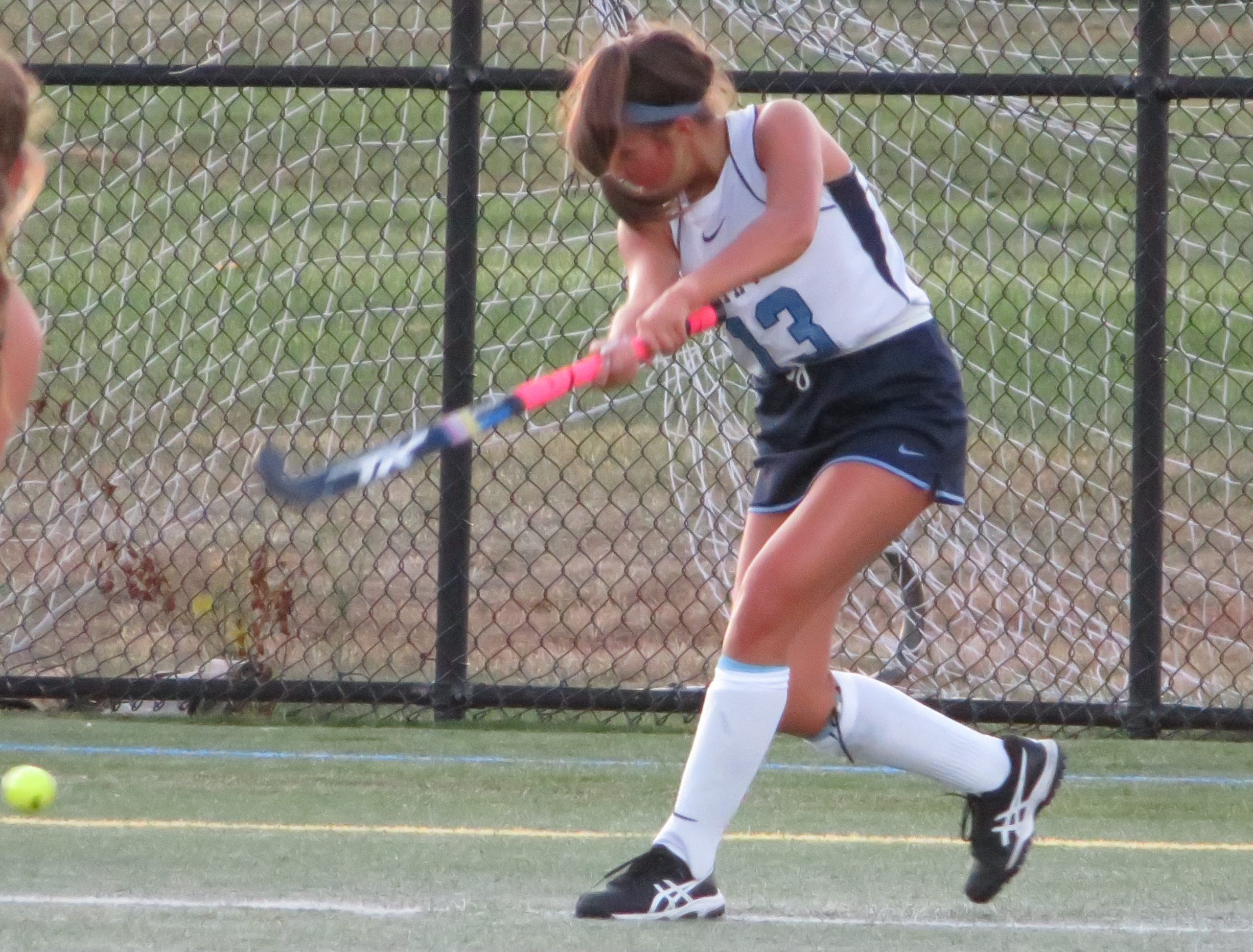 TOWAMENCIN >> North Penn opened its season by scoring in the first quarter against Central Bucks West. That goal proved to be all the Knights needed in a 1-0 Suburban One League Colonial Division win Monday evening at North Penn High School.

Riley O’Donnell sent a pass in front of the net from the right side of the field. The ball made it all the way to Katie Blanch on the far side who found the back of the cage for the game’s only goal.

“(The pass) missed one of my teammates and it came towards me,” Blanch said. “I hit it before the goalie could react. It went in the goal and it was a lift. It looked really sweet.”

“It was a beautiful pass and Katie Blanch, she’s just got a really fancy stick,” North Penn coach Shannon McCracken said. “She’s very creative with the ball. She had a really nice touch.”

The Knights (1-0) dominated the rest of the first half, but couldn’t score again. They earned seven penalty corners in the second quarter alone, but the Bucks (0-1) were able to clear the zone and stay within one goal.

“(Our defense) really stood strong,” Bucks coach David DeAngelis said. “North Penn created a lot of opportunities for themselves, but we need to help our keeper out a little bit and our defensive unit – getting more pressure, owning the ball through the midfield and trying to get up top to get more opportunities. Our defense played as strong as it could. North Penn had that one great goal.”

“We don’t have a lot of varsity experience this year,” DeAngelis said. “I think we lost like six folks and there was a lot of turnover with the players this year, so I think the promising spots were that we had some players who were starting to get a feel for each other. No preseason, no summer leagues or any of that – same for North Penn – it’s just that experience that we’re getting now in competition. We’re going to need to get that quick and then try to adjust as we start playing other teams.”

Aside from that four-minute stretch, North Penn controlled possession for most of the game.

“Possession’s huge in hockey,” McCracken said. “That’s something we’ve been able to work on in the preseason because of some of the restrictions we’ve had – we did a lot of passing and receiving. We should’ve received the ball a little better tonight – we were almost one step away from a great play tonight but we mishandled the ball a little bit – but we did maintain a lot of possession and we out-cornered CB West tonight and I think that made a huge difference.”

“We’re really aware on the field,” Blanch added. “We had really good passes. We can really scan the field – I think that’s a quality of our team that I really appreciate. I also love how my teammates are able to get the ball up the field to me even when I’m far out of reach.”

The Bucks had two corners in the final five minutes of the fourth quarter, but the North Penn defense didn’t give an inch. On the first corner with five minutes left in the game, Knights midfielder Maddie Waldspurger rushed out of the cage and stole the ball before the Bucks could take a shot.

O’Donnell almost had an assist a few minutes before setting up the game’s only goal. Similar to her assist, she sent a pass in front of the net from the right side, only this time no one was able to finish the scoring opportunity.

O’Donnell is one of three freshmen who played for the Knights Monday night.

“It’s been exciting,” McCracken said. “We have three freshmen on varsity this year – Riley and her twin sister Kerry O’Donnell and a back Melissa Sessler … They’re doing great things for us. We already have some great talent. We have a strong senior class. To add some young freshmen legs to that group is awesome.”