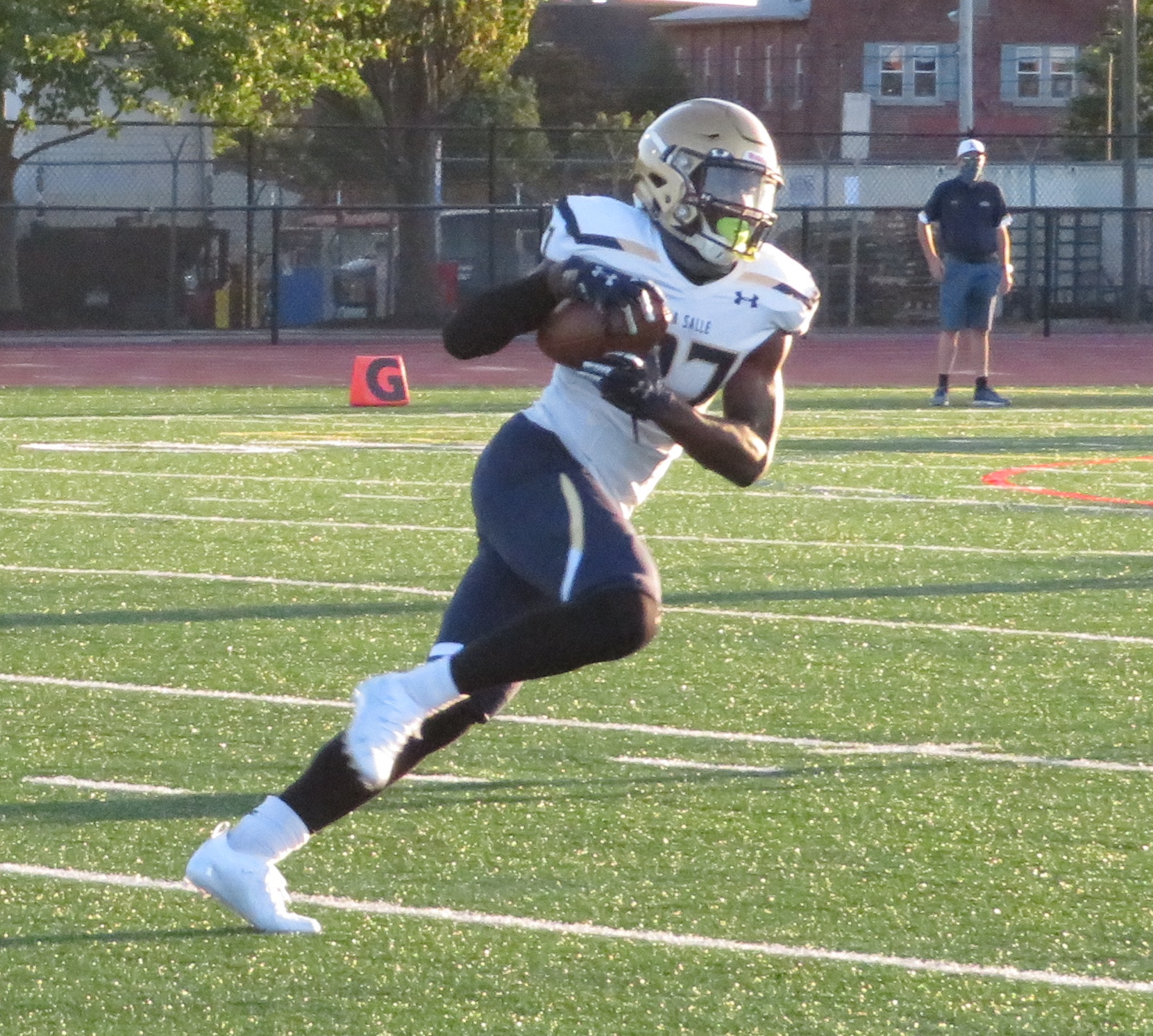 La Salle's Sam Brown runs with the ball prior to the Explorers' game against Manheim Township on Friday, Sept. 18, 2020. (Ed Morlock/MediaNews Group)

MANHEIM >> The La Salle College High School football team may only play a few games this season, but if the opener is any indication running back Sam Brown is still going to get a full year’s worth of highlights.

“Everything (was working),” Brown said, “but I can’t do it without my guys, especially my guys up front, the wide receivers on the outside. They made the blocks for me and I just took what they gave me.”

Brown got started right away. On the Explorers (1-0) first possession, Brown took his second carry for a 28-yard touchdown. He only received two carries in the second quarter and both went for scores – the first a beautiful 20-yard cutback run on the first play of the quarter and the second a 67-yard sprint to make it 21-6 in the final minute of the first half.

“As soon as I cut I could’ve kept it straight but I thought I would get caught,” he said of the second of his three first-half touchdowns, “so I bent it back and just broke it.”

Brown’s impact in the passing game came in the fourth quarter. He caught a swing pass on 4th-and-4, broke through a few tackles and raced 25 yards to the end zone.

“I saw them on the outside,” he said. “I was looking to go outside but I cut it back in. I saw a little hole there. I saw (a Manheim Township defender) and I knew I had to lower my shoulder. I spun out of it and scored.”

Brown’s receiving touchdown capped off the biggest drive of the night for La Salle.

After having a 28-6 halftime lead trimmed to 28-20 in the final seconds of the third quarter, the Explorers took over at their own 20-yard line. They responded to Manheim Township’s rally with a 13-play, 80-yard drive that took up 5:07. Brown’s score gave them a 35-20 lead with 6:59 remaining in the game.

“That drive was really big,” Brown said. “I knew we had to make a play. They made a good comeback on us. I knew I had to step up and make a play in a big-time situation.”

Nine of the drive’s 13 plays were on the ground. Brown carried six times for 28 yards.  Quarterback Gavin Daly was 2-for-3 through the air on the drive, converting a 3rd-and-7 to Justin Machita and getting the ball to Brown on the critical 4th-and-4.

La Salle honored the late Isaiah Turner, the senior lineman who died two weeks ago after a practice. The offense took the field for the first time against Manheim Township with only 10 players. After a delay of game penalty, which the Blue Streaks declined, an 11th player filled in at guard.

“We wanted to win this game for ‘Zay,’” Brown said. “We have two more games coming up. We’re just dedicating the whole season to him.”

“He’s just always with us,” defensive back Brennan Miller said. “It was tough the past couple weeks. Now that we’ve gone through the ceremonies and stuff, we just keep him in our memories, always keep him present.”

Despite the final score of 35-27, it was a solid performance for La Salle’s defense. Manheim Township scored touchdowns via punt return and interception return, leaving the Explorers defense responsible for only 14 points.

“I think we played well,” Miller said. “There’s always stuff we have to work on. I’m not saying we didn’t do a good job, but we have a game in two weeks so we have to focus the next two weeks.”