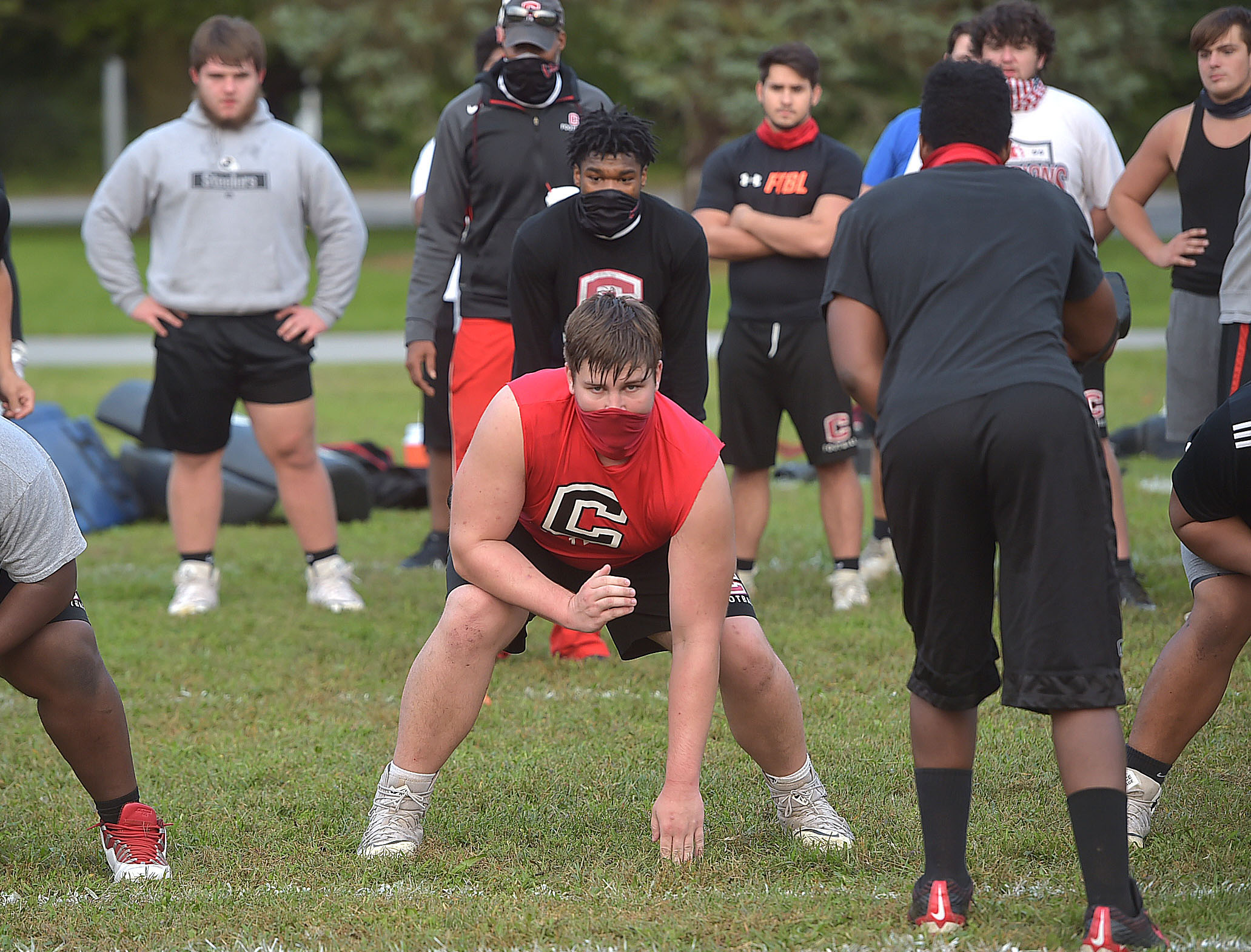 CALN >> The past four seasons of Coatesville football saw the Red Raiders ascend to heights even a storied program like theirs had never seen before.

Two District 1 championships (and one runner-up), two appearances in the state semifinals, three straight outright Ches-Mont League championships, and a shared title in the fourth.

During that recent run of greatness, the skill positions were manned by eventual Division 1 athletes like Ricky Ortega, Dapree Bryant, Aaron Young and his brother Avery. But, what makes the passes click and the runs go the distance is a sturdy offensive line filled with big, angry young men.

One of those angry young men for the 2020 Coatesville squad is 6-foot-4, 285-pound lineman Jake Walton. Walton is a returning starter, one of three returning Red Raider linemen who have been given the job of opening up holes for the Coatesville running backs and giving the new quarterback time to hit all those speedy receivers.

“Me and my teammates have seen a lot of winning since we were freshmen,” Walton said. “We have a culture here and we plan on keeping things going this season whenever we get started. It’s been tough not knowing when the season will start because of the COVID-19 virus but we have been putting in a lot of time in the weight room and we had a great offseason of workouts.

“I mean, you wait for your senior season and you look forward to it and I am really looking forward to getting things going,” Walton said. “I am optimistic we will have a season and I know we are ready. I feel we have the best O-Line in the Ches-Mont League and we have two really quick and strong running backs. I think we can go as far or farther than we did last year. We just have to be ready and we can control only the things we can control so it does not do any good to get down.”

Coatesville, like the other Ches-Mont League teams, are waiting for the go-ahead to start the 2020 season.

Sources told the Daily Local News Thursday that the league will not make a comprehensive decision on the season, but will allow each school to decide. Once those decisions are made, a schedule will be created with the hope of playing at least a few games this fall.

Offensive assistant coach Pete Susi is high on Walton and can’t wait to see him blocking live in game action.

“Jake brings a lot experience to our offensive line,” Susi said. “And he will carry on the tradition of big, nasty offensive linemen from Coatesville. He is one of three returning starters for us and we are looking for him to have a real big season for us.”

Walton is headed to Sacred Heart University after he graduates from Coatesville. He said his college decision was based on both academics and football.

“Sacred Heart is a real good place for me in a lot of ways,” Walton said. “They have a real good computer science program that I will be majoring in and they like to run the football a lot and that is right up my alley. I am really looking forward to going there but first is my senior season and I really think we can win the Ches-Mont championship. This is a real tough league and I know both of the Downingtown teams are real good but I feel we have enough talent to bring the Ches-Mont title home.”

At this point, no one knows who will win the Ches-Mont League championship in 2020 and even where and when the 2020 season will start.

One thing is certain, however: Coatesville will have a plethora of fast and skilled athletes that will shine brightly on the football field. It will be up to big, strong, angry young men like Jake Walton to give them that chance.