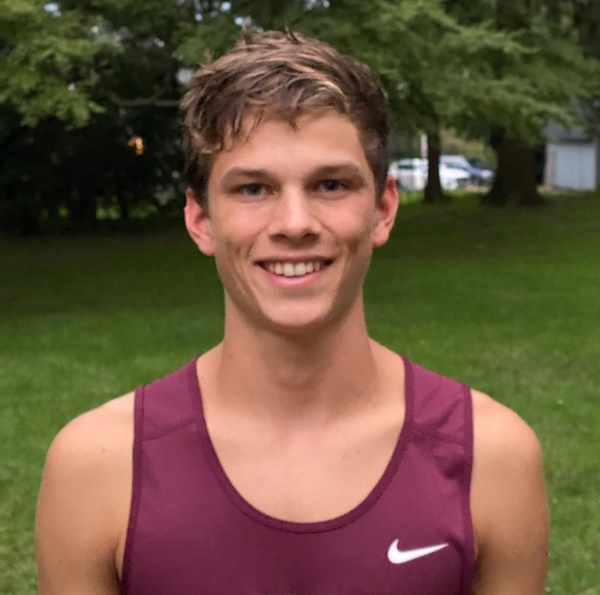 A senior, Charlie Miller finished 41st at the PIAA cross country state championships last fall and received the Pioneers’ Most Valuable Player award. He also was a standout runner for Conestoga’s indoor track team last winter in the two-mile run and the 5K. A National Honors Society member, he carries a 4.94 weighted GPA and is a Section Leader in the Conestoga Marching Band, for which he plays trombone. He also played in the Pit Orchestra for the school musical, and is a member of Jazz Ensemble, Wind Ensemble, Orchestra and Tri-M (Music Honor Society).

Q: What was your most vivid memory of the PIAA District 1 and state championships?

A: My favorite memory of Districts was when I crossed the finish line – I knew that I made states and I was so happy that all of the hard work that I did during the summer and all throughout the fall paid off. My most vivid memory of States was having to run up the many hills that were on that course. The hills along with the rain that morning made this course very difficult, and as soon as I finished the first mile, which was in the middle of a very long hill, I told myself to just keep on chugging. I kept myself motivated enough to capture a 41st place finish, which I am very proud of.

Q: What do you think was your best race last fall, and what was the key to your performance that day?

A: I think that my best race of last fall was one of our Central League meets at our home course at Mill Road. This course is very tough and it was around 85-90 degrees that day, so the conditions were not in my favor. However, right before the race, I told myself that I would come in first place for our team. I eventually did place first for my team and third overall at that meet, and even though that race sucked the life out of me, it gave me the confidence that I needed to be able to compete at a high level for the rest of the season.

Q: Tell us a little about your cross country training during the past summer, and your current practice regimen.

A: Unfortunately, I had an Achilles tendon problem during the beginning of the summer, so I decided to swim, aqua jog and bike for the majority of the summer and let my Achilles tendon heal. In the beginning of my training plan, I usually swam for around 40 minutes a day, three times a week. And for the other three days of the week, I would bike around 10-12 miles a day. As the summer went on, I transitioned from swimming to aqua jogging because I wanted to focus on my running form so that I was prepared when my injury completely healed. At the end of the summer, I was able to start running again, and I also did core exercises 2-3 times a week and weightlifting exercises 2-3 times every two weeks. As of right now, I am continuing to build up mileage and my core, and even though our cross country season has been postponed until the spring, I want to keep on building up my body so that I will be able to do really well in the spring.

A: The shoes that I use are called OnClouds. They are a shoe brand from Switzerland that make these really unique shoes that have a really nice fit and offer great support. I started using them because my other running shoes from last year caused my Achilles problem, but these shoes aren’t tight on your heels and they still offer awesome support. Overall, I favor shoes with a lot of support, but I do not want them to be too heavy. I prefer lighter shoes so they are easier on my feet and don’t weigh me down when I run.

A: My favorite is definitely Road Runner in King of Prussia. I really like this place because they have a machine that scans the bottom of your feet to make soles for your running shoes based on the shape of your foot as well as your arc. They also have running socks, foam rollers, and an array of many running shoes based on what you want. It’s an awesome store.

A: This summer, I started to work a lot on my core as well as my upper body. I’ve had a couple of injuries during past seasons because my upper body and core were not strong enough to run 35+ miles a week, and I think that if I can strengthen those muscles, then I won’t get injured as often and will be able to run more miles.

A: The night before a race, I pack all of my stuff – shoes, jersey, snacks, water, spikes – so that I don’t have to do those things in the morning, and so that I can sleep in for a little longer. As soon as I wake up, I start hydrating right away to get the fluids going. I don’t eat a big breakfast, something light because a lot of our invitationals are in the morning, so I don’t have to deal with any stomach pains during the race. Throughout the morning and afternoon, I also eat lighter snacks to keep my energy level up. And before the race, I always like to relax and listen to some music for 20-30 minutes.

A: In college, I think that I want to major in accounting. It’s something that both of my parents majored in and I am also a numbers person, so I think that I will enjoy it. However, I am also interested in Computer Science. I am taking a Comp Sci class this year and am really excited to learn how to code.

Person I most admire, why: “My grandfather because he is a wise man who gives me great advice on life, and he has always found time to come watch my sports games. Whether it was eight years ago or today, he has always been there.