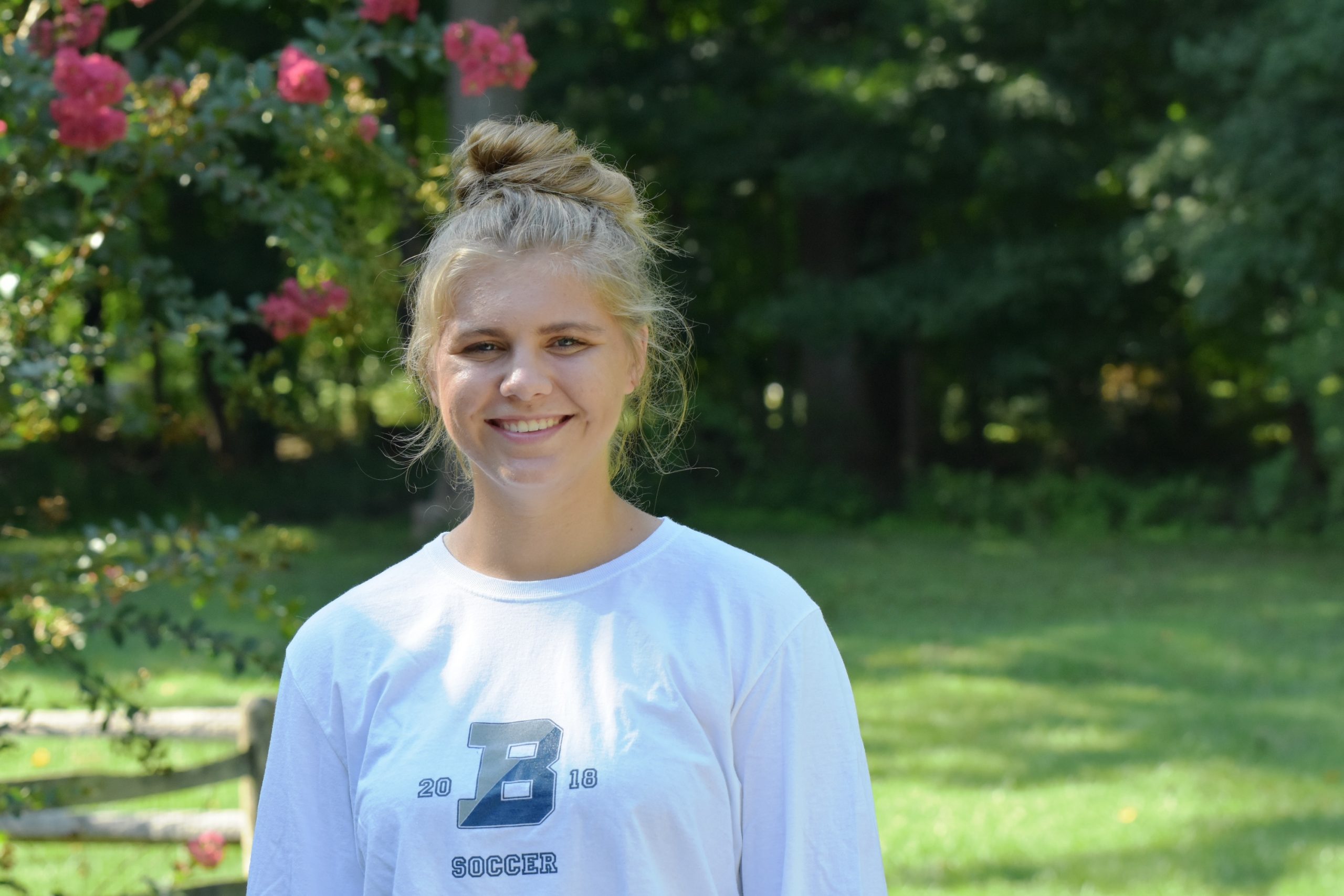 A senior midfielder/defender and Baldwin soccer team captain, Levinson, a second team All-Main Line selection last fall, is a fourth-year starter who is extremely versatile, also having played goalie for the Polar Bears. She is a member of the elite FC USA Philadelphia club soccer team, as well as a member of the EPYSA Olympic Development Program squad. Levinson has been a starter for the Baldwin varsity basketball team since eighth grade.

Q: Last year, Baldwin soccer produced its fourth straight season with double-digit wins, a school record. What is your most vivid memory of last season?

A: My most vivid memory of last season was our win against Episcopal with one second left in overtime. I was playing in goal because our normal goalie was injured.  There was about 10 seconds left in overtime and Episcopal got a free kick in our end of the field. Episcopal brought nearly everyone forward, and tried to crowd my zone. They then tried to play short, where one person touches it to someone else, and one of our more aggressive players, Brianna Wright, ran up quickly and intercepted the ball and passed it forward to Clara Page who was all alone behind the defenders.  Clara ran down the field and with two seconds left took a prep touch and shot. The ball hit the back of the net as the timer went off.  We had a very young team last year and this early win against EA was important for our team’s confidence.  It was also nice since it was the first time we played them after they defeated us in the PAISAA championship game the prior year.

Q: As a team captain and a versatile performer, how do you see your role on and off the field this coming season?

A: Since coming to Baldwin I’ve mostly played holding midfielder and sometimes defender but last year had to step in to play goal when our normal goalie got hurt. It was a bit overwhelming since I had not played there in seven years but fortunately it came back pretty quickly.  Assuming we get to play this year, I hope to get back to midfield where I can use my field vision and composure to help us control the game. However, since I have played literally every position at some point in my club career, I’m happy to play wherever Coach [Adrian] Cox needs me.  Off the field, it’s important to me that we maintain the strong soccer culture that Coach Cox has created and to make sure that our young team and players grow so Baldwin can be an even stronger team in the future. With Covid and without a fall season, this will be challenging, but I think making practices fun and doing some other team building activities will go a long way to help. I also hope to be thought of as someone that anyone on the team can turn to if they need help with something soccer related, school related, or just someone to talk to.

Q: What do you consider the strongest part of your game? What aspects of your game have you worked on the most in the off-season?

A: I would consider my field vision and my ability to intercept or head crosses and long balls out of the air. I see the field well and this helps me both defensively and offensively. It also allows me to be the player that often initiates a play that sets up our team’s goals even if I don’t score them myself. In the off-season I worked mostly on my speed and agility and also shooting from distance.  One of our best offensive players graduated last year and I want to be sure that I am ready to contribute offensively more than in the past if they need me to play that role.

Q: During the past six months of the COVID-19 pandemic, what have you found to be the biggest challenge in keeping your game in shape? Tell us a little about how you dealt with that challenge, and your plans for fall training.

A: As an only child, I didn’t really have anyone to practice with during the few months of quarantine, so we cleared out an area in my basement where I could juggle and work on foot skills and shooting. But it’s not the same as playing with other people so when my club started practicing this summer I found it took a little time to adjust.  To stay in shape I initially ran a lot and then when school was over in June I began working with a trainer three days a week; twice a week on fitness and agility and once on soccer skills.  My club team has started having some practices (socially distanced as much as possible) and we also played in a tournament in early August.  In the fall, I plan to practice with Baldwin, and also continue with soccer and fitness training on the other days.

Q: What has been your most memorable soccer experience outside of Baldwin – can you share it with us?

A: I had two great Olympic Development Program trips where I got to play in Barcelona and England.  Barcelona was especially amazing and fun given how beautiful it was and the fact that we played a wide variety of local teams.   But my most memorable experience with soccer outside of school was with FCUSA when we went to play in the Gothia Cup in Sweden a few years ago.   We first stayed in Denmark and scrimmaged some local teams there before travelling to Sweden to play in the tournament.  They had an incredible opening ceremony that was like a scaled down version of the Olympics.  I was honored to be one of our team captains for the tournament and I remember scoring a header goal in one of the first games to win with two minutes to go.  I was also proud that out of about 120 of the best teams in our age bracket from all over the world we were able to make it to the final 16, eventually losing to a team from Germany on penalty kicks.

Q: Tell us a little about your start in soccer. What originally attracted you to soccer? Who have been your most important soccer mentors, and what was the most important thing each of them taught you?

A: To be honest, I started to play soccer (and basketball and lacrosse and on and on) because my mom wanted me to do something athletic outside of the house.  I started as a goalie for Lower Merion Soccer Club however I never really liked playing in that position so I ended up switching teams when I was 10 years old to be a field player for FCEuropa. The team only stayed together for a year but I developed a great relationship with my coach, Danielle Fagan.  For the last seven years she has given me supplemental soccer training and has become a role model for me.  In addition to being a great trainer, she is an incredibly positive person and a very hard worker and I admire her outlook, energy, and positivity.  Four years ago I joined FCUSA with coach Mike Welsh and three years ago joined the varsity team at Baldwin with coach Adrian Cox.  They have been both incredibly supportive of me and my game and their confidence in me has in turn helped me gain more confidence in myself and let me grow as a player and a teammate.

A: When I was in middle school I had to get my ankles taped before playing and I met our athletic trainer, Kerrie Snead.  Kerrie is a great person and a very calming presence and I always enjoyed our short ankle taping sessions.  So now my routine before a game always includes stopping by the trainer’s office for a while before games to hang out and chat with Kerrie. Then once I get to the field I do a lot of stretching.  Now that I’m older, I am also trying to see how my teammates are doing and looking to see if anyone needs any help before the game starts.

Q: You wear uniform jersey No. 41 for Baldwin. Is there a reason you picked this number – does it have any significance to you?

A: In all of my club sports I wear No. 22.  It was my dad’s jersey number when he played ice hockey and when I was seven I picked a jersey with the No. 22 out from a pile of jerseys and my parents said it was fate.  However, for high school, the No. 22 jersey was a size too small and being almost 6 feet tall and liking my jerseys big, I realized that No. 22 was not going to happen.  So in freshman year I found that No. 41 was a large jersey and since our teams have been good since then I have continued to wear it for good luck.

Q: Do you participate in any other extracurricular activities at Baldwin other than soccer and basketball?

A: I love music and have had 10 years of piano lessons but more recently have been a member of the Baldwin A Cappella group, the Baldwin B-flats.  I have also been in various high school musicals and usually manage concessions for many of the upper and middle school shows.  I’m also a member of Model Congress, the Lamplighters (the touring/welcoming committee for prospective families), and I write a column for the school newspaper.

Q: What is your favorite course at Baldwin? What do you think you might want to major in at college? Is there a career field that particularly interests you at the present time?

A: My favorite course so far has been AT Chemistry. Not only did I find the subjects we covered interesting, but it gave me a chance to think outside the box and challenge myself with some of the concepts. I also loved the energy and environment in the classroom. When I go to college I hope to study a combination of science/technology (STEM) and business. While I haven’t focused too much on a career path yet, my goal would be to be involved in a business that is focused on creating or bringing to market some advanced technology that helps people improve their lives.

Favorite movie: Harry Potter and the Chamber of Secrets.

Favorite pre-game pump-up song: “Mama Mia – it was a Baldwin soccer pre-game tradition that really grew on me.”

Person I most admire, and why:  “My parents. They have inspired me to work hard in everything I do and have helped me understand the value of commitment, kindness and selflessness.”