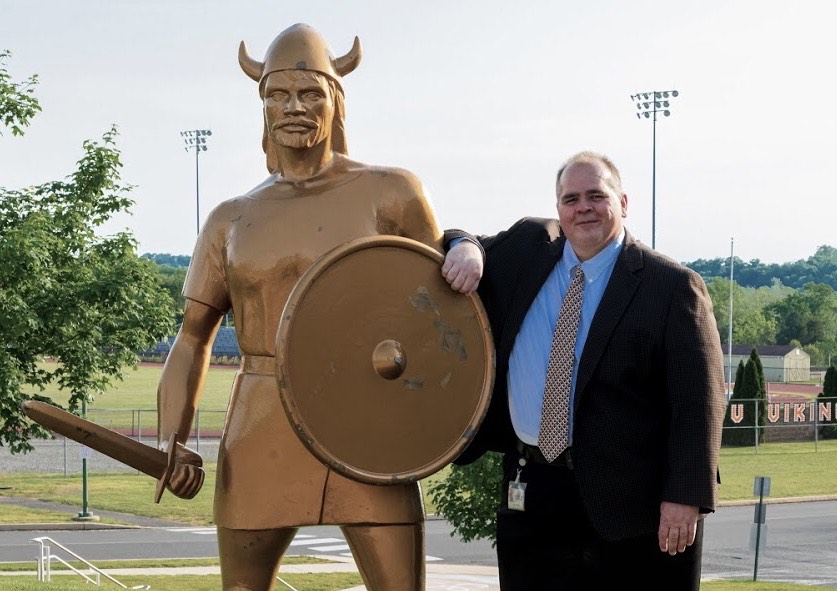 He described it as a “great ride.”

But after 34 years in the Perkiomen Valley School District, and the last 16 as high-school athletic director, Larry Glanski is heading off into the sunset.

Glanski announced his retirement from the AD’s post at the school board’s meeting in August. His departure, effective Oct. 30, closes the door on a career that offered both challenges and fulfillment within the growing Montgomery County school district.

“I was fortunate to be able to do it,” Glanski said.

During his time at PV, the alumnus of Owen J. Roberts High School (1981) and Kutztown University (1986) experienced life at the head of a classroom and as overseer of the high school’s athletic programs and facilities. He was also on the football team’s coaching staff of head coach Scott Fuhrman, track and field for 12 seasons and wrestling for five.

Glanski was heavily involved in sports during his own high school days. He was a member of the 1980 football team that finished as Ches-Mont League co-champion alongside Spring-Ford, a heavyweight wrestler for Howie Sage his senior year and a field-event specialist in boys track.

He went on to play football at Kutztown. The summer following his college graduation, he got a coaching position at Perk Valley.

“I’m appreciative PV gave me the opportunity,” he said. “I set out to be an elementary school teacher.”

High-school principal Dr. Cyndi Moss, who worked together with him for 15 years, lauded Glanski for his work ethic and connection to the PV youth.

“He is always an advocate for the students, and I have never seen him get mad,” Dr. Moss noted. “He is one of the hardest working people I know at school, working strange hours so he can be at the games and practices of all sports.

“With Larry, I know I don’t have to worry about anything around athletics. He takes care of the things he needs to.”

Glanski’s tenure as athletic director — he replaced Peg Pennepacker and served one school year in an interim status before becoming the permanent selection — came at a time when the Perk Valley district experienced considerable population growth. It went from being a small (Class AA) school to a big (Class AAAA/AAA) over the years, and it currently has the fourth-largest enrollment in the Pioneer Athletic Conference.

“I’ve seen both sides, smallest to largest. I like to think we’re more competitive, more relevant to District 1. We’ve had more state champions and state medalists.”

Glanski admitted the job has come with its challenges. The COVID-19 pandemic has offered a number, cancelling out the 2020 spring season and leaving its imprint on the fall 2020 plan; alongside it was the constant need to reschedule sports events when weather impacted the schedule.

“It’s a little bit like (the movie) Groundhog Day,” he said. “You spend a day rescheduling games, then the next day you could be doing it all over. Things change, and you have to change with them.

“In its own way, it’s a demanding job … long days, lot of demands on time, Saturdays. I’ve been fortunate to have the support of my family, especially my wife Tina.”

There are a number of pleasant memories Glanski has collected from his time at PV … memories that will stick with him as he heads into retirement.

“I’m going to miss watching the kids playing, wearing the brown and orange,” he said. “Getting close to coaches as well.

“I will miss hearing the Star Spangled Banner being sung by the school chorus, and the excitement people have at the start of a fall season … the enthusiasm, positivity and energy.”

“There’s a committee working to secure turf for the stadium and baseball field,” he said.

Dr. Moss has her own remembrance of Glanski’s time at PV.

“One of my favorite things about Larry is how he interacts with all students, not just the athletes,” she said. “Some of our life skills kids really took to Larry, and one in particular, TJ, loves him. Whenever he would see Larry at school, TJ would say ‘Hi coach’ and they would talk about fishing and all kinds of things.

“TJ graduated several years ago and whenever I see him he asks about Larry and we make a video to send to Larry of TJ saying ‘Hi coach’. Larry has made an impact.”