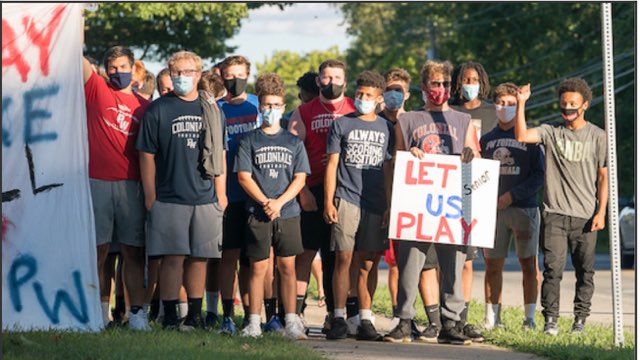 Plymouth Whitemarsh student-athletes and family rallied Sunday in hopes of having a football season this fall. (Courtesy Kim Supko Photography)

It’s been a tough week for Plymouth Whitemarsh football players. Thursday night they found out that the Colonial School Board voted 9-0 in favor of following the Montgomery County Health Department guidelines, which allow all fall sports to be played except for football.

“As soon as (the vote) happened I sat in my bed for probably an hour just staring at the ceiling thinking, ‘Wow, that just happened,’” senior Dylan Duran, who watched the board meeting start-to-finish, said. “Probably 12, 12:30 I had to get out of the house to get air. I left the house, went and got food at Wawa and I went to the stadium and just sat there, thinking and everything about what could have been and what happened. It was just a shock to me.”

“The Board has had to make difficult decisions during this pandemic,” Plymouth Whitemarsh Athletic Director RJ Bretz said. “The District understands the value of extra-curricular activities for our students.  We are disappointed for our students but understand the weight of the decision. To date, 42 of 90 District One schools have cancelled fall sports including several local districts.”

The players wanted their voices to be heard and planned a rally for Friday evening. After 20 of the other 23 Suburban One League schools opted to play football that morning, football players and members of the Plymouth Whitemarsh community stood in front of the high school encouraging those in power to let them play.

The players have hope something could change. While Bretz declined to comment on the finality of the district’s decision, Duran said one of his coaches told him the board could meet again and potentially change their mind.

“I’ve been trying to get as many people as possible,” the 2019 first team All-SOL American Conference tight end said, “teammates, coaches – we’re just trying to stay strong in this moment because it’s still all in the air. Hopefully it could change. It’s just hard because the board is tough. When they make their decisions they usually stick with them. It’s hard.”

Another possibility would be moving the football season to the spring.

“Provided it is safe,” Bretz said, “we would look to partner with other school districts who have postponed the fall in an effort to provide our students with the opportunity to play.”

Duran and the Colonials were looking forward to this season after the team took a big step forward in 2019, when they went 6-1 in league play and won their first District 1 playoff game in 20 years.

“There’s so much underrated talent that we have that wasn’t able to be shown last year because of how many seniors we had,” he said. “I always told them, ‘We’re a really good team, but we can be a really great team.’ The last month we’ve gotten so much closer as a team. We would do workouts after football workouts. We would go out on the field, go to the local gym, just every minute we can. We got so close together as a team becoming brothers and a family. For it all to just be shut down in a matter of hours, it was just heartbreaking. It just destroyed everybody on the team.”

Another reason Duran wants to play this season is because it’s his senior year. Not only is it his final chance to play with the friends he’s grown up with, but it’s the last opportunity to show college coaches what he can bring to their programs.

“The past month, month-and-a-half it’s really started to pick up with coaches contacting me and me contacting coaches,” the 2019 second team All-SOL American defensive end said. “The whole process is coming together, but right now it’s up in the air because a couple coaches were asking, waiting for senior film. That’s what coach (Dan) Chang would tell me – senior year is one of your biggest years when it comes to college recruiting and this year is going to be really important. Now, it’s all up in the air. I have no clue what’s going to happen, where I could go, what opportunities are going to come knocking at my door.”