Wait over as Upper Dublin’s Polin commits to East Stroudsburg 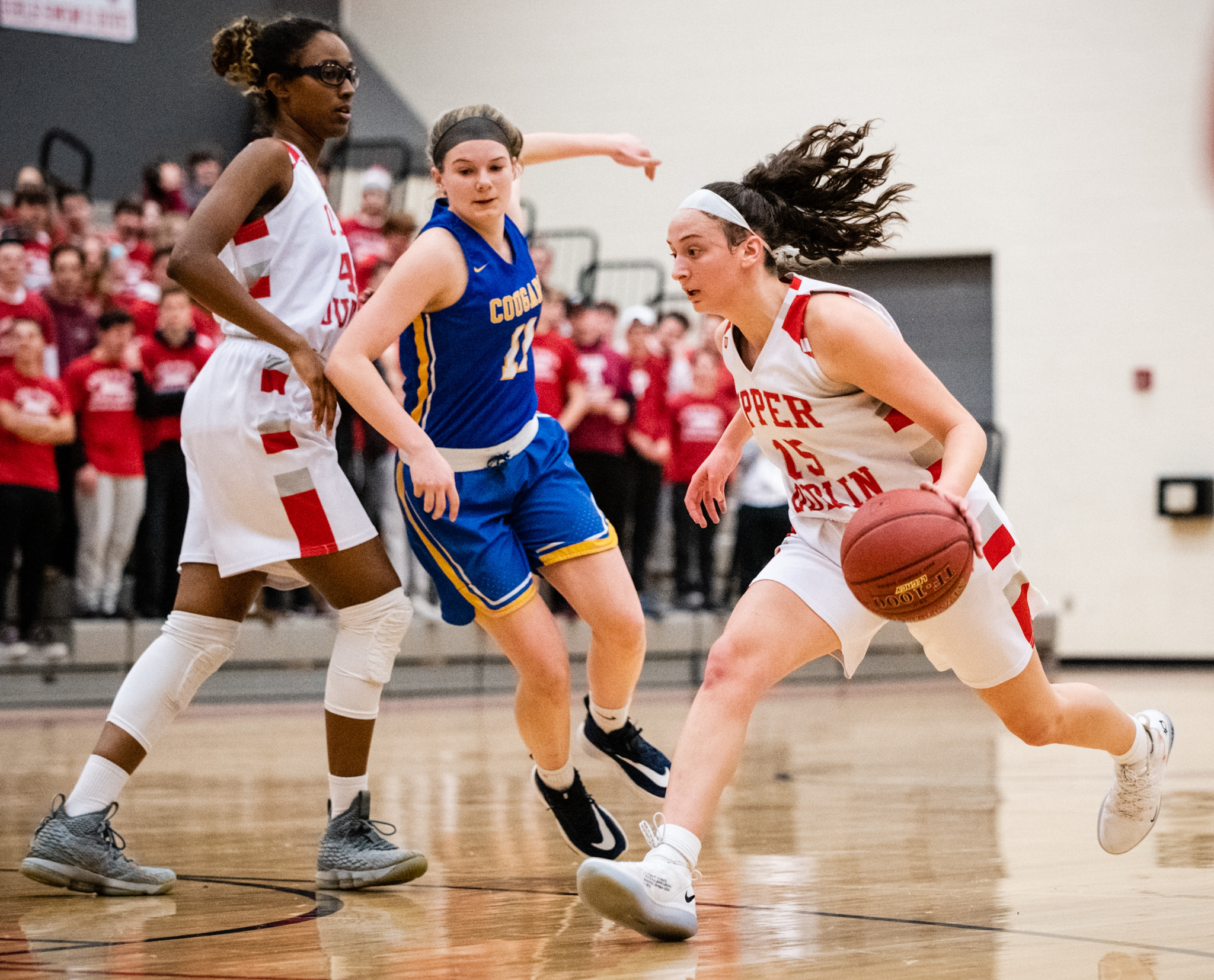 The rising senior at Upper Dublin knew from her first visit that East Stroudsburg was the place she would continue her basketball career, but she also didn’t have to commit on the spot. Playing out her junior year with the Cardinals and now back on the court with her Mid-Atlantic Magic AAU team, Polin kept her options open but couldn’t shake the impression the Warriors had left on her.

Having waited long enough, Polin didn’t put it off any longer and committed to East Stroudsburg on Thursday morning.

“I went on a visit there last fall right before the season and right away just clicked with the coaches,” Polin said Thursday afternoon. “When I left, I said I really like it here and this would definitely be one of my top choices. I loved the coaches, the players seemed to love it there, it’s a good location and I knew ‘this is a good fit for me.’ When they gave me an offer a couple months ago, I was really excited because they had become my top choice.”

Upper Dublins Jess Polin (15) directs traffic as she brings the ball up the court against Wissahickon during their game on Friday, Jan. 10, 2020. (James Beaver/For MediaNews Group)

Upper Dublin’s season ended in the PIAA 6A second round with a 47-40 loss to Bethel Park on March 10. Three days later, the outbreak of COVID-19 put the sports world on hold and left lingering effects like the NCAA recruiting dead period that was just extended to Sept. 30.

East Stroudsburg, which went 20-10 last season, was Polin’s first offer and while the 5-foot-9 guard had been in touch with a few other programs, it was her only offer as of Thursday. While the dead period has made recruiting much more difficult on players and coaches with no spring for open gyms and a late start to the AAU season, Polin said it wasn’t a factor in the timing of her decision.

Instead, waiting to make the announcement had only strengthened her desire to play for the Warriors.

“When they offered a couple months ago, I wanted to pull the trigger and get it over with but my parents and I talked and we were going to wait until the end of AAU season,” Polin said. “We talked again just last week and I said to my dad, ‘East Stroudsburg is my first choice and even if someone else offered me, I think I would still pick East Stroudsburg over them,’ and that’s when I decided I was going to commit.

“It wasn’t a matter of wanting to get it over with, it was the right fit for me and I was excited to call the coaches and commit to East Stroudsburg.”

GIRLS BASKETBALL: @UDHSCardinals @PolinJess from the logo beats the halftime buzzer against Bethel Park in PIAA 6A second round pic.twitter.com/T8w2fcpRgw

A three-year starter at Upper Dublin who will be in the starting five for the Cardinals however the 2020-21 PIAA season takes shape, Polin has made her name off long-distance shooting, facilitating, defense and a knack for clutch free throws in big games. Last year, the guard averaged 5.3 points per game, 3.6 rebounds, a team-high 5.5 rebounds and 2.1 steals per game and hit 82 percent of her free throws.

As a freshman, Polin’s even-keeled approach at the foul line was a critical component as the Cardinals captured the 2018 PIAA 6A championship. It was that season that also lit the spark to play in college.

“It’s always been a dream, every kid who plays sports dreams of playing at the next level but when I first realized it was real was after that freshman season,” Polin said. “Our team got a lot of attention and I got a lot of attention from that playoff run and that’s when coaches started to reach out, which was cool because I didn’t expect it as a freshman.”

Between the end of the high school season and the end of June, Polin worked out on her own, putting time in everywhere but especially her shooting until AAU teams could begin practicing. This summer is her first playing for the Magic but Polin said it was an easy transition and the team is coming off a 4-0 showing at the Hoop Group Showcase League last weekend.

With her AAU team, Polin plays more of a two-guard role while she’s essentially the point guard for Upper Dublin and the coaches at East Stroudsburg see her doing a little of both. The teams also play different styles on defense and offense, but Polin said she’s enjoyed the blend of styles.

The Magic’s roster is loaded with local players with Polin joining Noelle Baxter, Dana Kiefer, Bella Arcuri and Shannon Remolde as college commits. Polin said for her, it was a major relief having the East Stroudsburg offer and ability to contact the Warriors’ coaches but knows some of her teammates don’t have that same luxury.

“I hope that coaches are watching our games, they’re all available online and through livestreams,” Polin said. “It’s hard on my non-committed teammates, I was in the same boat until yesterday, it’s frustrating that you can’t see coaches at the games when last year they would be there sitting and watching. It’s a relief to know coaches are there in person and watching.”

GIRLS BASKETBALL: @UDHSCardinals @PolinJess spots a lane and takes it for a Q4 layup and 30-20 lead at Plymouth Whitemarsh pic.twitter.com/jP3HfXCjFM

Upper Dublin will have a different look this coming season with the graduation of forwards Jackie Vargas, Kara Grebe and Anajae Smith leaving the Cardinals with a guard-oriented roster. While the Cardinals haven’t had any formal workouts, Polin played pickup with classmates Sarah Eskew and Dayna Balasa, a USciences recruit, earlier this week as they prepare for their senior year.

“The most important thing I’ve learned there is you do everything as a team,” Polin said. “You win as a team, you lose as a team, there’s never one person to blame or one person to do it all, everything is done as a team. (Coach Morgan) Funsten preaches it and says ‘play simple,’ which is something everything who goes through the program learns, it’s a great program and I’m happy to be a part of it.”