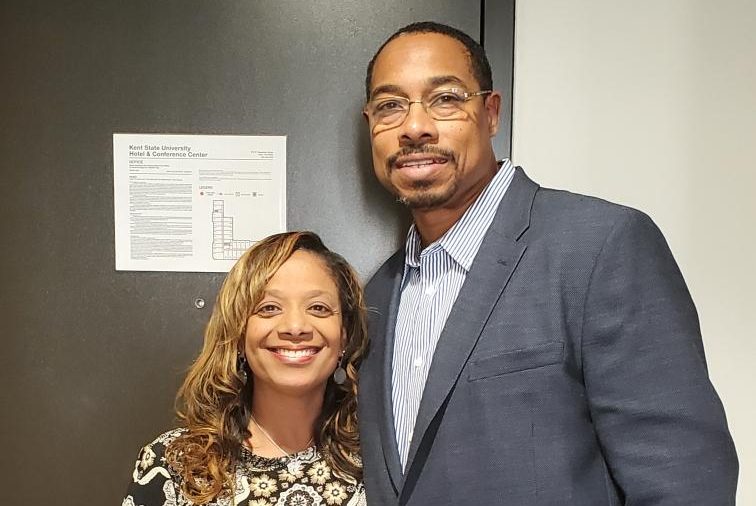 If you made a list of the people in Chester County who are making the biggest impact in helping student-athletes succeed, Tammy James and Keith Cochran would each be near the top.

James is the Coordinator of Academic Support Services for Student Athletes at West Chester University. Cochran is the only head basketball coach West Chester Rustin’s ever had.

They are making a difference in the athletic and academic realms for an array of students ranging from adolescents all the way to adulthood. And they are doing it together. James and Cochran are fast approaching their 19th wedding anniversary.

“We are able to look at things from the teacher or professor’s perspective, and from the coach’s perspective,” Cochran explained. “We share stories and ask advice of each other. But we are both advocates for the student-athlete.”

Individually, they are important. Together, their impact is off the charts. They are, without question, one of the preeminent power couples in local scholastics and athletics.

“They are having a huge effect on these kid’s lives,” said WCU head football coach Bill Zwaan. “That’s what makes them a power couple. They have such an influence in the end on so many, and they have a passion for it.”

Is almost impossible these days to get through a WCU sports banquet without having multiple student-athletes laud the impact ‘Dr. James’ had on their academic progress. With 17 seasons under his belt, Zwaan has seen it happen time and time again.

“She literally knows all of the kids,” he said. “Her door is wide open to them all of the time, and when they have issues that are beyond the classroom, she is always there for them.

“That’s why you hear them talk about her at the banquet. It’s not just that she helps them out as far as the classroom — for a lot of these at-risk kids, there are issues that they are dealing with off the field and they tie directly into how they are doing in the classroom. Maybe they have to miss school because something happened at home.”

And James is also very popular among the parents of student-athletes because she is an unabashed advocate for their son or daughter.

“Yes, the parents love me,” James said, without a hint of bravado. “You can see it at the banquets, when they come up to me and say that their son or daughter has talked about me.

“Everybody across our campus knows me because our students know I go hard for them. I treat them like my own. It’s what I would want somebody to do for my kids. They all know my goal for them is to graduate — how to balance athletics with their academic responsibilities. That’s the carrot that I have.”

Nobody understands the help James provides more than Cochran. He’s often referred seniors at Rustin, as well as former players, to James to answer questions and help them take the steps in order to get into college.

“It’s a blessing for me,” he said. “It’s been helpful knowing all the requirements.”

And it doesn’t end with acceptance into college or graduation from college.

“She develops relationships over the years, and the kids come back to thank her for the assistance, and kids need that,” Cochran said. “They need somebody they can go to talk to, and answer questions, and it grows into much more. It’s definitely impressive.”

PERSPECTIVE OF A STUDENT-ATHLETE

When West Chester Rustin opened its doors for the first time in 2006, Cochran was the head boys’ basketball coach. He also serves as a full-time building substitute teacher at the school, which means that he sees a wide variety of students on a daily basis.

“For me it’s not just about being a basketball coach, but it’s about being a role model, a mentor and showing kids how to be respectful,” he said.

Cochran has firsthand knowledge about the potential challenges and pressures of being a student-athlete. He played basketball at Southwestern Community College in Chula Vista, Cal., before attending Cleveland State.

“We talk about it all the time,” James said. “Keith was a high school and collegiate athlete, so I am able to also get that perspective. And there are times he puts his coaching hat on for me, and it works.”

When asked about some of his favorite memories of the last 15 years at Rustin, Cochran didn’t mention all of the Ches-Mont titles – and there have been many.

“There are instances where a kid comes back and says, ‘I wish I would have listened to you,’” he said. “For me, one of my biggest moments is the alumni league in the summer, or during the holidays when we have open gym and we have 150 former players, including kids from (West Chester) Henderson or (West Chester) East.

“That’s what it is all about. A lot of people get caught up in the wins and losses, but it’s about relationships, and seeing these kids grow and graduate from college and have families and jobs. That’s winning to me.”

GETTING A FOOT IN THE DOOR

This power couple were born and raised in Cleveland, Ohio. Cochran first met James when they were teenagers, but their courtship didn’t commence until many years later.

“I was great friends with her brothers,” Cochran explained.

“Here is what happened,” James laughed, “when he came around with my brothers, I paid him absolutely no attention.”

James attended Kent State as an undergrad and had earned her PHD by age 28.

“I was not a college athlete, so there are things I’ve learned. But I can definitely tell them what it’s like to be a student,” she pointed out. “I know a little something about persistence and determination.”

In the mid-1990s, she took a job at WCU as a faculty member in Department of Health. In those early days as a bachelorette, James would return to Cleveland quite frequently during holidays to be with family.

“Every time I would go home, Keith would come over,” she said. “And after being in West Chester by myself for five years, Keith started to look very cute to me. In a couple weeks, we will celebrate out 19th wedding anniversary.”

They now live in West Goshen. And it should surprise no one that their kids, K.J. (Keith junior), 13, and Kayla, 11, are student-athletes.

At West Chester for 26 years and counting, James created a leadership class for student-athletes, and that’s how she: “got my foot in the door with athletics.”

More than a decade ago, colleague Kellianne Milliner unveiled the Student Athlete Support Services program at WCU, which provides academic support, leadership training and personal development programming. When Milliner was elevated to Associate Athletic Director at WCU about eight years ago, James took over the program and ran with it.

“Not everybody gets a chance to do something they love,” Cochran said. “It’s an honor. Neither Tammy nor I take it lightly.”

A few years ago, James was having lunch with Terry Beattie, who is the director of athletics at West Chester. He asked: “what is your dream job?

“I told him that I am trained as a health educator. But I also have a love of sports,” James recalled. “When I went to Kent State, my dream was to be a sportscaster. That did not happen, so my new dream was to combine my passion for sports with my love of teaching. And that’s what this job is.”

Not long after taking over as WCU’s Coordinator of Academic Support Services, James started looking for ways to get student-athletes more support than just providing the obligatory study hall.

“Kids just hate going to study hall, particularly kids who aren’t good at studying,” Zwaan said. “They don’t know how to use their time correctly or what to study.”

With that in mind, James unveiled the Athletic Mentoring Program at WCU, to help first-year and at-risk student-athletes who have been identified by their coaches as perhaps needing some addition academic support. They are assigned a graduate athletic mentor who is either in the sports administration program, school counseling or WCU’s higher education student personnel program.

“These are young people that want to work in higher education, particularly on the student affairs side,” she explained. “Some are former collegiate athletes because they understand that balance between academics and athletics.”

The program has three major aspects. The first two – which provides tutors and study hall – are commonplace. The third, however, is not. The student and mentor meet twice a week for one-on-one talks which can cover study and time-management skills, or involve connecting them with other services across campus, like financial aid and mental health.

“We help them find or access those services,” James said. “Once the student-athlete develops a trust with the athletic mentor, they bring all kinds of important things to us that are barriers to becoming a better student.”

As part of the program, the graduate mentors provide a written academic report to each coach at the end of every week. The Academic Mentoring Program has been so wildly successful, the NCAA has asked James to provide talks about the program at the national level at numerous conferences and conventions. They asked James in April to put together details of the program for its Division II blog.

“Bringing in the personal aspect are so important to kids that are at-risk,” Zwaan said.

“Our student-athletes know that she was the difference in them graduating. She is willing to help them deal with all of that stuff, and that’s why she has taken the program to another level.”

A GAME CHANGER FOR STUDENTS

James is passionate when it comes to her job and her mission to help student-athletes navigate their way to a diploma. And even though the program is reaching and helping an impressive number, there are always going to be student-athletes that fall through the cracks.

“I have called Bill (Zwaan) many times where he has had to talk me off the ledge figuratively, to say it is OK,” James said. “I do take it personally because I want these young people to be successful, especially when I know how hard some of them have fought to be in college.

“Some are faced with so many challenges, and they are being pulled in so many different directions. There are some we lose, and that is tough for me.”

Zwaan confirms that James simply “doesn’t want to lose anybody.” But even if it happens, she routinely works tirelessly to help get them back, if possible.

“I’m invested in student success,” she said. “I always have been.

“But there are some that leave and have later reached back out. I just got a call the other day from a former athlete who’s been gone for five years. He said, ‘Dr. James, I need to come back and finish what I started.’”

According to James, the program’s success is due, in large part, because WCU’s Athletic Department is fully on board.

“The key to our successes is the collaboration and support with the head coaches,” she said. “That’s what makes it work.

“It is very rewarding. Especially in this technological age, what we are finding is that there is a desire for human connection and interaction. It’s more important than ever before. Because most of these students were raised on technology, they are not as confident in going to ask for help.

“So for them to have someone they can talk to every week and hold them accountable, answer questions, and navigate our institution, it is a game-changer for many of our students.”