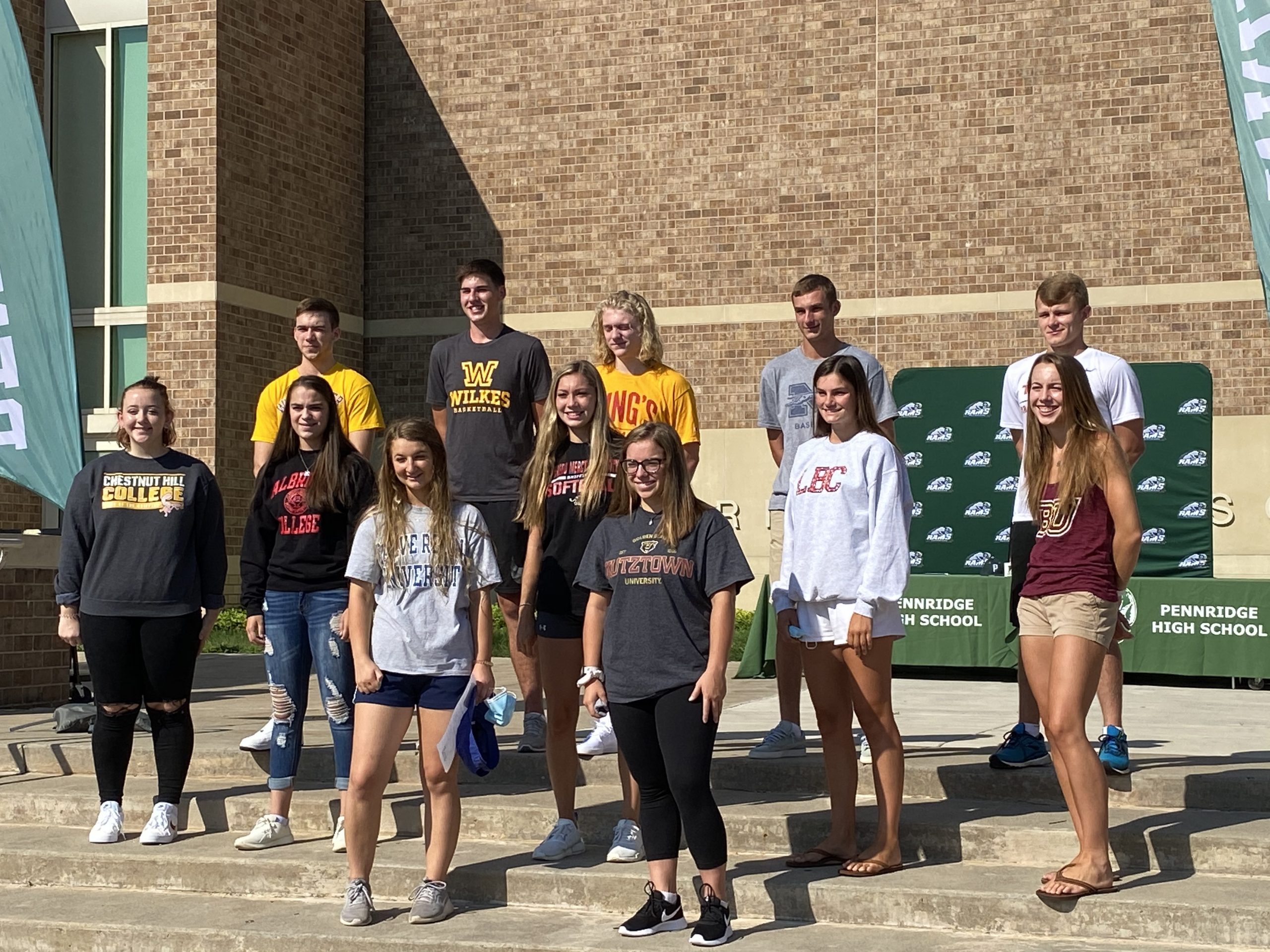 EAST ROCKHILL >> Just like Reese Witherspoon’s iconic character in Legally Blonde, Shaylin Banks knew what college was the right fit for her.

“I’m very good with smaller groups and it was between Chestnut Hill and Millersville – Millersville was just way too big, had a panic attack the first time I was on campus,” Banks said. “Then I went to Chestnut Hill and I this is going to sound weird – I felt like Elle Woods at Harvard. But it was a very lightbulb moment.”

Chestnut Hill College was the perfect spot for Banks and the Pennridge girls lacrosse goaltender is continuing a family tradition in the sport after committing to the Division II Griffins.

“I’m from a really big lacrosse family,” she said. “My uncle, my dad, everybody went to college for lacrosse,” Banks said. “And it wasn’t that I was pressured into it, like I want to continue that legacy. And my summer coach is the goalie coach at Chestnut Hill so I was like, ‘Why not just stay with her?’” Monday morning outside the high school, Banks was among several Pennridge student-athletes honored for their college commitments, the school celebrating their decisions being unable to do so in the spring due to the COVID-19 pandemic that closed schools and cancelled sports seasons.

“It definitely helps with the closure because we didn’t get that in the spring,” Wiss Chiappetta said.

“The location is what caught my eye, said Chiappetta of Salve Regina, a Division III school in Newport, Rhode Island said. “But also the coach – she’s just awesome, I love her.”

As juniors, Moscariello and Iadonisi earned All-SOL Continental Conference honors – Moscariello a first-team selection at outfield, Iadonisi an honorable mention at third base – but there was no senior year for the three as COVID-19 halted the softball preseason in March with the season officially cancelled in April.

“It was definitely really hard cause it’s something you look forward to for four years and it’s just ruined,” Chiappetta said. “But we did get the little tournament in so that was good – it was kind of a closure.” In his Letter of Intent questionnaire, Bobby Brashear put down his favorite movie as Iron Man. Tony Stark is a fictional alumnus of Massachusetts Institute of Technology so for Brashear MIT seems like a good fit to continue his track and field career.

“It kind of gets portrayed as a very Brainiac area but all the kids were very nice,” said Brashear of the Cambridge, Massachusetts school. “I felt like I fit it really well and I felt like I would be a great place for me.”

Brashear said he’ll most likely run the 400 meters – he took first in the event at the 2019 SOL Continental Championships – but might also do so 200 and 800 meters while academically he is looking to major in mechanical engineering.

“I want to do probably something with engineering,” Brashear said. “I’m not sure which branch – probably mechanical and then anyway I can work in computer science I’d love to because they’re pretty flexible with what you can do, you can kind of combine stuff and find something that fits you.” Also for Rams boys track’s Jack Wasserman and Ethan Saville both committed to West Chester University. At the 2019 SOL Continental Champs, Wasserman was fourth in both the 100 and 200 meters while Saville took fourth in the 3200.

Pennridge girls track has a pair set on attending Bloomsburg with Melissa Sicinski and Alexia Kirk both set to run for the PSAC Huskies. Sicinski wants to major in Middle Level Education with Kirk aiming to majoring in Education.

Shannon Griffin, an honorable mention All-SOL Continental pick in field hockey in 2019, committed to play the sport at Albright College.

Paul Croyle is continuing his baseball career at Moravian College and is looking to major in graphic design and marketing. Croyle earned all-conference honorable mention at shortstop as a junior. Fisher was an all-conference first team pick last season as the Rams won the SOL Continental outright and advanced to the second round of the PIAA-6A tournament. Loughery earned second-team all-conference as Pennridge qualified for the District 1 tournament.

Alex Lelii committed to play football at King’s College and is set to study business and marketing at the Division III Wilkes-Barre school.