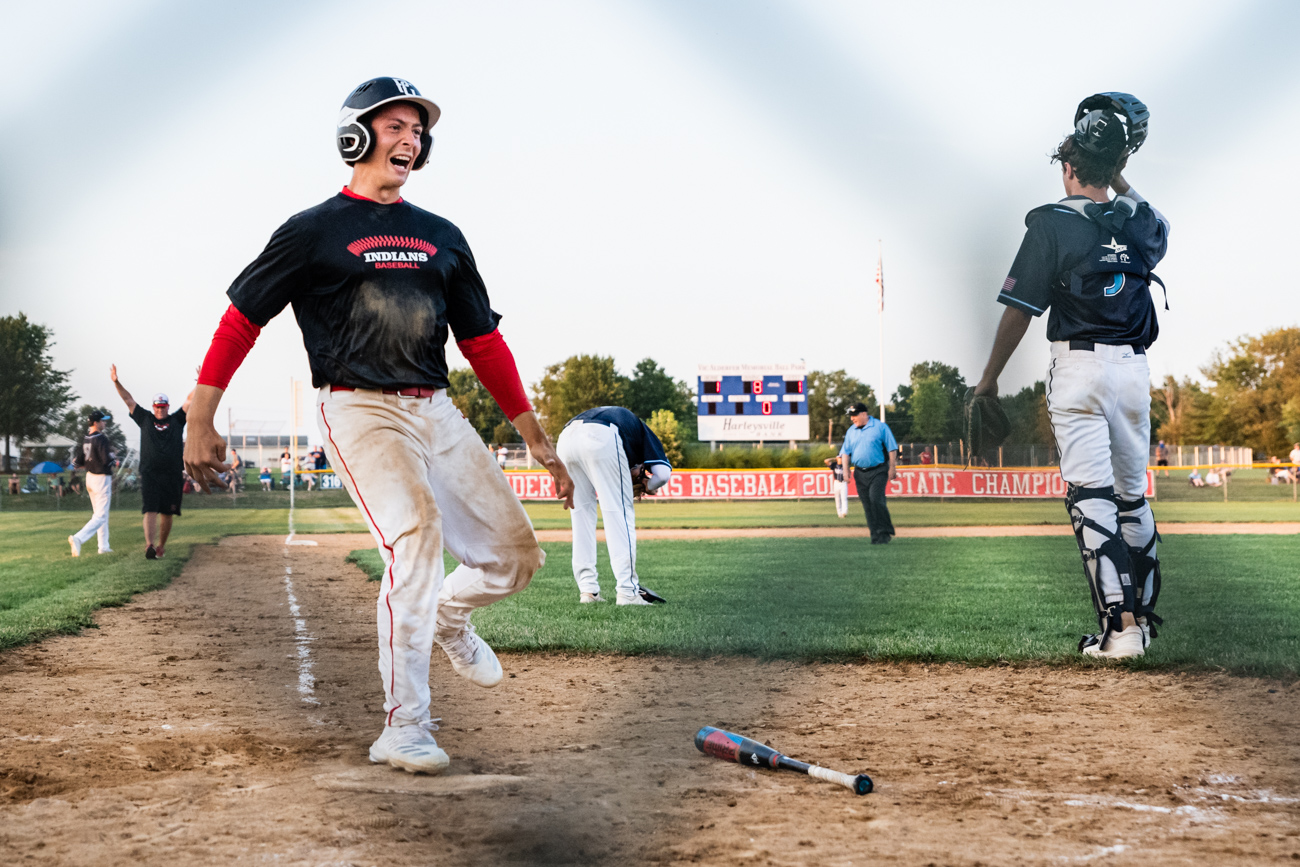 LOWER SALFORD >> Conlan Wall’s only option was racing 90 feet to first base as fast as he could.

“I knew I couldn’t strike out, so when I had two strikes I had to put it in play,” he said. “I saw I hit it kind of hard, pretty hard to the second basemen so I was like ‘Oh crap. I have to beat this out.’”

With the bases loaded and one out in the bottom of the seventh, Wall looked to have grounded into a game-ending double play. But while Knights Baseball got the force out at second, the Saint Joseph’s commit got down the line just quick enough to beat the throw, allowing Indians Baseball to pull even at a run apiece.

“It was a bang-bang play but I definitely beat it out,” Wall said.

Indians recorded just a single hit – Eliot Majka’s single to lead off the bottom of the seventh – but scrapped their way to a run each in that inning then the eighth courtesy a collection of bunts, errors and walks.

“Today we were lacking hits but we took advantage of the mistakes they had but no one has the chance to practice any of this stuff,” Indians coach Mike Childs said. “It just went in our favor and we’re happy about it. And for me of all things to bunt – I hate bunting but I understand that we have to do it.”

Starting pitcher Kolby Barrow put together a dominant effort  on the mound for Knights – its roster consisting of players from North Penn – the right-hander heading to Bloomsburg striking out seven in four perfect innings.

“I was loose, I was ready to go,” Barrow said. “Like I said last Friday I was ready to come out with a vengeance and win the game. I gave it all I had, left it out on the field.”

Knights took a quick 1-0 lead on RJ Agriss’ sacrifice fly in the top of the first but could not add to the advantage – stranding two baserunners in each of the first three innings then leaving another two on in the fifth.

“And that’s the stuff that was talked to our younger guys about. That’s not our message to the seniors tonight, that message is much bigger. But to the underclassmen that the stuff that we make sure that they know to carry into the offseason.”

For Indians, it was the second victory over Knights – they won 3-0 last Friday – in posting a perfect 4-0 mark in the Bux-Mont Baseball Classic, a six-team tournament created to give local squads a chance to play after the COVID-19 pandemic cancelled the spring sports season.

“It was a great week-and-a-half,” Manero said. “There’s just a lot of bad stuff going on right now around the world and to be able to get out there with these guys for a week-and-a-half is just awesome. I think anybody that knows how great this is would have given anything to do what we did this week.”

Majka stopped Knights’ no-hit bit with his leadoff single to start the bottom of the seventh then went to third after an error on David Overpeck’s sacrifice bunt.

On the next at-bat, Knights third baseman Chris McLean made a diving snag on Matt Benner’s grounder down the line. Majka broke for home, stopped, then continued to the plate but McLean’s throw while still on the ground was well in time for the tag out.

An error on Zach Crouthamel’s infield dribble loaded the bases with one out for Wall. The Indians leadoff man – who was 0-of-3 in the three prior at-bats – grounded to second but got to first just in time to deny Knights’ a game-clinching 4-6-3 double play and allow Overpeck to score the tying run.

“He had to beat it out and just knowing – thank God – we had him running the bases with speed,” said Childs of Wall.

Cole Egner struck out the next batter to send the game to extra innings. In the top of the eighth, Alex Kee drew a two-out walk but Jacob Horton followed by getting a strikeout looking.

#BASEBALL: We’re going extras. Conlan Wall beats out a double play with 1 out & the bases loaded to score a run as Indians pull level with Knights 1-1 B7. @NPKnights @SoudyBaseball pic.twitter.com/szFiHJIVno

Frye and Horton began the bottom of the eighth with consecutive walks with an error after Canfield placed a bunt down the third-base line bring home Frye from second and setting off a jubilant Indians celebration.

Horton pitched the last three innings to earn the win for Indians. The right-hander did not allow a hit, struck out five and walked one. Egner took the loss, the Knights lefty giving up two runs – both unearned – on one hit, struck out one and walk two in an inning-plus.

Barrow, meanwhile, was stellar in retiring all 12 Indians batters he faced, with two strikeouts each in the second, third and fourth frames.

Knights’ Evin Sullivan started the game with a double to center while an Erik Jesberger walk and a Steven Corrado single loaded the bases with no outs. Agriss’ one-out sac fly plated Sullivan to give Knights the early edge but a ground out to first the next at-bat kept its lead at 1-0.

Indians finally got a baserunner in the bottom of the fifth when Horton led off with a walk. Two more walks had the bases loaded with two outs but Christian Stevens got out of the jam with a strikeout.