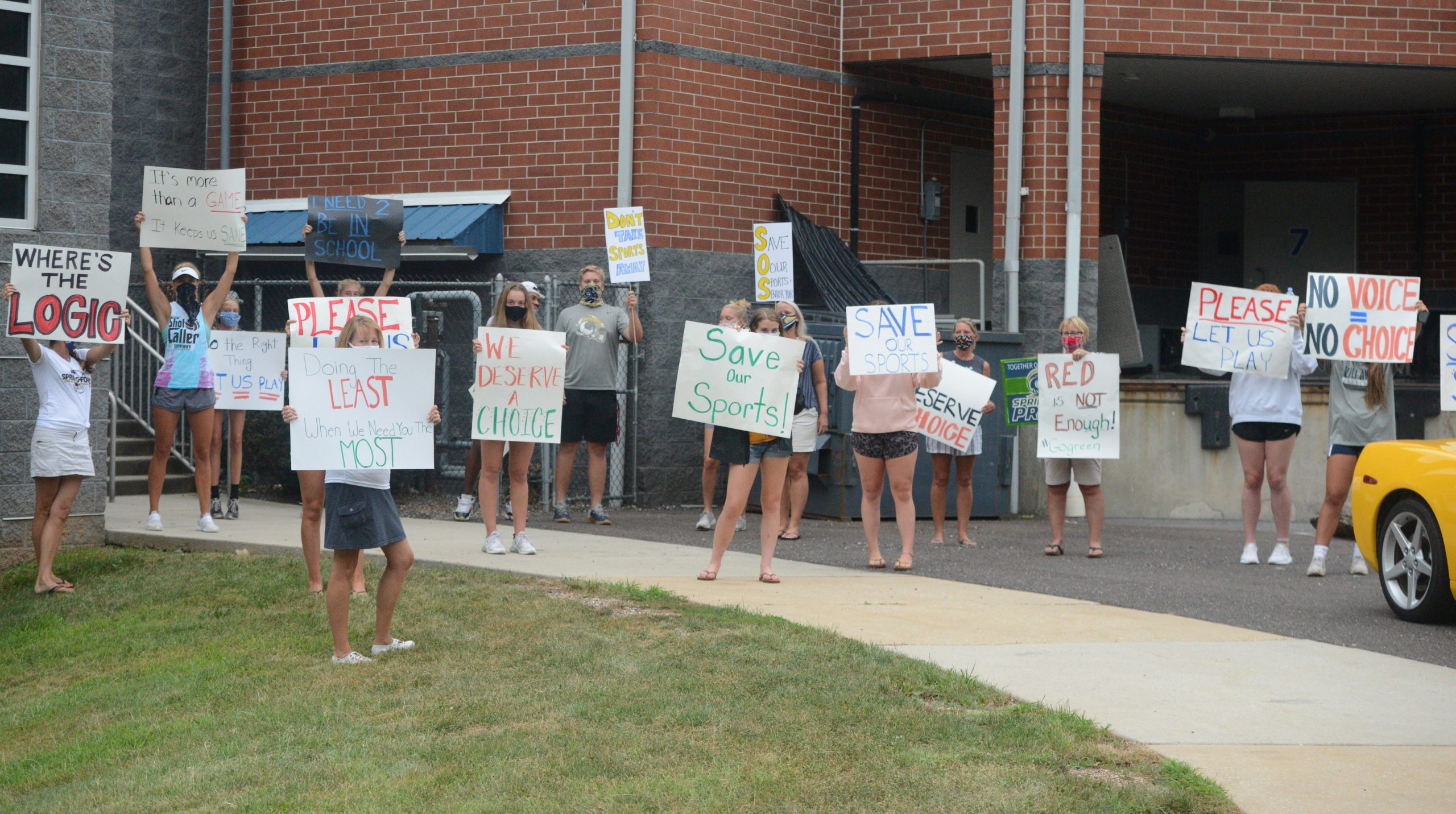 About 20 Spring-Ford student-athletes and parents gathered outside the high school on Monday night.

Wearing protective masks and holding signs with messages like ‘Save our Sports’ and ‘Let us play,’ the group let those attending a district school board meeting know that they wanted to have a sports season this fall.

“Our main thing is we already have our academic year taken away from us. We want to have our sports.,” Spring-Ford senior soccer player Hope Flanegin said. “We want a balance in our lives, and if we have everything taken away really quickly and all of a sudden, we don’t know what we’re going to do. … At least if we have sports something will be normal.”

The Spring-Ford Area School Board announced last week that the district would start the first quarter of the 2020-21 school year fully online. At Monday’s meeting, the board approved extracurricular contracts, including new head girls soccer coach Tim Raub.

No official decisions were made on the status of the high school sports season, meaning Spring-Ford sports have not been cancelled for now.

“It’s kind of just stressful because we’ve worked so hard to get to this point,” Rams’ senior football player Nasir Cooke said. “I feel like they should consider it a lot because of how hard we’ve worked and stuff like that. … For some people this is the last time they’ll pick up a ball.”

“It’s your senior season, it speaks for itself,” fellow senior football player Kyle Kennedy said. “It’s everything you’ve been working for the past three, four years you’ve been playing.”

The conclusions of the PIAA winter sports championship and the entire spring sports seasons were cancelled due to safety concerns caused by the coronavirus earlier this year. Last week, the PIAA Board of Directors voted 29-3 in favor of ‘Return to Competition’ guidelines, moving forward with plans to play the fall sports season.

Entering the upcoming school year other states have decided to cancel high school sports for the fall and even winter, including the Maryland Public Secondary Schools Athletic Association, which announced its decision Monday.

Despite the PIAA announcing its plans to move forward with a fall sports season, fellow Pioneer Athletic Conference school Norristown announced Thursday that it would be opting out of fall sports as it carries out virtual learning.

Governor Tom Wolf said Monday that while he encourages decisions on in-person schooling and athletics be made on a case-by-case basis by each school district, it is hard to justify playing athletic contests if a school is teaching its students fully virtually.

“The kids set it up, and they want a voice,” Spring-Ford parent Kelley Olsen said. “No one’s listening. They want to be in school and they definitely want to play sports. It’s too dangerous not to be in school. That’s what the CDC says now. They decided they were going to come here and try to fight for their sports and what’s important to them.”

“Norristown already has no sports,” she added. “We don’t want that tragedy to happen to us.”

Many athletes have played on some type of AAU or travel team this summer, but those organizations usually take a pause when high school sports start back up in the fall.

In preparation for their season, Kennedy and Cooke said the football team started voluntary workouts about four or five weeks ago, as approved by the PIAA.

The girls soccer team has been unable to officially meet with Raub, but the seniors have held practices and kept in contact as they wait the official fate of their season.

“We’ve talked about what the different possibilities are, so we’re ready for anything but we’re hoping for the best,” Flanegin said.