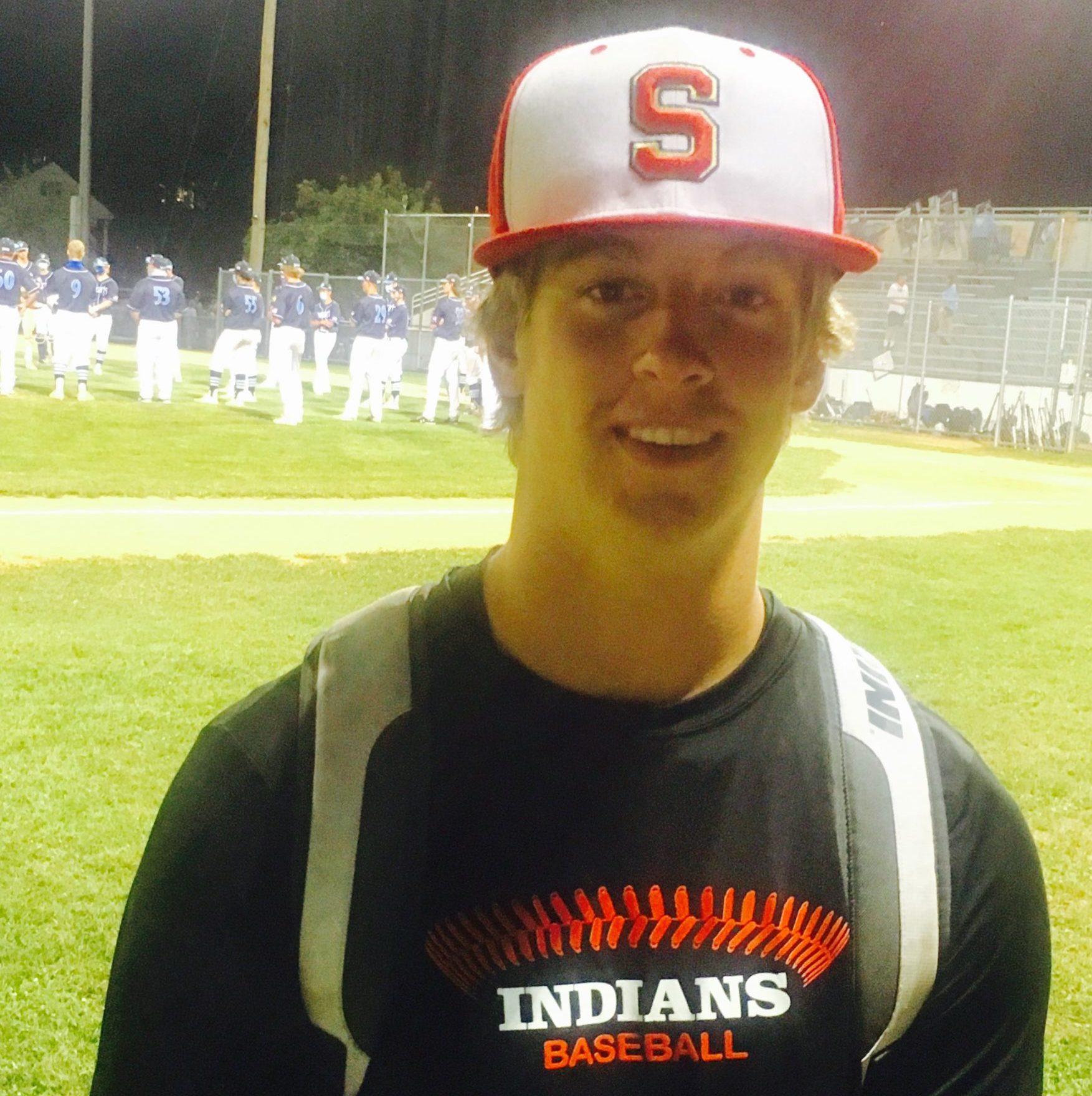 Erik Ritchie pitched three shutout innings for the Indians in a win over the Knights on in the Class of 2020 Bux-Mont Baseball Classic on Friday, July 31, 2020. (Kev Hunter/MediaNews Group)

LANSDALE >> Under the lights, Indian pitching was lights out.

Erik Ritchie, Jacob Horton and Brian Reiner combined for a 3-0 shutout on Friday against the rival Knights, sending the Indians to Wednesday’s Championship Game of the Class of 2020 Bux-Mont Baseball Classic

“It would have been nice,” a smiling Ritchie said of the Indian pitching staff, referring to the spring season that unfortunately was wiped out due to the COVID-19 pandemic.

“I think we’re playing (the Knights) again,” Ritchie said of the title tilt.

It will be a rematch Wednesday at a site and time to be determined with the Knights qualifying for the title game over Perkasie Baseball Club by the runs against tiebreaker — Knights gave up eight runs while Perkasie allowed 15.

It was a postseason-type atmosphere Friday night at Memorial Park. Fire trucks rolled in and unfurled a giant American flag for the national anthem while fans of both squads packed the stands and spilled out along the first- and third-base lines as well as the outfield.

It was an atmosphere worthy of the two teams in play.

“(Knights coach) Kevin (Manero) took the bull by the horns and set up the whole thing for all of us, made it easy on all of us, and doing it for our guys too,” Indians coach Mike Childs said. “Our guys were appreciative to be able to get out here.

“You always have the North Penn-Souderton rivalry, so that’s always out there. You both wanna beat each other and that’s always a good thing too.”

EARLY PUSH >> The Indians (3-0) dented the scoreboard in the second inning.

Matt Benner’s single to center scored a run and Isaac Frye drew a bases-loaded walk to extend the lead to 2-0 against Knights starter Cole Egner.

The Knights (2-1) threatened in the third.

Erik Jesberger and Chris McLean each drew walks to give the Knights runners at first and second with no outs.

Ritchie struck out Colby Chan then got Kolby Barrow looking at a called third strike.

Getting out of the jam, Ritchie struck out Alex Kee to preserve the Indians’ 2-0 lead.

“I was trying to throw the curveball for a strike as often as I could,” said Ritchie, who struck out five, walked three and allowed just one hit in his three innings of work. “And I was definitely not throwing a strike when it was 0-2. I kept it in the dirt.”

The visitors increased their lead in the fifth.

Canfield advanced to third on a wild pitch, then raced home on a throwing error to widen the gap to 3-0.

Kolby Barrow then struck out three in a row to prevent any further damage.

HORTON HEARS A K >> Jacob Horton came on in the fourth for the Indians, and after surrendering a leadoff single to Evin Sullivan, retired three straight.

The Knights made some noise in the fifth, putting runners at first and second, but Horton struck out two in a row to end the threat.

He struck out three, and second baseman David Overpeck’s diving catch in shallow center helped finish things off for the Indians.

“Ritchie and Horton were supposed to be two of our top pitchers and Reiner was right there,” Childs said. “There were a lot of guys that contributed that we knew were players. Some of the underclassmen are showing up and showing us some stuff too.”