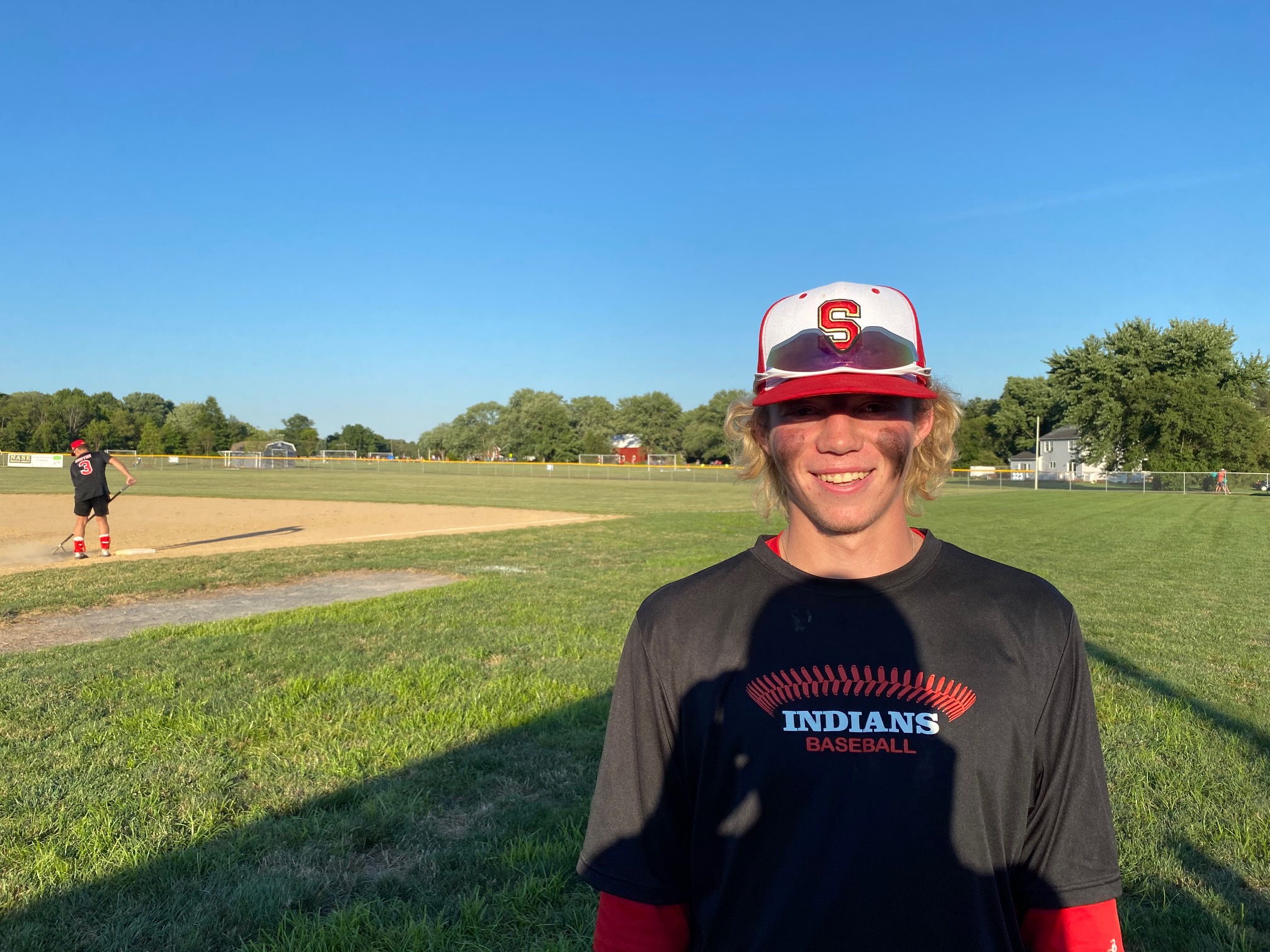 “I didn’t think it was out,” he said. “I was sprinting like I was about to get like a double or triple. But it happened to go out.”

Sailing out to left field, the ball eventually fell over the fence adorned with Souderton’s 2019 PIAA championship banner, the two-run homer part of Reiner’s stellar performance on a Senior Night long overdue Wednesday in the Class of 2020 Bux-Mont Baseball Classic.

Reiner was a triple short of the cycle, finishing 3-for-3 at the plate while also pitching three dominant innings as a trio of Indians Baseball pitchers combined to toss a no-hitter in a 11-0 five-inning victory over Casey’s Place Hooligans at Vic Alderfer Memorial Ball Park.

“I’ve never been a home run hitter, so everything I’m looking for is just to piece up line drives,” said Reiner, who will play at Penn State Harrisburg. “I just got a hold of that one – pretty well, I guess.

Reiner’s blast was part of a six-run third that gave Indians a 7-0 lead over the Hooligans – composed of players for Quakertown High – with the home side tacking on four more in the fourth to enact the 10-run mercy rule after five.

“We’re starting to bring it back now, you know get back into the swing of things,” said Indians’ Eliot Majka, who is heading to the University of Tennessee. “It takes a couple games. We got a big game Friday against North Penn our rivals but today was a good game to get our hits back and rolling.”

Conlan Wall and Reiner – hitting first and second, respectively, in the Indians lineup – posted five of their team’s nine hits as Indians improved to 2-0 in the tournament going into Friday’s 7 p.m. matchup against Knights Baseball (2-0) at Lansdale Memorial Park.

“Between him and Wall, they took this whole experience by the horns and said you guys let’s roll with it,” Indians coach Mike Childs said. “And that’s what everybody’s doing.”

Reiner pitched the first three innings, the right-hander striking out seven, including the last five batters he faced.

“I’m was sticking to my fastball they seemed like they were struggled to keep up on it so I was striking with mainly the same pitch, like in the top of the lineup I’d stick with my slider a lot,” Reiner said. “Yeah, I just felt really good, I was on today. I wasn’t throwing any balls.”

Jacob Horton and Joseph Fresta both threw an inning to complete the collective no-hitter. Only a one-out error in the first and a two-out walk in the fifth prevented a perfect outing.

Prior to the game, Souderton’s seniors were recognized, the Classic giving Big Red graduates a few final chances to play at their home park after the COVID-19 pandemic cancelled their season in the spring.

“My thing for them, I wanted them to play on the field one more time with the (PIAA champ) banner and seeing the banner and defending the (state title) – I mean it’s not necessarily a defense but having the opportunity,” Childs said.

David Overpeck made it 1-0 Indians in the second as his sacrifice fly to left center scored Ryan Canfield, who began the bottom of the inning with a single.

Wall opened the Indians’ half of the third with a single before Reiner – who dropped a double into right in the first – made it 3-0 by connecting on his two-run home run to left.

“You just got to go up and do what you’ve always done,” Reiner said. “You’re not going to chance it up what you’re doing to do at the plate just cause you haven’t got the same reps. It’s going to feel different cause it’s newer but you got to just repeat same thing every time.”

Isaac Frye extended the margin to 5-0 with his two-RBI double to left center. Xander Giordanni’s two-RBI single had Indians up seven.

Wall – who will play at Saint Joseph’s – and Reiner began the bottom of the fourth with back-to-back singles. Both scored when Horton reached due to an error.