Mercury-Area football teams back on field for preseason workouts 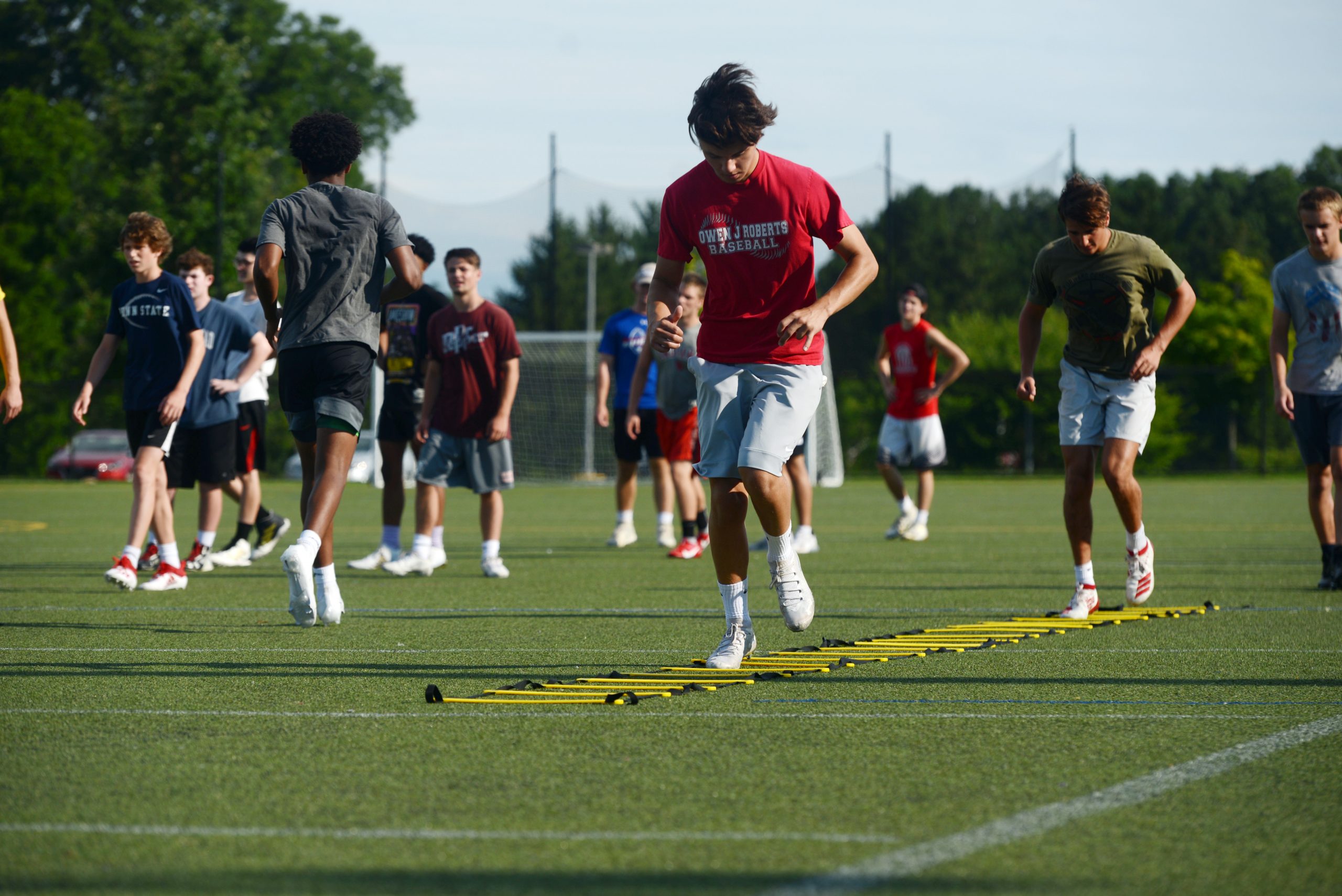 It’s a step in the direction of the “old normal.”

Time will tell if it leads closer to the “old,” or if there’s an about-face toward whatever “new normal” takes its place … or even, worst-case scenario, “zero normal.” But for the time being, high-school football programs in Pennsylvania are back in business.

Around the region, they’re more than happy to be doing so.

At schools in the Pottstown/Pottsgrove and surrounding communities, athletes are working out in advance of the high-school heat-acclimatization week kicking off Aug. 10. On every practice field, the workouts are being embraced as a constructive activity, a pastime in a summer season when pastimes have been scarce in the wake of the COVID-19 pandemic, and most importantly, an opportunity to reconnect with teammates after months of forced distancing.

“They’re excited to be back,” head coach T.J. Miller said of his Boyertown players. “They have a good work ethic. The kids are in good shape; they’re bonding together. They want to interact and have fun.”

Teams like Boyertown, Pottstown and Upper Perkiomen got started soon after the Independence Day holiday weekend ran its course. Pottsgrove, by comparison, got going just this week.

Starting dates aside, the focus on the 2020 football season and the parameters it may produce are the common threads in the teams’ early workouts.

“The players simply want to play,” Kolka said. “They are excited about the potential of a solid football team, and many of them have been waiting for their senior year.”

Following the approval of its restart program July 9, Pottstown embarked on voluntary four-hour morning workouts running Monday through Thursday. Now in its third week of workouts, the team numbers are running in excess of 50 … a significant upswing from the 38 on its 2019 roster.

The team has the players, broken down into four groups, focusing on speed training and skills in the early going. Cones are set up to mark places on the field athletes stand to ensure proper distancing.

Like everywhere else, the Trojan gridders are working to catch up from the months of shutdown brought on by the coronavirus.

“It’s a shame,” Delaney said. “The kids were doing well in the off-season. They keep going though. They’ve been very eager.”

The Pottsgrove gridiron squad started its workouts Wednesday (July 22). The first two weeks of the voluntary sessions will focus on players’ strength and conditioning.

“During the first week, we will have two voluntary strength and conditioning workouts,” Falcons head coach Bill Hawthorne noted. “ We plan to add an additional day of voluntary workouts per-week up until the start of heat acclimatization. However, we will modify and adjust, based on a number of factors, to ensure the safety and well being of our players.”

“During our workouts, coaches will be able to instruct in-person,” he added. “However, we will strictly follow the guidelines set in place by our school board, administration, athletic director and athletic trainer.”

In preparation for the workouts, the players held meetings related to positions and the phases of the game. Taking stock of players’ overall conditioning was a key piece of the first week of workouts.

“The players were provided with weekly strength and conditioning workouts since the beginning of the COVID-19 pandemic, so it will be very apparent who did the necessary work to be ready for the 2020 football season,” Hawthorne said.

The Falcons have a multi-faceted workout plan leading up to the Aug. 10 heat acclimatization week.

“We will continue to focus on the strength and conditioning of our young men,” Hawthorne said, “as well as emphasizing the fundamentals, techniques, and ultimately the skills that are necessary and specific to each position.”

Owen J. Roberts has been working four days a week, primarily on weight lifting and conditioning. Kolka has staggered the workouts to insure there are no more than 25 players in a general vicinity at one time.

“It makes the day really long for me,” he said, “but it is the safest option for the players.”

Toward that end, Kolka is involved with making sure the players are staying safe during the workouts,

“I directly oversee every workout that we do,” he said. “I feel I have to do this to ensure proper distancing, and face mask protocols. All of our stuff is face to face.”

The OJR staff has found the conditioning of its players at varying levels.

“It’s ranged to obviously working out every day and obviously not,” Kolka said. “This would also go hand in hand with what they had at home to use. Many of them do not have weight room equipment, which I completely understand.”

The Wildcat coaching staff is taking a similar approach to the coming weeks’ workouts as other teams, Kolka noted.

“As we get closer to the season, we will begin to install more of the offense and defense and use bags and shields for contact drills,” he said.

Upper Perkiomen started workouts three weeks ago. Head coach Tom Hontz noted the players are not allowed to use footballs or shields and must maintain six-foot social distancing.

“Mostly we are just doing agilities and conditioning work with some ‘mental skills’ as well,” Hontz said.

“We’ve had roughly 30 kids attend, which means we have to divide them and go in two separate sessions with separate coaches as we can have no more than 25 people at any one session.”

A sanitizing station is set up outside of the Methacton football team’s practice field Monday. (Owen McCue – MediaNews Group)

Hontz expressed some concern about how the process is going to change over the next few weeks.

“It seems like it is going to be quite a jump if we go from the current protocols to heat acclimatization on August 10,” he said, “but we shall wait and see what guidance we get from the PIAA.”

At Methacton, players are involved in outdoor workouts four days a week, incorporating body weight and medicine ball work alongside speed and agility programs. The workouts are overseen by coaches and held in conjuction with numerous Zoom meetings.

“We were very happy with the conditioning level our players returned in,” head coach Dave Lotier said. “While not as bulky as they would have been with a full off-season in the weight room, I believe our conditioning and muscle endurance is at a level to be successful come August.

“Our guys have had a great attitude,” he added. “It’s obvious they realize the opportunity we have, after many losing their spring seasons, and they are taking advantage of every moment.”

The plan for the last few weeks of summer workouts leading into camp is a greater focus on speed and functional movements.

“When they first returned, we felt it was important to get their bodies back into ‘football shape’ before really pushing the limits,” Lotier said. “Now it is time to get ready to play.”

Perkiomen Valley will first return to the practice field for the heat acclimatization week Aug. 10. Head coach Rob Heist has been conducting weekly Zoom meetings with his players to keep in touch since March.

“Players have been participating in a strength and conditioning program individually at home,” he said. “Seems to me that they are all chomping at the bit to get back to in person workouts and football in general.”

Boyertown’s players got on the field July 6, going Monday through Thursday in the mornings since then. The emphasis in the workouts has been on conditioning, with a little bit of technique installed.

“We want them getting in shape and in a routine,” Miller said. “I think the kids want to get out of the house.”

The team also takes part in Zoom meetings, with morning messages telling them they need to be at certain fitness levels.

“Fortunately the way the plan is running up, we have the whole team there,” Miller said. “We divide it into position groups. With two practice fields, we have a lot of space for 25 athletes and under.

“For the most part, they’re spread out and have masks on.”

Along with the physical work their players are doing, Miller and his assistant coaches are getting the athletes to consider the possibility they could face a replay of the shutdown Pennsylvania schools and sports programs faced four months earlier.

“We made a point to let them know every day coming to practice could be their last,” Miller said, “For a majority of the kids, we’re all they’re doing.

“We’re built on optimism and a perspective on life. How you can get shut down. Focusing on right now, and working hard.

“Control the play in front of you: That’s the mindset.”