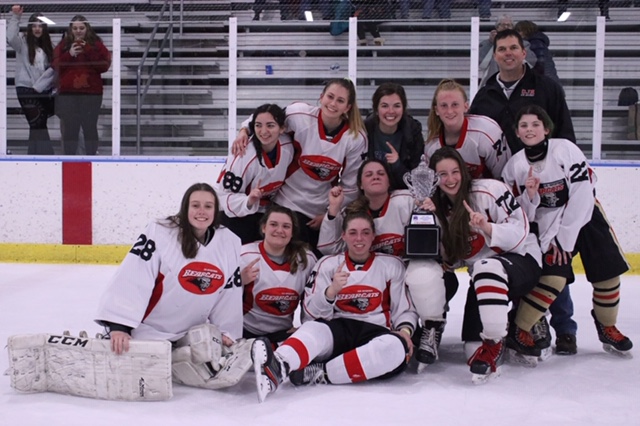 The Owen J. Roberts-Boyertown girls ice hockey team was one of the lucky high school sports teams this winter — and not only because they were able to finish their season.

On Sunday March 8, four days before the sports world shut down due to the COVID-19 pandemic, the Bearcats claimed their second straight Inter-County Scholastic Hockey League National Division championship with a 3-2 victory over Unionville.

After watching many high school athletes see their seasons go unfinished or not begin at all, it’s an accomplishment all the more cherished by the Bearcats players.

“It was a near miss, and I’m very grateful I was able to play in the championship game because it was my senior year and I love my team,” said senior Kate Erb, who has been part of the Bearcats team since she was as an eighth grader in 2015-16. “We have worked so hard for the past five years to get this win. It was really special. It offered closure before I left the team for good and went off for college.”

Heading into 2019-20, expectations for the Bearcats, who feature players from both Owen J. Roberts and Boyertown high schools, were uncertain.

The Bearcats graduated a large group of seniors from a squad that went 15-1-2 and won its first division title in 2018-19. They had just nine players play in 11 or-more games this season, often heading into games with as few as six players.

Though the Bearcats played with a slim roster throughout this season, they were able to top the previous season’s win total with a 17-2 mark.

“It was really crazy,” senior Anna Bochanski said. “I don’t know how anyone else felt, but I didn’t expect to have as good of a season as we did. We lost a lot of really talented players after the end of the previous season, and we only ended up having nine skaters or less most games, which isn’t even two full lines for hockey. We didn’t even have enough subs to fully switch out whenever people were tired.

“I definitely didn’t expect to even be in the championship game, let alone win it. It was really crazy. I think by the time we got there, I was just really determined to play my best and try to win it.”

Junior Ava Rinker led the Bearcats with 85 points this season, scoring 49 goals and tallying 36 assists. Junior Payton Hansen had 23 goals and 15 assists, and Erb followed with 12 goals and 10 assists.

Down a little ways down the list of Bearcats leaders was Bochanski, who scored six goals in 16 games. However one of the them was the team’s most important score of the season.

After Rinker’s two goals were answered by Unionville in the championship game, Bochanski scored what ended up being the eventual game-winner six minutes, 39 seconds into the third period to cap her high school career with a championship clincher.

“It was really crazy to be able to get the game-winning goal, especially against the Unionville goalie (Mattie Robitzer),” Bochanski said. “She’s a goalie I’ve known is one of if not the best goalies in the league over the past three years. I never thought I would have scored on her.”

“It made us all really happy to see her (Bochanski) be the reason we got the championship,” Erb said.

Though the Bearcats will be without seniors Erb, Bochanski, Tori Mitros and Jenna Tayman next season, a strong core is eligible to return, including Rinker, Hansen, Samantha Hughes, Ryley Brown, Graci McGee and Erb’s younger sister Amelia, the team’s goalie.

The goal this offseason has been to find some new players to join, so the team has enough to make a shot at a threepeat for the ICSHL National Division championship in 2020-21.

“I think one of our biggest concerns is getting enough players for next year,” Kate Erb said. “Four people graduated this year, including myself, from a team that consistently only had six players. … We’d like to get some attention out there, bring some girls to the team if we can.”

For Bochanski, who joined the Bearcats as a sophomore three years ago, becoming part of the OJR-Boyertown organization is a decision one won’t regret.

“It’s a really great organization,” Bochanski said. “I felt like an outsider at first when I started because all the girls on the team had been together for a couple years already, but everyone on the team is so welcoming. It’s always been a really good, really tightly bonded team who are very willing to pull in new players and just help everyone out. … They’re going to do their best to help you feel good and help you develop into a stronger player every time you get on the ice.”