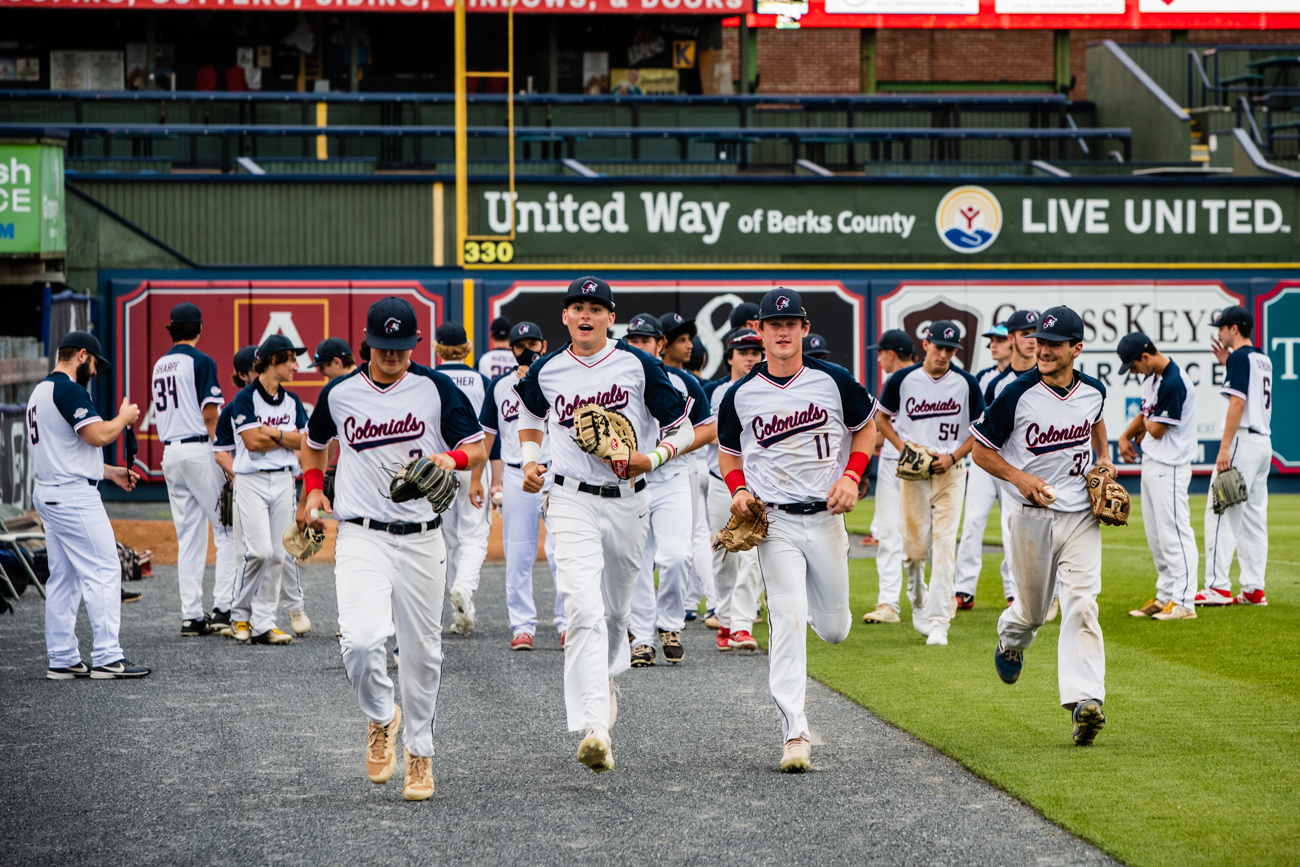 The Colonials ready themselves to start the game against Royersford Tuesday, July 21, 2020 at FirstEnergy Stadium in Reading. (James Beaver/For MediaNews Group)

READING >> The Plymouth Whitemarsh baseball team had high expectations this season. The seniors had their sights set on competing for District 1 and state championships after getting the program to the playoffs in 2018 and having the school’s best season in more than two decades in 2019.

The COVID-19 pandemic took away the upperclassmen’s chance to finish their high school careers on Medlar Field at Lubrano Park on the campus of Penn State University, but they do have the opportunity to play together a few more times at FirstEnergy Stadium, the home of the Reading Fightin Phils.

“This is definitely the nicest field I’ve ever played on,” senior Ben Mascio said. “It’s not the state championship, but it’s better than not playing at all.”

Colonials Baseball Association played its second of three games in the Baseballtown Charities Showcase Tuesday night. They lost, 10-8, to Royersford Complete Game after winning their opener, 9-8, over Mays Sandwich last week. The final game of what Mascio called their “fairwell tour” is Tuesday July 28 at 7:30 p.m.

“There’s a lot of good people out there,” Colonials coach Chris Manero said of this showcase happening. “We owe a ton to the Reading Fightin Phils. We just want to try to find ways for the kids to play baseball.”

Mascio, a 2019 first team All-Suburban One League American Conference selection who will play college ball at West Chester University, had high expectations for his senior season. If Tuesday night’s performance was any indication, he would have been even more dominant than his 8-3 junior year with a 1.62 ERA.

The lefty threw three innings of no-hit ball. He struck out eight batters and hit one. The only batter to put the ball in play flew out to left field. His speeds ranged from the high 50s to low 80s to keep batters off-balance.

“Lot of changeups,” Mascio, who allowed one run in two innings in the Colonials first game at FirstEnergy, said. “(Changing speeds) definitely switches up their eyes and everything. They don’t notice the difference because I’m keeping my arm the same and everything. They think it’s a fastball coming in and it’s just way slower.”

Senior catcher and 2019 first team All-SOL American selection Kevin Reilly has been playing baseball with some of his classmates since little league. In one of their final games together Tuesday, the Class of 2020 performed well.

Emerson Abromavage knocked in the first run of the game with an RBI double. Johnathan Doroba walked in the sixth inning, stole second and scored a run.

Dylan Strunk went 3-for-3 at the plate with two RBIs and a run scored. Strunk, who will play at Delaware Valley University next year, highlighted his night with an RBI triple in the fifth inning.

“(Strunk) has been a backup catcher,” Manero said. “We were transitioning him into an outfielder this year. He’s played really well. Throughout the workouts and the offseason last fall he really showed he’s good out there. He’s hungry. He wants it. He had a little bit of a rough night at the plate last week and we went out and hit the other day and he was really within himself tonight and had a couple big hits.”

Zach Redican made his impact in the field. Redican, who will play at Gwynedd Mercy University next year, helped throw out two runners in the fourth inning. The first was on Royerford’s first hit of the game when the batter tried to extend a double to a triple. From deep right field, Redican hit cutoff man Joe Jaconski, who relayed to get the out at third. To end the inning, Redican threw out a runner who was trying to score from second on a single.

“It was great seeing all the seniors playing well,” Reilly, who tripled in the first inning and will be playing at Binghamton University next year, said, “especially in the last couple games that we’re together.”