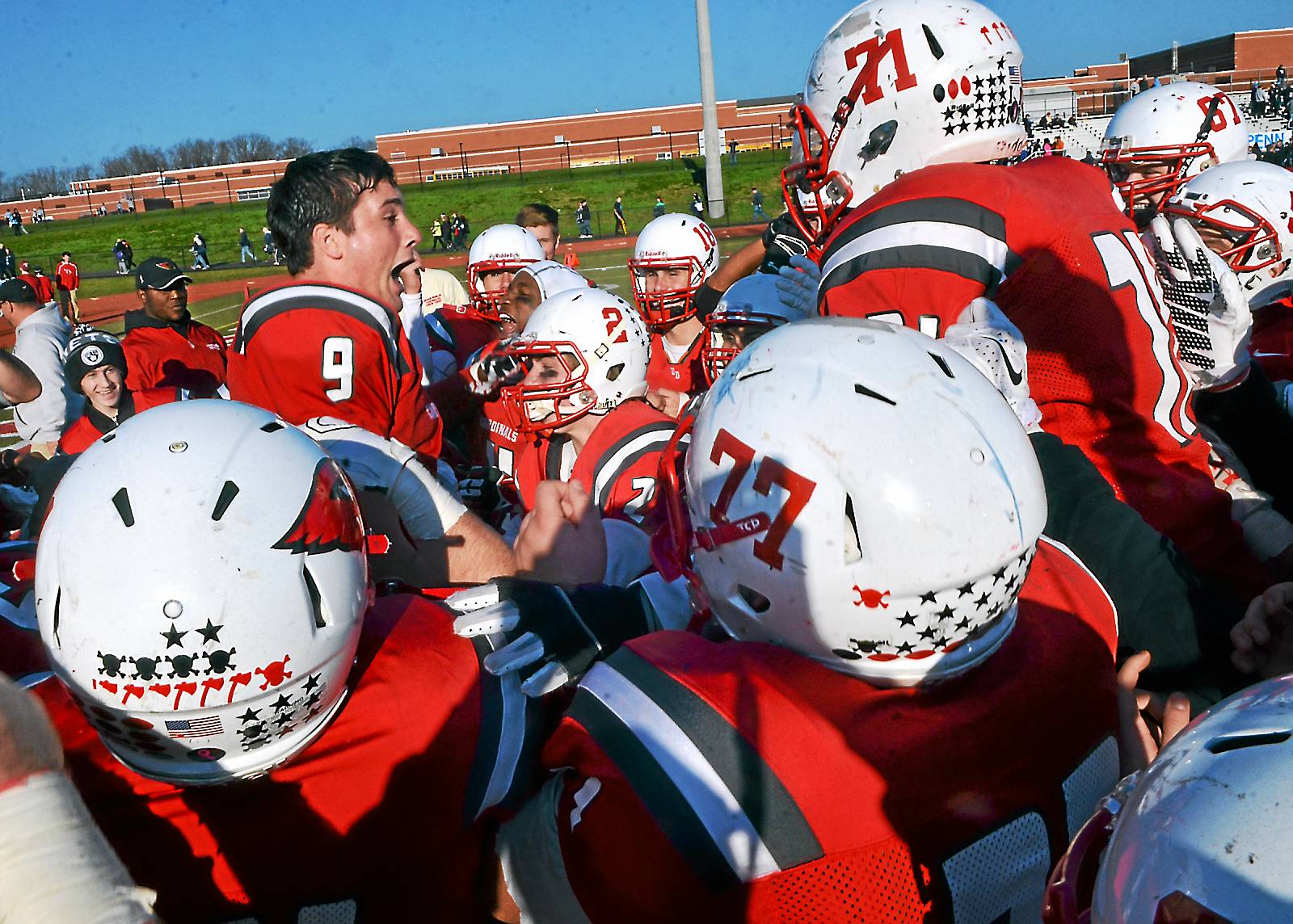 The 2015 Upper Dublin football team was the best in program history. The Cardinals, who were voted the Reporter/Times Herald/Montgomery Media Football Team of the Decade last week, went 14-1 — winning the Suburban One League American Conference and the District 1-4A championship en route to a PIAA-4A state semifinal appearance.

The Cardinals built up to 2015 over the first half of the decade.

In 2010, head coach Bret Stover led his team to a 7-3 season, including a 5-1 mark in the SOL American to share the conference championship with Cheltenham. In the first round of the District 1 playoffs, they lost to Neshaminy, 41-13.

The Cardinals finished 7-3 again in 2011 with a 5-1 conference record, this time a game behind 6-0 Plymouth Whitemarsh. Their district playoff run ended in the first round with a 34-7 loss to Council Rock South.

Upper Dublin quarterback Ryan Stover (16) shakes off North Penn defenders looking for a receiver as he scrambles during the first half of the District 1-4A final at Souderton Area High School on Saturday, Dec. 5, 2015. (Mark C Psoras/MediaNews Group File)

In 2013 they took their first big step towards 2015. The Cardinals went 9-2 and finished second in the SOL American with a 6-1 conference record. They lost to Abington in the first round of districts. This was the year some key 2015 players started getting playing time. Running back Kaleif Lee totaled 556 yards and 13 touchdowns as a sophomore while his classmate Henry Winebrake earned first team all-conference honors at linebacker. Sophomore Jack Rapine was named second team all-conference on both sides of the ball. Quarterback Ryan Stover got his first taste of varsity action. As a backup to John Derr, Stover was 17-for-26 for 296 yards and a pair of touchdowns on the season while running eight times for 28 yards.

Upper Dublin’s Stacey Gardner (3)  is congratulated by Kaleif Lee (26) and teammates after his touchdown against North Penn during the second half of the District 1-4A final at Souderton Area High School on Saturday, Dec. 5, 2015. (Mark C Psoras/MediaNews Group File)

The 2014 team won its first outright SOL American title of the decade, going a perfect 7-0 in conference play and ending the year 11-2. They won nine straight games after an early-season loss to Abington — including a 34-28 win over PW that proved to be the conference championship game — and reached the District 1-4A semifinals. They hammered Council Rock North, 48-14, in the first round and West Chester Rustin, 41-23, in the quarterfinals. The season ended with a 25-14 loss against Pennsbury. Ryan Stover earned the first of back-to-back Times Herald Offensive Player of the Year awards by throwing for 2,187 yards and 21 touchdowns and adding 218 yards and three more scores on the ground. Lee led the rushing attack with 1,057 yards and reached the end zone 21 times.

Everything came together in 2015. Stover threw for 2,525 yards and 27 touchdowns while rushing for over 1,000 yards and 13 scores. Lee ran for 1,028 yards and 19 touchdowns and Stacey Gardner, who had also seen playing time over the previous two years, ran for 528 yards and 15 scores. Rapine led a balanced receiving group with 539 yards and five touchdowns. The team went 14-1, staying undefeated through SOL American and District 1-4A championships. They beat Garnet Valley in the first round of district and Upper Darby in the quarterfinals before avenging their 2014 loss against Pennsbury, winning 24-14. In the district title game they outscored North Penn 29-0 in the second half to win the program’s first championship, 46-21.

Upper Dublin celebrates as it is presented the District 1-4A championship trophy after the Cardinals’ 46-21 victory over North Penn at Souderton Area High School on Saturday, Dec. 5, 2015. (Mark C Psoras/MediaNews Group File)

The Cardinals success continued the rest of the decade. They shared the conference championship in 2016 and reached the second round of the District 1-5A playoffs. The 2017 season saw a step forward to the district 5A semifinals before winning another conference and District 1 championship in 2018 with a 12-2 record. Last season was set to be another good one, but an injury to senior quarterback and safety Mike Slivka set the team back and they finished 5-5, losing in the first round of districts.

In all, the 2010s were a great decade for coach Bret Stover and the Cardinals. They built up to the program’s first district championship in 2015 and, after losing most of that team’s key players to graduation, climbed back to the top of the mountain again in 2018.