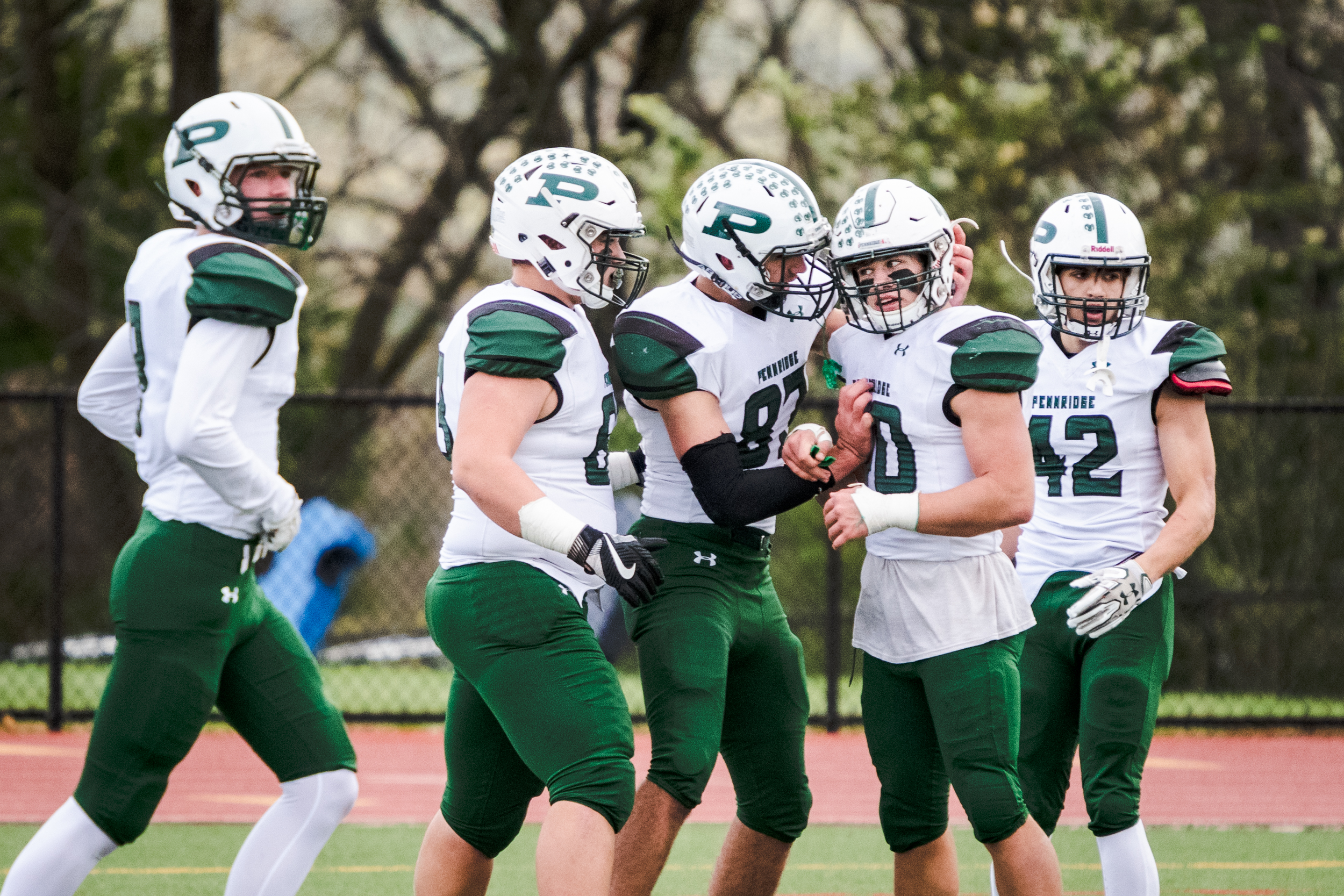 Pennridge players celebrate around Shane Hartzell (40) after he returned a blocked punt for a touchdown in a game against Central Bucks East on Saturday, Oct. 27, 2018. (James Beaver/For MediaNews Group)

The wait for a campus visit turned out to be well worth it for Shane Hartzell.

A rising senior at Pennridge, Hartzell only needed one visit to Villanova to know it was the place he wanted to call home starting in the fall of 2021. Despite missing all but two games of his junior year, Hartzell was still a coveted football prospect with plenty of suitors.

That is, he was until Saturday when Hartzell committed to the Wildcats.

“I just got on campus to visit last week and as soon as I stepped on and looked around, I knew it was the right spot for me,” Hartzell said Saturday evening. “Everything the coaches have done in presenting to me, they’ve been great and that pretty much sealed it up as No. 1 for me.”

Hartzell chose Villanova over a final four that included Princeton, Monmouth and Lehigh. The selection was pretty quick overall, with Villanova extending an offer to Hartzell at the end of March and the linebacker listing his final four a week ago.

An ankle ligament injury cost Hartzell most of his junior season, which is a pivotal one for players aiming to play at the next level, but his body of work was still enough to keep him on program radars. Of course, some schools moved on after his injury, which Hartzell said he understood and the defensive standout said it was a sign as well.

“My first though when it happened was, ‘all these schools are going to lose interest,’ and some of them did,” Hartzell said. “In the end though, you know maybe that school wasn’t the best for you. As it went on, everything panned out, the schools that really wanted me showed themselves and that’s what I went with.”

Hartzell’s selection drew plenty of positive feedback on social media, with several recruiting services and a few local coaches calling it a steal for the Wildcats program. The Villanova coaching staff sees Hartzell as an inside linebacker but he added he’s willing to play any position asked.

A 6-foot, 215-pound tackling machine, Hartzell knew early on he wanted to play football in college and making the varsity roster as a freshman at Pennridge told him he was on that path. He also follows older brother Joel, an offensive lineman at Duquesne, to college football.

“Ever since pee-wee, I always felt like I had a step up on other kids,” Hartzell said. “But it wasn’t until I got to freshman year and being pulled up to varsity, that’s when I realized I could really change my life with this.”

Hartzell credited Pennridge coach Cody Muller and Rams assistant Tim Taggart for helping him throughout the recruiting process and during his injury rehab.

For now, Hartzell and his teammates are taking part in voluntary summer workouts preparing for the fall. The PIAA did announce it plans to move ahead as scheduled with the fall season, but there’s still a chance things could change before football teams begin heat acclimation starting August 10.

“We’ve been preparing as if we’re going to have a season and we’ll keep doing that until they say otherwise,” Hartzell said. “If we don’t play in the fall, we’ll keep getting better and hopefully we can play in the spring.”

Hartzell pointed out sophomore linebacker Phil Picciotti as a player to watch this upcoming season and overall, is looking forward to sharing his knowledge with the team’s younger players this season.

“Anything to better the team, I’d love to do that,” Hartzell said. “The biggest thing is staying true to yourself and not getting too low or too high.”