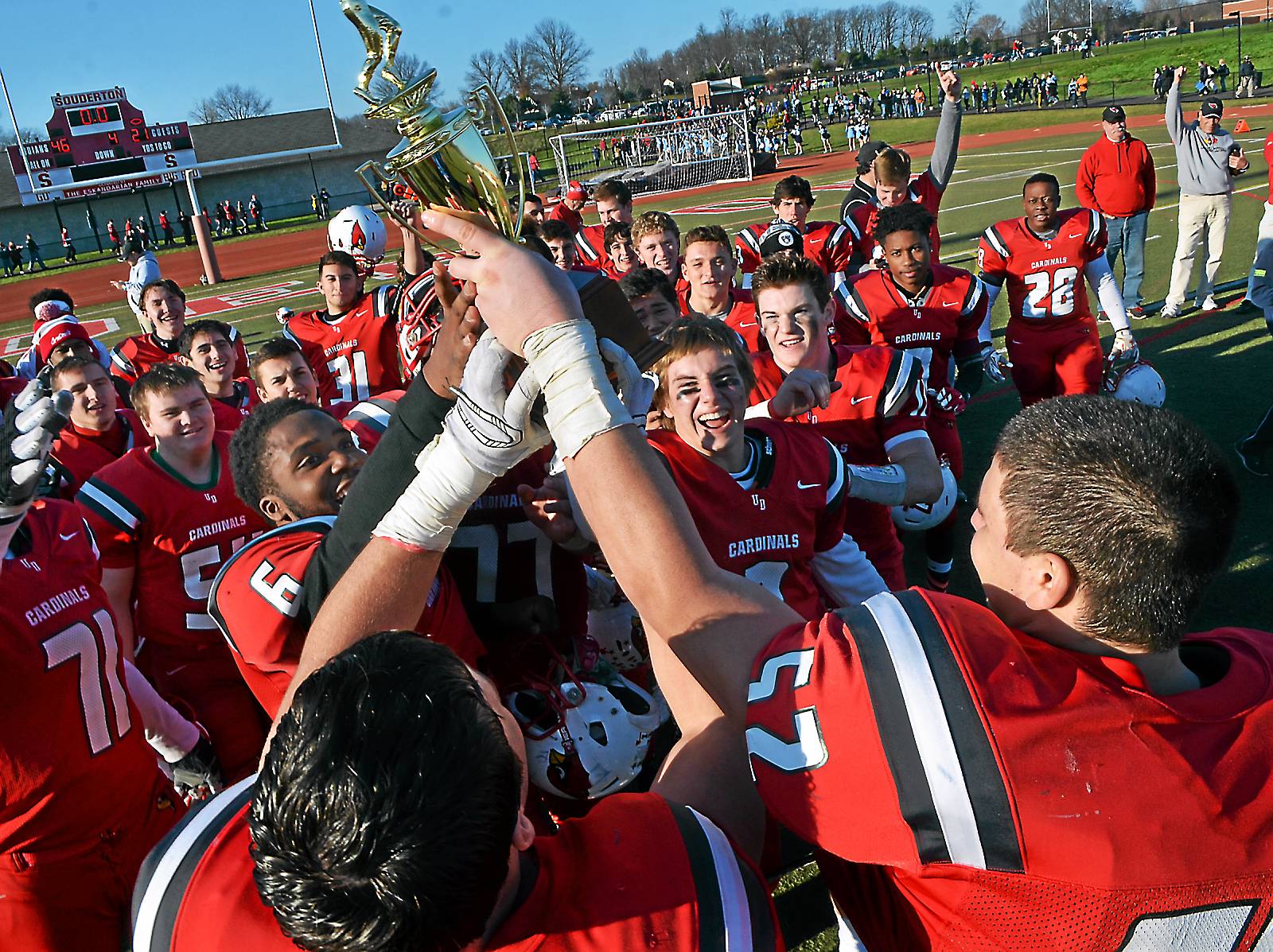 In one of the more lopsided matchups of the tournament, the Cardinals earned the title of the Reporter/Times Herald/Montgomery Media Football Team of the Decade by defeating La Salle 2012, 31-17, with 69.8 percent in the votes.

The fifth-seeded Cardinals got the ball to start the game and went straight down the field, scoring on a 27-yard connection between quarterback Ryan Stover and receiver Jack Rapine.

After forcing a La Salle three-and-out, Upper Dublin’s offense stayed in rhythm, this time scoring on a four-yard Kaleif Lee run, making it a 14-0 game late in the first quarter.

Quarterback Chris Kane managed to move the 14th-seeded Explorers deep into Upper Dublin territory twice in the second quarter, but a field goal and a failed fourth down attempt left La Salle with just three points. Stover connected with Michael Sowers for a seven-yard score to send the Cardinals into halftime with a 21-3 advantage.

Kane stayed hot to start the second half, going down the field and connecting with receiver Sean Coleman for an 18-yard score to cap off a drive that took just five plays and less than three minutes of gametime, cutting their deficit to 21-10.

Upper Dublin’s offense, however, never wavered. Stover and Lee powered the offense down the field before Stacey Gardner found the end zone from one yard away, extending the lead back to three scores, 28-10, late in the third quarter.

Kane and Coleman connected four times on the ensuing possession to get the Explorers into scoring range before Jimmy Herron ran for a touchdown early in the fourth quarter, making it a 28-17 game.

Upper Dublin’s Stacey Gardner (3) is congratulated by Kaleif Lee (26 and teammates after his touchdown against North Penn during the second half of the District 1-4A final at Souderton Area High School on Saturday, Dec. 5, 2015. (Mark C Psoras/MediaNews Group File)

A surprise onsides kick attempt did not fool the Cardinals, and they took over at midfield with 9:32 remaining. An eight-play drive – all runs – took more than four minutes off the clock and a Todd Spirt field goal made it 31-17 with five minutes left.

Kane led the Explorers back into Upper Dublin territory, but a fourth down stop by the Cardinals defense sealed the game and allowed their offense to run out the clock.

Most of La Salle’s offense came from Kane’s arm. He threw for 277 yards and a touchdown. Coleman accounted for 145 of those yards and the touchdown while Herron had 127 combined rushing and receiving yards and a rushing touchdown.

The Team of the Decade title adds to an already impressive resume for the 2015 Upper Dublin football team. The Cardinals won the Suburban One League American Conference and District 1-4A title before losing to Parkland in the PIAA-4A state semifinals to finish the season with a 14-1 record.