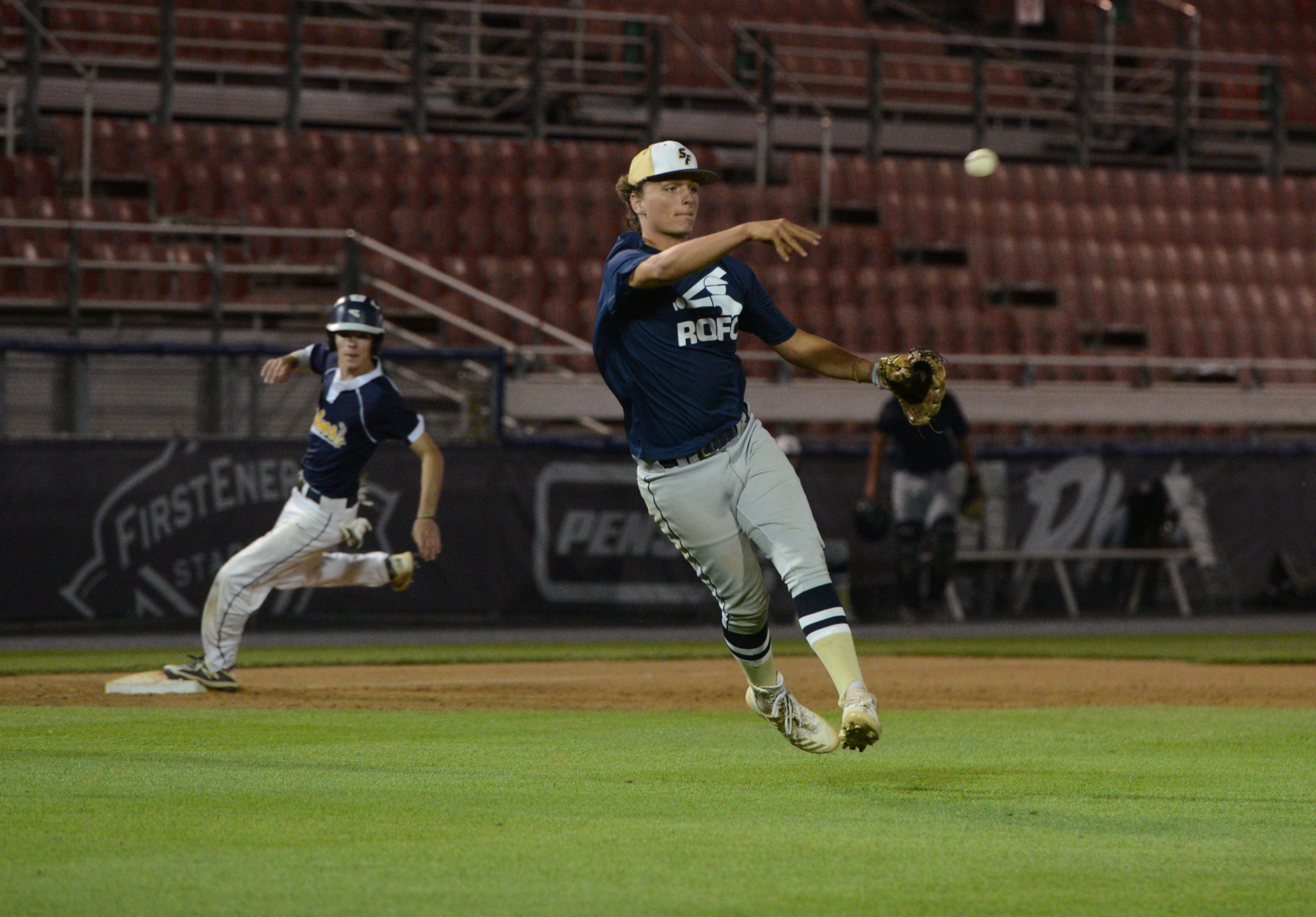 Members of the Spring-Ford and Wissahickon high school baseball teams will never get back their missed 2020 seasons.

While those official campaigns were wiped by the COVID-19 pandemic, players from both teams will still have a few baseball memories to cherish, the first of which came Thursday night at the Reading Fightin Phils’ FirstEnergy Stadium.

Royersford Complete Game and the Wissahickon Blues met Thursday in the Baseballtown Charities Showcase with Royersford coming out on top a 10-8 winner in the first of three games for the teams at the minor league ballpark.

Though the showcase squads are officially unaffiliated from their schools and there is no league title or district championship on the line, the objective is to give the players a little piece of their lost seasons.

“It sucks  not to have our senior season,” said Royersford starting pitcher Zach Male, who will play at Kutztown University next season. “We were going to be good this year, man. … It’s a good time. It’s good to play some ball before college. We’ve gotta get the most out of it. We’ve gotta get the most that we can get with the games that we have.”

Wissahickon’s Teague DiNicola makes a throw from the ground for an out in Thursday’s Baseballtown Charities Showcase at Reading FirstEnergy Stadium. (Owen McCue – MediaNews Group)

Each squad will have the opportunity to play three games, stretching from July 14-Aug. 3 at FirstEnergy Stadium. Royersford will play Colonial Baseball (Plymouth Whitemarsh) at 7:30 p.m. on July 21 and Mays Sandwich Shop (Wilson-West Lawn) on July 27 at 7:30 p.m.

“It’s pretty awesome,” said Wissahickon’s Andrew Buck, who tallied two hits, scored two runs and drove in another two. “We’ve grown up playing together a lot of us since we were six or seven. To be back out here one last time with friends, it’s a very cool experience.”

“It’s just our last ride with all these guys who we’ve played with since we were young and we’re just looking to have fun and get some wins while we’re at it too,” Wissahickon’s Andrew Booth added.

Royersford got out to an early lead with three runs in the first inning off hits from Griffin Straface, Zach Kratz and Matt Walbridge and extended that advantage to 6-2 in the fourth by taking advantage of a pair of free passes.

Wissahickon erased the deficit with a six-run bottom of the fourth, finished off with a bases clearing double by Sam Junker. Royersford came right back with four runs of its own in the top of the fifth, highlighted by a two-run triple from Straface, to go up 10-8.

Royersford’s Griffin Straface smokes a 2-RBI triple to center to put his team up 9-8 in the 5th. pic.twitter.com/XvLqbMHSwj

Male threw the first two innings for Royersford, followed by Cooper Webb, CJ Ditterline, Jake Murgitroyde, Tristan Warwick and Justin Calvarese, who struck out the final batter of the game to close out the victory. Nate DeVincent tossed the first two frames for Wissahickon, followed by two from Teague Dinicola and one apiece from Mike Gorman and Junker.

“It’s kind of fun right now,” said Spring-Ford senior Travis Calvarese, who tallied a single and a run scored. “I felt like in the season I was stressing a little bit. I’m loose right now, having a fun time right now. It’s my last time out here, so I’m making it the best time.”

Both squads said they got together for about a month before Thursday’s game. The Wissahickon seniors have been meeting Tuesdays and Thursday to try and knock off the rust.

The Royersford players have been gathering once a week at Complete Game Elite Baseball Training, which sponsored the team for the showcase event, and players have also gotten in workouts on their own.

Even with some time spent with their teammates already under their belts, the competitive atmosphere brought by Thursday night’s contest was much appreciated.

“Getting hype in the dugout is always fun, chirping the other team,” Male said. “I love it. It’s a competition you know.”

With no legion season, Booth and Buck both mentioned they had interest in playing in the Perkiomen Valley Twilight League this summer. Some of the younger players from both schools are participating on travel teams and in showcase events.

Travis Calvarese, who won’t be playing baseball next year at Misericordia University, called the three games in the Baseballtown Charities Showcase his ‘Last Dance,’ referencing the popular Michael Jordan documentary.

“It’s like a dream come true pretty much,” he said.