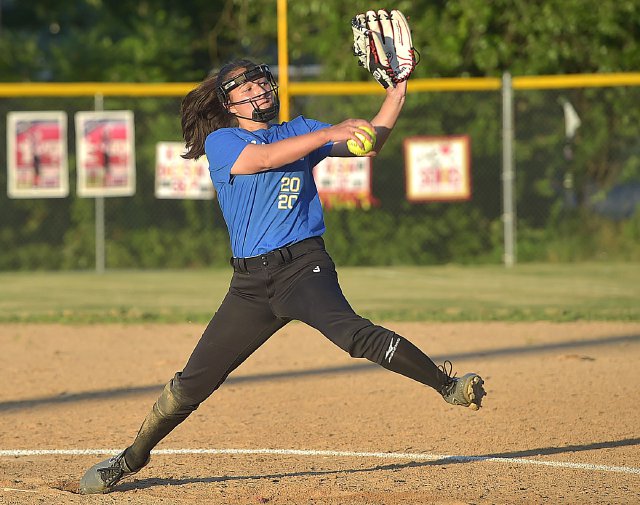 Caln – For the 24 recently-graduated Chester County high school softball players who participated in the Senior Game 2020 event at Caln Park Tuesday evening, it was a nice way to celebrate a scholastic softball career that ended too soon.

“I was so excited this game was able to be played,” said Natalie Beebe, who won the pre-game home run hitting contest and was the winning pitcher in the seven-inning game that followed. “I got to play with my senior friends one more time. The home run contest was a nice extra to our typical Senior Day game.”

Nearly 200 fans (mostly parents and families of the players) came to the event, which included an introduction of each recently-graduated player at home plate, followed by the home run hitting contest, then the seven-inning scrimmage.

Phoebe Clemens, who was one of the six recently-graduated Coatesville players in the lineup, said, “This event was really important to us. I’ve been playing with most of these [five Coatesville grads] for the last 7-8 years. And it was really special to have the game under the lights at Caln Park.”

Sherry Clemens (Phoebe’s mom) said, “About a month or two ago, Becky Capuzzi, a softball parent from West Chester Henderson, explored the possibility of gathering senior softball players from area high schools for a friendly scrimmage. The response from the players we contacted was good – 24 girls from six area high school responded with a resounding ‘yes.’ We set the date for after the school year to avoid any issues with PIAA or school rules and regulations.”

On Wednesday morning, Capuzzi said, “Last night’s game was fantastic. Just about every person that came up to me mentioned they wanted this to become an annual event. With everything abruptly stopping for these seniors on March 13, I just felt we had to try to do something. Having a four-man umpire crew volunteer to run this game was amazing – Joe Chambers helped put the crew together and get the field ready, and his employer, Campbell Soup, gave him two days off so he could be a part of this. It was amazing support from the community in so many ways.”

The game ended on a dramatic play – left fielder Morgan Dey caught the final out, racing in for a fly ball and making a sliding catch with two runners on base. After she caught the ball, her teammates mobbed her in celebration of the victory.

A smiling Dey, talking with some of her teammates after the game, said, “This was really a special night – it was our last night together.”

Lackawanna College-bound Erin Sporn, who cracked a two-run double for Team 2, said, “This was a very special night. I was really having fun out there – when I was at bat I told the other team’s catcher, ‘Want to give me a good pitch to hit?’ I’ve known all these girls on both teams since Little League.”

“I enjoyed the experience and thought it was fun to play with the girls I’ve played with or against for the past eight years,” said Nicole Capuzzi. “Throughout this crazy time, I’m glad we were able to come together and celebrate the senior class.”

“Mark Winther, President of Caln Little League, worked with the organizers to make sure all coronavirus guidelines were in place,” said Sherry Clemens. “Steve Macon and Joe Chambers made sure the new scoreboard was installed in time for the game, and they spent many hours preparing the field.”

Rochelle Roberts, of Photography by Ro, took photos of the graduates and their parents. Rita’s Water Ice of Exton sent their mobile truck to provide refreshments.

SENIOR WEEKS – THE FINALE: Unionville’s Krautzel twins leave high school track in their wake as they head to Villanova together
Spring-Ford, Wissahickon players get taste of cancelled 2020 season at Baseballtown Charities Showcase