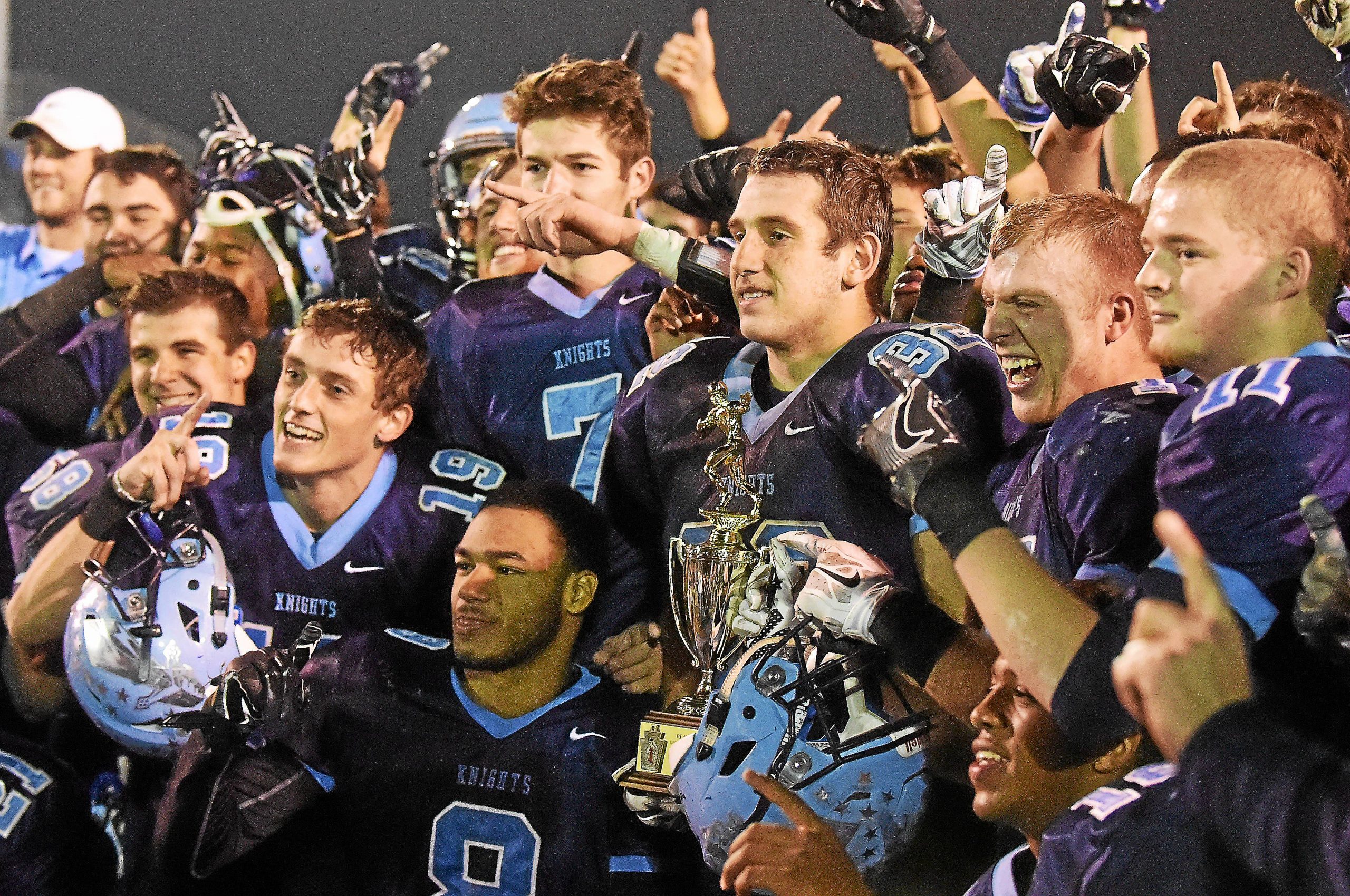 North Penn celebrates its seventh District 1 title after the Knights' 48-38 win over Garnet Valley in the Class 6A final at Crawford Stadium on Friday, Nov. 25, 2016. (Pete Bannan/MediaNews Group)

North Penn football’s 2016 season stands out for a number of reasons. The Knights went 14-1 and won the Suburban One League Continental Conference and the District 1-6A championship. Quarterback Reece Udinski and Ricky Johns led an offense that put up video game numbers from Week 1 through the state semifinals.

What really separated this North Penn squad, the No. 6 seed in the Reporter/Times Herald/Montgomery Media Football Team of the Decade tournament, is just how dominant it was against quality competition. During their 14 wins to reach the PIAA-6A Final Four, the Knights outscored opponents by an average of 41.5-15.2. Every game they won was decided by more than one possession.

They made a statement right out of the gate, beating perennial powerhouse and defending Philadelphia Catholic League 4A champion La Salle, 33-24, Week 1. Udinski started his historic campaign by connecting with seven different players and throwing four touchdowns. The offense totaled 400 yards.

Bob Raines–Digital First Media
North Penn’s Ricky Johns runs for a touch down after grabbing Reece Udinski’s pass over the middle during the game against Central Bucks West Sept. 16, 2016.

North Penn followed that with a pair of non-league wins over Downingtown East and Pennsbury, 23-7 and 38-0, respectively. Udinski totaled near 600 combined passing yards in the two wins while Johns racked up more than 100 yards from scrimmage per game and two touchdowns. Running back Nick Dillon scored four times against Pennsbury.

After the 3-0 start, the Knights got into their SOL Continental schedule. Their closest game over the six league contests was a 33-14 victory over Central Bucks East. The other five games featured scores in the 40s or 50s, highlighted by a 52-6 win over William Tennent to clinch the outright league title.

Central Bucks South finished second in the league that season with a 5-1 SOL Continental record, but they were no match against this North Penn team on Sept. 30. In the 42-13 win, Udisnki threw for 367 yards, three touchdowns and three interceptions. Johns hauled in seven passes for 156 yards and two scores and Jake Hubler grabbed eight receptions for 115 yards and a touchdown.

After a 45-7 non-league win over Abington in the regular season finale, the Knights advanced to the District 1-6A playoffs – the first year of the 6A classification – as the No. 1 seed.

They looked every bit the top-ranked squad throughout the tournament. They beat Haverford, 56-7, in the opener before edging Spring-Ford, 28-19, in the quarterfinals. Dillon ran for 128 yards and four touchdowns in a 42-25 semifinal win over Coatesville to set up the district title game against Garnet Valley.

With the championship on the line, North Penn’s offense brought its best. Udinski threw for 444 yards and four touchdowns in the 48-38 victory. Johns had 209 receiving yards and a touchdown while Dillon crossed the goalline twice on the ground and once through the air.

“Last year at this point, we lost to Upper Dublin and I don’t think any of the seniors forgot about that,” Udinski said, referencing the 2015 District 1-4A championship game. “Tonight, to play at Crawford Stadium with an undefeated record, that was something to play for.

“We never looked back and kept pouring on the points.”

North Penn coach Dick Beck gets a cool bath as his team celebrates its seventh District 1 title Friday night with a 48-38 win over Garnet Valley in the Class 6A final at Crawford Stadium on Friday, Nov. 25, 2016. (Pete Bannan/MediaNews Group)

North Penn’s head coach Dick Beck, a Class of 2018 Montgomery County Coaches Hall of Famer, had high praise of Udinski’s 23-for-28 performance with the district championship up for grabs. He said Udinski’s game was more impressive than Pete Stoll’s 250-yard five-touchdown game in the 2005 district championship.

“There’s been a lot of games on this field but no one has played better than that,” Beck said of Udinski. “He was so on target. He was just zoned in.

“Every read that we went over in practice, he attacked right away. You could just see he was super sharp. I thought Reece did a great job moving in the pocket — that first touchdown pass was all him. He kind of danced around the pocket — his eyes always downfield — and then for him to see Nick (Dillon), he was like ‘here we go.’”

The Knights historic season came to an end in the state semifinals the following week against St. Joseph’s Prep. Hawks running back and recent second-round Detroit Lions draft pick by way of Georgia D’Andre Swift ran for 268 yards and four touchdowns in the Prep’s 35-25 win.

North Penn nearly pulled off the wild upset. The SOL Continental champs led 17-14 at the start of the fourth quarter and had the ball, trailing 28-25, around midfield late in the game. A Knights fumble – their fourth turnover of the game – halted the drive and allowed the Hawks to put the game out of reach.

Udisnki finished the season with 4119 passing yards and 39 passing touchdowns to 12 interceptions. Johns accounted for 1296 of those yards and 11 scores while Justis Henley grabbed 940 receiving yards and seven touchdowns and Hubler 859 yards and five touchdowns. Dillon led the ground attack with 1046 yards and 23 scores.

The Knights are matched up against No. 14 La Salle 2012 in the second round of the Team of the Decade tournament. Fan voting will decide who advances to the semifinals. Cast your vote on Twitter @ReporterSports through Saturday at noon.

Pioneer Athletic Conference Football History
SENIOR WEEKS: Barthmaier did it all for Coatesville, from football field to baseball diamond