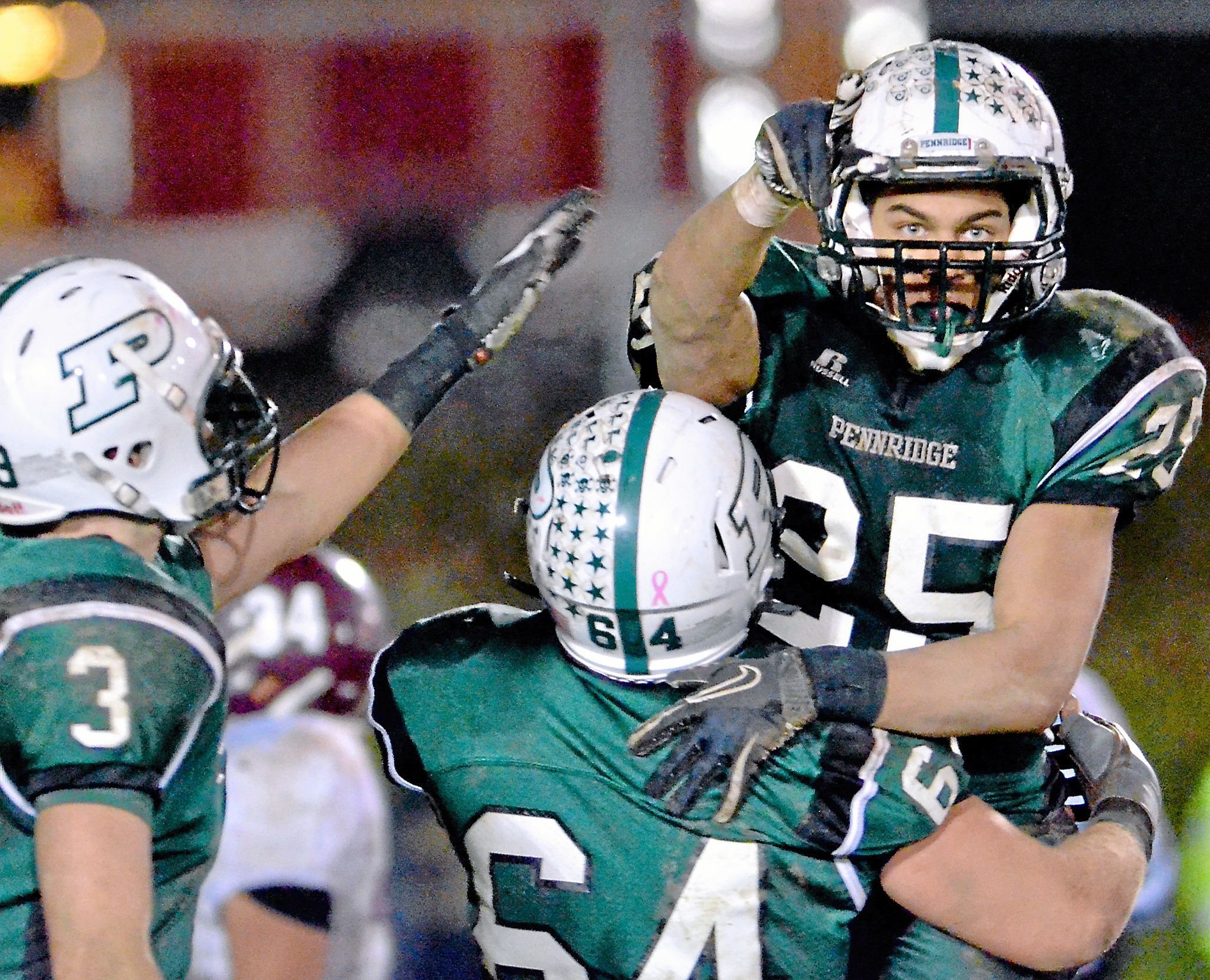 Pennridge's Mike Class (25) is hoisted by teammate Cory Blazer (64) after his third touchdown against Abington in the fourth quarter of the Rams' District 1-4A first round game at Poppy Yoder Field on Friday, Nov. 9,2012. (Mark C Psoras/MediaNews Group File)

All six were eliminated by fan voting in the first round.

No. 16 Pennridge 2012 def. No. 1 Archbishop Wood 2011 >> The Rams defeated the top-seeded Vikings with 59 percent of the votes. The 2012 Suburban One League Continental Conference champions and District 1-4A semifinalists relied on star running back Mike Class to pull off the upset. He ran for 190 yards and three scores in the 27-17 win over Archbishop Wood.

No. 8 North Penn 2011 def. No. 9 Archbishop Wood 2016 >> The Knights added another big win over a PCL powerhouse by beating the Vikings with 67 percent of the votes. North Penn, who beat La Salle in the 2011 state semifinals after winning the District 1-4A title, used a balanced attack in this 31-20 victory. Corey Ernst threw for a pair of touchdowns while Ralph Reeves scored twice from a combined three yards out.

No. 5 Upper Dublin 2015 def. No. 12 Cheltenham 2019 >> The Cardinals continued their Suburban One League dominance over Cheltenham, earning 76 percent of the votes. Quarterback Ryan Stover did a little bit of everything in the 35-17 win, throwing for three touchdowns and rushing for another.

No. 4 La Salle 2010 def. No. 13 Upper Dublin 2018 >> In the tightest matchup of the opening round, the Explorers held off the Cardinals, winning with 56 percent of the votes. Jamal Abdur-Rahman  scored a touchdown with 2:47 remaining in the game to give La Salle a 24-20 lead and the Explorers defense forced a turnover on downs at their own 30-yard line.

No. 6 North Penn 2016 def. No. 11 Archbishop Wood 2019 >> The Knights undefeated season came to an end in 2016 when they lost to a PCL power in St. Joseph’s Prep in the state semifinals, but they would not denied this time against Archbishop Wood. North Penn advanced to the second round with 71 percent of the votes. Reece Udinski threw for more than 300 yards and three touchdowns — two to receiver Ricky Johns — in a 28-10 win.

No. 10 North Penn 2010 def. No. 7 Archbishop Wood 2013 >> North Penn sent their third team to the second round and beat Archbishop Wood a second time in this matchup, earning 63 percent of the votes. Craig Needhammer ran for 80 yards and a touchdown while Dom Taggart scored two touchdowns on the ground, leading the District 1-4A champs to a 24-17 win.

No. 15 Pope John Paul II 2019 def. No. 2 Archbishop Wood 2014 >> After beating Neumann-Goretti in the District 1/12-3A subregional championship game, the Golden Panthers picked up another win over a PCL team in the first round of the Team of the Decade tournament, topping Archbishop Wood with 59 percent of the votes. Kamal Gray accounted for three touchdowns — two through the air and one on the ground — in this 21-17 win over the Vikings.

Voting for the second round will take place on Twitter @ReporterSports.