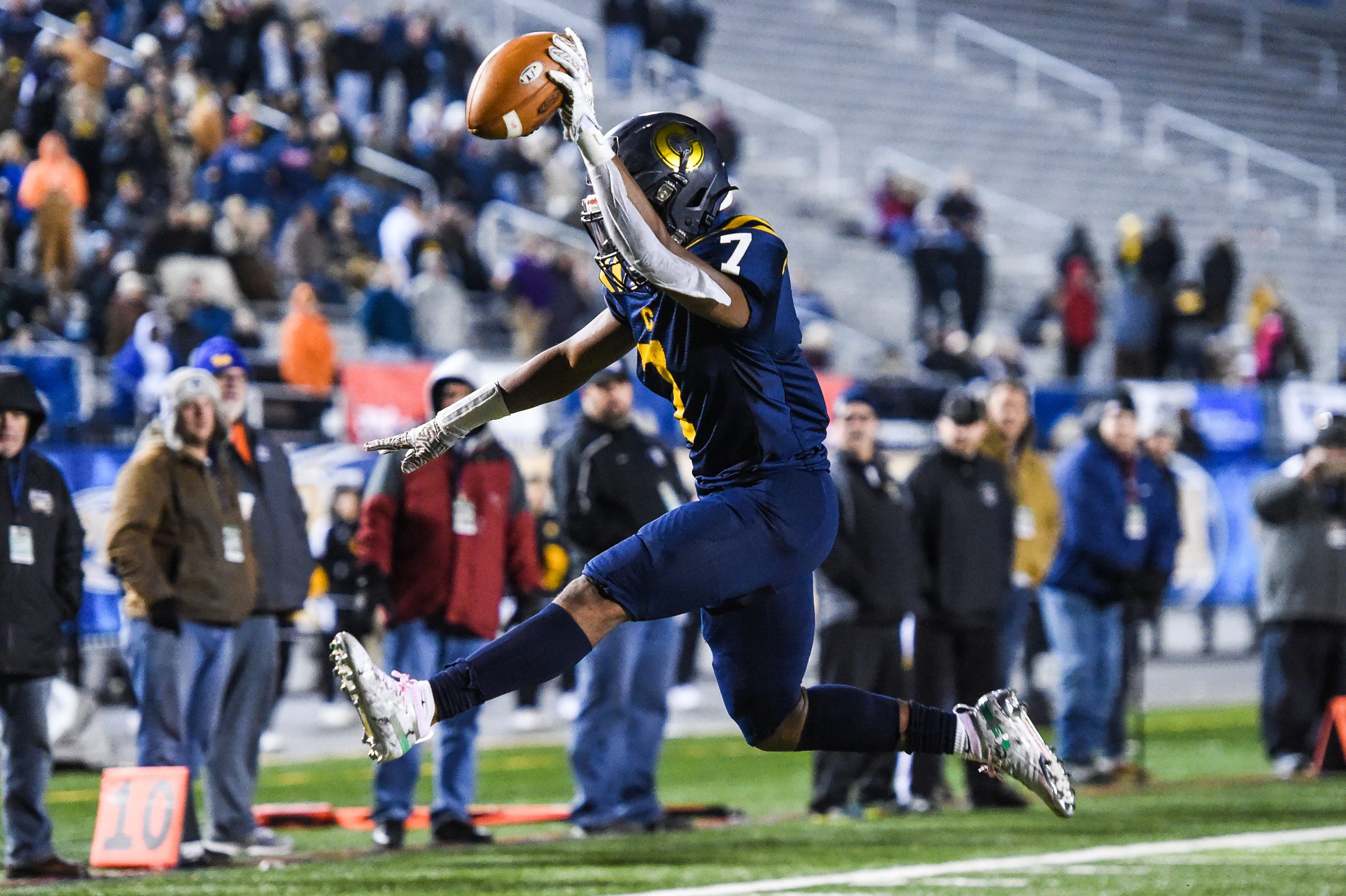 Cheltenham's Sidiqq Williams (7) leaps into the end zone for a touchdown late in the game to give the Panthers the lead during the PIAA Class 5A Championship at Hersheypark Stadium in Hershey on Friday, Dec. 6, 2019. (Mark Palczewski/For MediaNews Group)

The 2019 football season was an exciting one for the Reporter/Times Herald/Montgomery Media Area schools.

Central Bucks West won a tight Suburban One League Continental Conference race with North Penn, Souderton and Central Bucks South all finishing within a game of the league’s top spot. Archbishop Wood won its sixth state championship of the 2010s and Plymouth Whitemarsh won its first district playoff game of the 21st century.

The most impressive seasons, however, belonged to Cheltenham and Pope John Paul II. Both programs completed dramatic turnarounds and won district championships, helping earn spots in the Team of the Decade tournament.

Cheltenham, ranked No. 12 in the 16-team field, finished 14-2 with SOL American and District 1-5A championships. The Panthers were four seconds away from beating Archbishop Wood for the PIAA-5A state title. For their efforts, five players landed first team All-League honors in seven spots — Jamir Barnes at running back and defensive back, Nate Felix on the offensive line, Nate Edwards at wide receiver and defensive back, Darrenmeen Xayamoungkhoun at defensive end and Lateef Harris at defensive back.

Cheltenham’s Nate Edwards (6) rushes for another Panther first down against Kennett during their District 1-5A semifinal on Friday, Nov. 15, 2019. (James Beaver/For MediaNews Group)

The season marked a historic turnaround for the Panthers program. The team finished .500 or worse from 2013 to 2017, with the 2017 campaign ending at 2-8 in head coach Ryan Nase’s first season. They went 8-4 in 2018, finishing second in the SOL American to Upper Dublin and losing to the Cardinals in the second round of the district playoffs. Nase’s third year was the best in Cheltenham history.

“We knew it was gonna get better if we just stayed the course and got the kids to buy in,” Nase said after the district championship. “People ask me all the time, ‘what’s been the biggest change? What did you bring that changed things?’ And I think the only thing that I brought was that the kids trusted me.”

Pope John Paul II, the No. 15 seed in the Team of the Decade tournament, experienced a similar turnaround. The Golden Panthers won one total game between head coach Rory Graver’s first two seasons in 2014 and 2015 before building to a District 1/12-3A subregional championship season in 2019.

Pope John Paul II’s, from left, Justin Mitala, Kamal Gray and Andrew McDonald run off the field after the Golden Panthers’ win over Neumann-Goretti in the District 1/12 Class 3A fina on Friday, Nov. 8, 2019. (Owen McCue/MediaNews Group)

It was a season of many firsts for PJP — the first PAC Frontier championship, the first District 1 playoff win and the first district title.

“The program’s come from the bottom to the top,” Andrew McDonald, who transferred to PJP before the 2018 season, told The Mercury after their district championship win. “We didn’t expect this. No one did right? No one expected us to win, but we stayed with who we are … I couldn’t be more proud of this team.”

Both Cheltenham and Pope John Paul II had to face some powerhouse programs during the 2019 season and that doesn’t change in the Team of the Decade tournament. Cheltenham is matched against No. 5 Upper Dublin 2015, a District 1-4A champ, while PJP takes on No. 2 Archbishop Wood 2014, a PIAA-3A state champ, in the first round.

Voting to decide the winners ends Saturday at noon. Vote on Twitter @ReporterSports.

Senior Spotlight: Horn was the consummate captain for Pennridge
Four upsets in Reporter/Times Herald/Montgomery Media Football Team of the Decade Tournament First Round