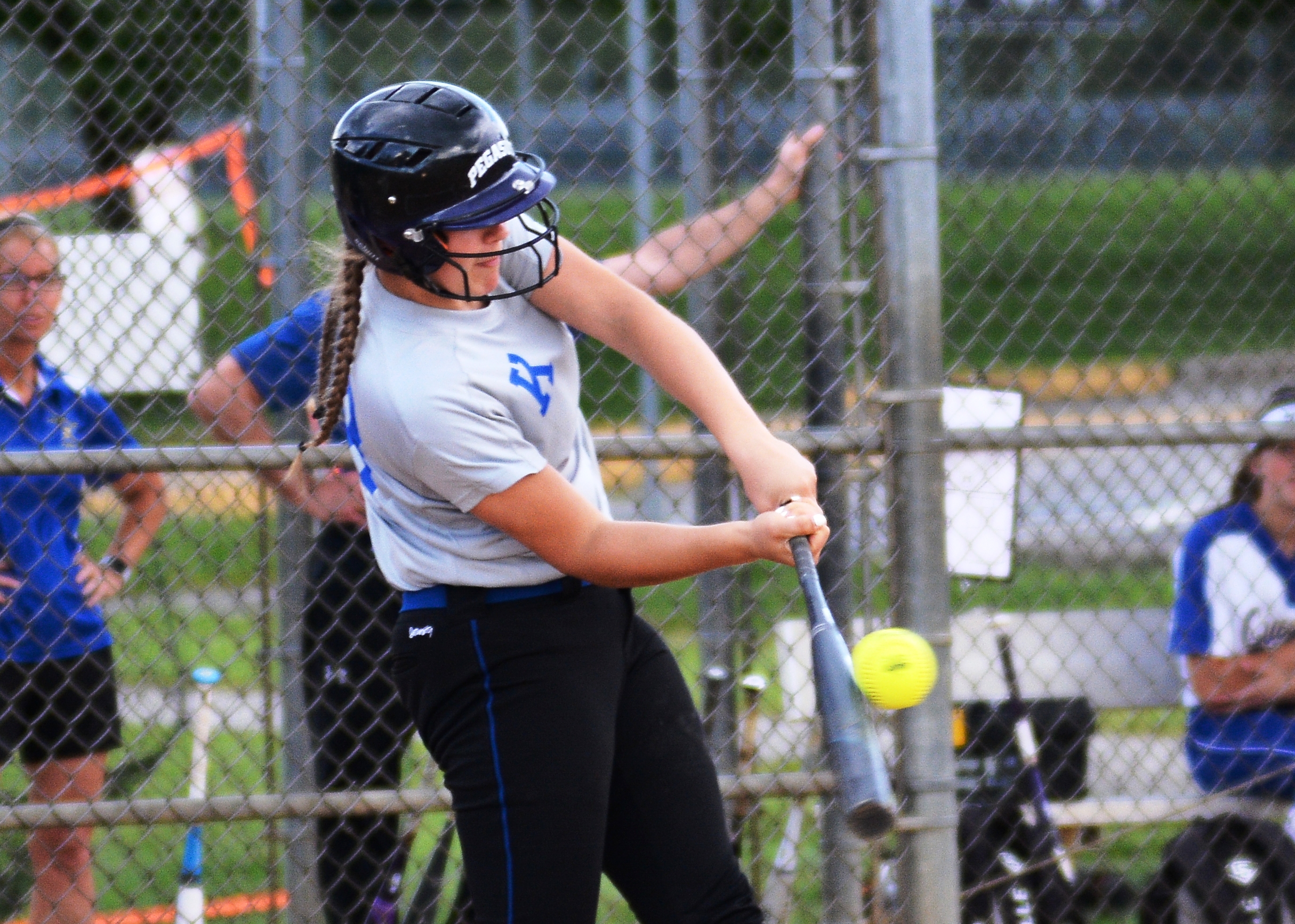 KENNETT SQUARE >> In this age of specialization, Kennett’s Ainsley Albert is a unicorn; the rare athlete whose favorite sport depends on which season it is and which uniform she is wearing.  Albert was a three-sport star for the Blue Demons, playing field hockey, basketball and softball.  And she excelled in each endeavor, despite having been diagnosed with Type 1 diabetes at just 8 years old.

“I enjoy playing all of these three sports equally,” said Albert. “It allows me to compete with a different group of girls and it keeps things interesting season to season.”

Her Kennett teams have seen their fair share of success over the past year, too.  Last spring, the softball team won the Ches-Mont League American Division, falling one win shy of a berth in the state tournament after a tough, extra-innings loss to Conestoga.  In field hockey this past fall, the Blue Demons won the American, and won a playoff game for the first time in over a decade, with Albert scoring a goal. “It was an awesome experience to be on such a successful team this year,” said Albert of the team’s run in field hockey.  “The girls on this team worked hard every day to reach their goal and no one was satisfied with anything less than full effort from everyone. This team definitely earned the success we had because everyone from the freshman to the seniors worked their tails off and pushed one another.”

It hasn’t always been easy.  Balancing athletics and diabetes is tricky in and of itself.  The slightest changes in blood sugar can have a deleterious effect on athletic performance.

“Ainsley was just starting her second softball season in 8U in April 2011,” said her father, Richard. “Our family had been running back and forth to John’s Hopkins in Baltimore while Ainsley’s grandmother was nearing the end of a losing battle with cancer. Ainsley and her sister had been staying home with a neighbor who noticed she was drinking an excessive amount of water. I had also been practicing softball with her and noticed that she had lost several pounds on her eight year old frame and was not herself. She was feeling fatigue, weak and tired.”

Those concerns led to a trip to the pediatrician, where a single pin prick in the finger changed everything.

“Her blood glucose was 450 milligrams per deciliter. The upper limit for a non-diabetic is 150 mg/dL,” said the elder Albert.

When properly managed, a diabetic can live a fairly normal life. There is however a constant burden – a constant weight. While the rest of us take our blood sugar control for granted, someone in Ainsley’s position is constantly trying to manage her blood sugar between 150 and 70 mg/dL. If her blood sugar gets too high it causes fatigue and lack of coordination. Too low can lead to confusion, disorientation and passing out. In the extreme it will be acute and life threatening. “As an athlete there have been multiple occasions when my blood sugar has gone low or high in the middle of a practice or a game and I would have to sit out for a little bit to get things under control and back in range,” said Ainsley.  “With my continuous glucose monitor, a dexcom, this task has become much easier because it relays my blood sugar to my phone. As long as I have my diabetes supplies and some apple juice on hand, in case of a low, I should be good.”

Albert hopes she can be an example for younger athletes who may also struggle with diabetes.

“My biggest advice to younger kids diagnosed with Type 1 is that they should never be afraid to ask for help because this is not a battle they were made to fight alone,” said Albert. “So many people are always more than willing to lend a helping hand when you need it. Diabetes can’t hold you back if you don’t let it.”

For the most part, Albert’s coaches need only think about Albert, the athlete, and not be concerned she’ll push herself too far.

“I’ve known Ainsley since middle school, and she is great at managing her diabetes,” said Kennett softball coach Lauren Gottstein.  “She knows what she can and can’t do, and won’t hesitate to let you know if there is anything wrong.”

Despite the challenges, Albert plays what might be the most demanding position on a softball field, catcher.

“I started catching when I was 10 years old because my little league had an all-star team and there were no catchers on the team, so my dad asked me to do it, and I fell in love with the position,” said Ainsley. “I like catching because you are right in the middle of the action and never get bored. From hyping up your pitcher when she’s feeling down to throwing out runners who are stealing there is never a dull moment behind the plate.”

Last season, Albert’s batterymate was one of the top pitchers in District 1, freshman Genevieve Ebaugh.  It’s funny how often a great pitcher is paired with a great catcher — and how much one can influence the other.

“Not only was Ainsley an awesome catcher, more importantly she was a great teammate,” said Ebaugh.  “And as good as she is behind the plate, she also was a big bat in the lineup and we are going to miss her next year.”

Gottstein was looking forward to seeing just how much damage that bat was going to do this season.

“She is just a good, all-around athlete,” said Gottstein.  “She’s always hit for power, and her swing was looking fantastic during the pre-season.  We were all looking forward to see the kind of power she was going to deliver for us hitting out of the four spot.”

Before COVID-19, the Blue Demons were poised for a monster season, with the entire starting lineup from last year coming back.  Albert would have been one of three returning senior starters, along with Jordan Barish and Katie LaCosta.

“Jordan and I played travel softball together back when we were 12 and have been on a crazy ride through Kennett softball together ever since,” said Albert. “I truly believe she was destined for an amazing season this year. We could not only depend on Jordan to get on base at the top of the line up but also take control of the outfield in center field.”

It’s anybody’s guess how far the Blue Demons would have gone if the pandemic hadn’t intervened, but Albert believes a deep postseason run was coming.

“We were due for a great season this year,” said Albert. “Everyone was upset by the way the season ended last year with that loss against Conestoga, so we were all craving some more wins and to make it to states this year.  With the teamwork and experience we had from last season there was no doubt we would have been able to see our goals through.”

Instead, Albert will concentrate on getting ready for the next step in life.  In the fall, Albert will be enrolled at the University of Pittsburgh, where she’ll study nursing.  Her athletic career has likely seen its end, though she is open to playing club softball.

Without a doubt, missing out on the kind of season Albert and her team were expecting hurts, and she’ll always wonder what would have happened.  But, being diabetic, Albert has a different perspective on the COVID pandemic than most her age.

“As much as the class of 2020 has lost due to coronavirus, I think it is important that all of us reflect on how lucky we truly are, and remember the people who have fared far worse than us losing our high school graduation and spring sports” said Albert.  “There are people who have lost family members and loved ones and although we are very upset and frustrated with our situation we must do everything in our power to ensure the safety and health of people who are more at risk.”