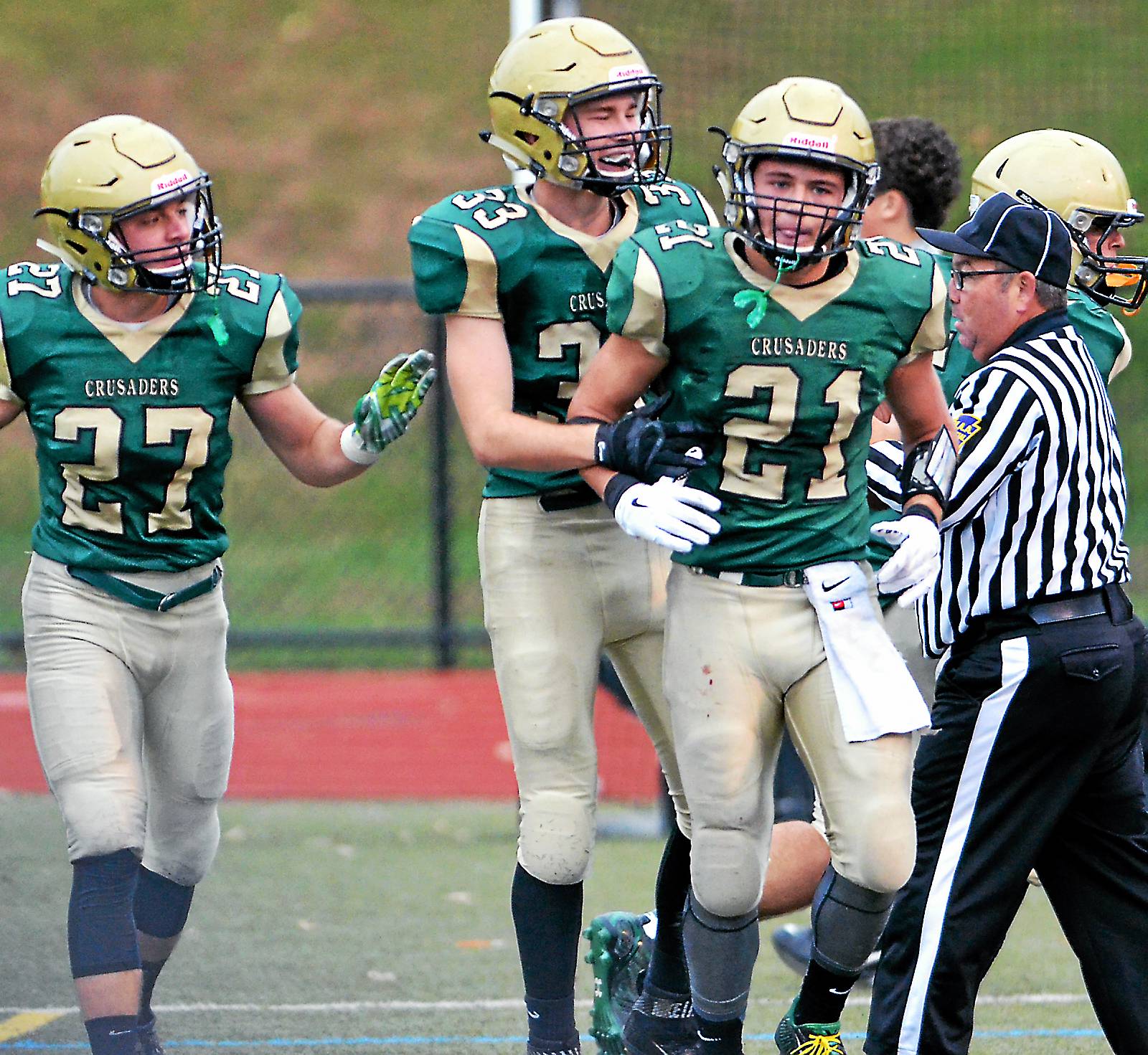 Lansdale Catholic's Ryan Quigley (21) celebrates with teammates after his touchdown against Conwell-Egan during first half action of their playoff contest at Cardinal O'Hara High School on Saturday, Nov. 7, 2015. (Mark C Psoras/MediaNews Group File)

The field for the Reporter/Times Herald/Montgomery Media Football Team of the Decade Tournament has been released. One of the first two things most will do — either before or after filling out their bracket — is looking at who got snubbed. Which teams deserved a spot in the field of 16 but were left out?

After a great decade of football in the area, it’s only natural for some accomplished teams to be on the outside looking in. Today, we will highlight some of the teams that just missed a spot in the tournament.

Lansdale Catholic 2015 >> The Crusaders went 8-3 in 2015 and reached the Philadelphia Catholic League 2A championship game, where they lost 7-6 to West Catholic. Running back Ryan Quigley was voted the 2A PCL Most Valuable Player and Tom Kirk the 2A PCL Coach of the Year. Quigley rushed for over 1100 yards and 16 touchdowns while tallying nearly 400 receiving yards and another six scores.

La Salle 2015 >> One of the criteria for Team of the Decade is memorable moments. While the Explorers only won eight games in 2015, finishing 8-4, they may have the most memorable moment in the area in the 2010s. After losing to St. Joseph’s Prep, 49-24, during the regular season, La Salle pulled off a wild upset, 29-28, for the PCL 4A title. Nick Rinella caught the game-winning touchdown between three Hawks defenders in the final minute. Syaire Madden, a Norristown native, rushed for more than 1200 yards and 14 touchdowns on the season, leading La Salle to the PIAA-4A state quarterfinals.

Pennridge 2017 >> The Rams went 11-3 in 2017, finishing second to North Penn in the Suburban One League Continental Conference with a 5-1 record and reaching the District 1-6A semifinals. Pennridge, the seventh seed in the district tournament, dominated its first two games — beating No. 10 Quakertown 24-0 and No. 2 Perk Valley 25-0. The Rams lost to No. 3 Garnet Valley, 28-20, in the semifinals. The balanced Rams had five players — Ryan Garner, Josh Pinkney, Nick Tarburton, Kyle Schetter and Evan Exner — rush for 479 or more yards.

Academy of the New Church 2018 >> The Lions went 10-0 in 2018, the first 10-win season in program history. While not part of a league, Academy of the New Church defeated teams from three different states (Pennsylvania, New Jersey and Delaware) in 2018. Only two games — a 38-37 overtime win over New Hope-Solebury and a 28-21 victory over Wilmington Friends — were within one score.

North Penn 2018 >> The Knights went 13-1 in 2018 with a perfect 6-0 SOL Continental record. They were the No. 1 seed in the District 1-6A playoffs and reached the championship game, where their season ended in a loss to Coatesville. Shamar Edwards led the offense with 1751 rushing yards and 14 touchdowns. Julian White added 678 rushing yards and 14 scores. North Penn picked up non-league wins over traditional powers Neshaminy (34-33 in double overtime in the season opener and 13-6 in the second round of districts) and La Salle (21-13 in Week 2).

North Penn running back Shamar Edwards (8) rushes up the middle for an early Touchdown against Central Bucks South during their game on Friday, Oct. 19, 2018. (James Beaver/For MediaNews Group)

Bishop McDevitt 2019 >> The Lancers won the District 11/12-2A subregional championship last season. They went 7-7 overall, including wins over Mahanoy Area and West Catholic in the subregional playoffs. Quarterback Lonnie Rice accounted for six touchdowns in the two wins. Rice threw two touchdowns and ran for two in a 28-13 win over Dunmore in the first round of the PIAA-2A state playoffs before McDevitt lost to Richland, 29-21, in the quarterfinals.

Central Bucks West 2019 >> The Bucks won the SOL Continental Conference with a 5-1 league record. Their 10-2 overall record helped them earn the No. 2 seed in the District 1-6A playoffs, where they reached the second round. West’s season-defining moment came when it defeated North Penn for the first time since 2000, 27-26, to clinch at least a share of the league title. Jack Fallon rushed for 116 yards and two touchdowns — including the game-winner with less than three minutes remaining — and grabbed an interception on the Knights final drive to seal the win. Fallon was selected as the Reporter/Times Herald/Montgomery Media Football Athlete of the Year after rushing for more than 100 yards in 11 of 12 games and scoring at least one touchdown in the first 11 games of the season.