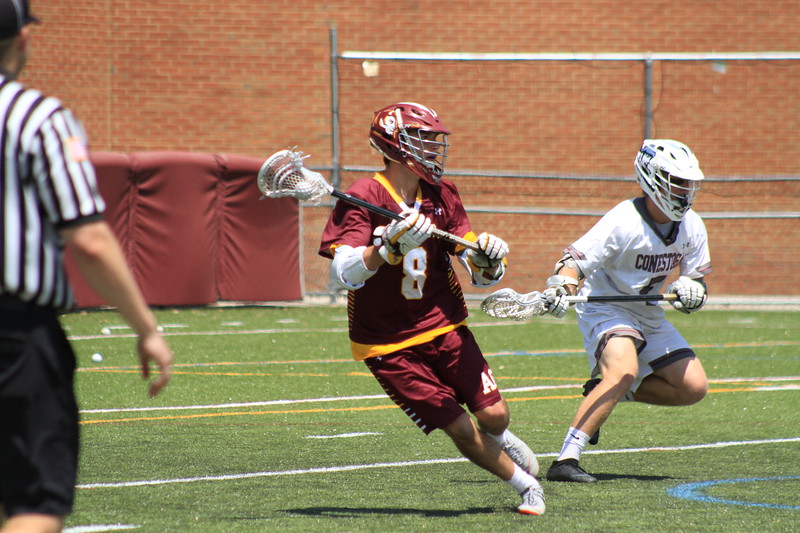 Avon Grove’s Jackson Muller is headed to the University of Michigan, where he hopes to walk on to the lacrosse team.

The cancellation of the 2020 high school lacrosse season came more than two months ago, and yet the Avon Grove boys’ squad is still getting together — without the aid or presence of any coaches — to stay fit, work on their skills, and have some fun with their friends.
The COVID-19 pandemic cancelled all official practices and games, but it wasn’t enough to stop team captains Jackson Muller, James Chastain and Michael Russo from moving forward with what they call ‘Captain’s Practices.’
“It’s basically a practice were the captains organize a meeting at a park,” said Muller, a senior from New London. “The coaches aren’t there and we kind of mess around and have some fun.”
In the last two weeks, since Harmony Park in West Grove was reopened, the Red Devils have had a pair of Captain’s Practices so far, and many more are expected.
“They have some lacrosse nets,” Muller explained. “It’s where the (Avon Grove Wildcats) youth program practices. That’s the only place with nets other than the high school, which is closed.
“Getting all the guys together again has been nice. We only had a few real practices and then the season was abruptly cut. Mentally, it’s been tough staying a home. So it’s good to be with your friends, relax, and play lacrosse.”
Muller entered what was supposed to be his final season as one of the state’s top two-way midfielders. He was one of 15 seniors on the roster, and about a dozen have played together each season since age six, starting with the Wildcats.
“We’ve been on the same teams year after year, so we are used to playing together and are really good friends,” Muller said.
“We would have had a very good shot to make this season special. Fifteen seniors is a lot. And I don’t think I’ve ever been on a team that was closer. The camaraderie and connection we have is really something.”
As a freshman, Muller scored seven goals, added six assists, and helped the Devils capture the 2017 state 3A championship. That squad had about a dozen standouts that would go on to play at the NCAA Division I level. It was also the only high school season he was able to play with his older brother, Alex, who was a senior.
“My role was as a transition midfielder,” he said. “That was where I fit in, so I tried to contribute the best I could.”
He added 12 goals and five assists the following season, and accepted then head coach Eric Jackson’s challenge of emerging as a more rounded player.
Muller’s junior season in 2019 was off the charts. He scored 36 times, dished out 20 assists and was eventually named all-league, all-area and an EPSLA All-Stater.
“He was asked to do a lot for us and he did it all very well: offense, defense, transition, wings. He was a true two-way midfielder,” Jackson said.
“After graduating 25 guys in my underclassman years, I knew that I was going to have to take a more prominent role,” Muller added. “I was cautiously optimistic and was proud that we qualified for states. I stepped up, but so did everyone else, including some kids, who I wasn’t sure about, but they filled their roles and shined.”
In three seasons, Muller had developed into duel threat. He was a key figure in initiating transition on offense, and stopping transition at the other end.
“Jackson was a presence on the field playing defense against some of the state’s best midfielders then going against some of the state’s best long poles on the offensive end,” said current Avon Grove head coach Brian Wallace. “Jackson’s versatility and commitment to his team is bar none.”
In the classroom, Muller ranked third in his class, was a senior class officer and a National Honor Society member. He will attend Michigan in the fall and will pursue a degree in electrical engineering.
Muller had numerous Division I college offers, and others like Notre Dame and Drexel showed interest, but he plans to try to walk on with the Wolverines.
“They have one of the top engineering programs and graduate program,” he said. “My brother goes to Penn State for engineering, and I kind of like the big-school feel.
“I wanted to study engineering and you couldn’t do engineering and lacrosse at those other colleges. And since there is not really a lucrative professional lacrosse league, it really didn’t make sense to focus solely on lacrosse.”