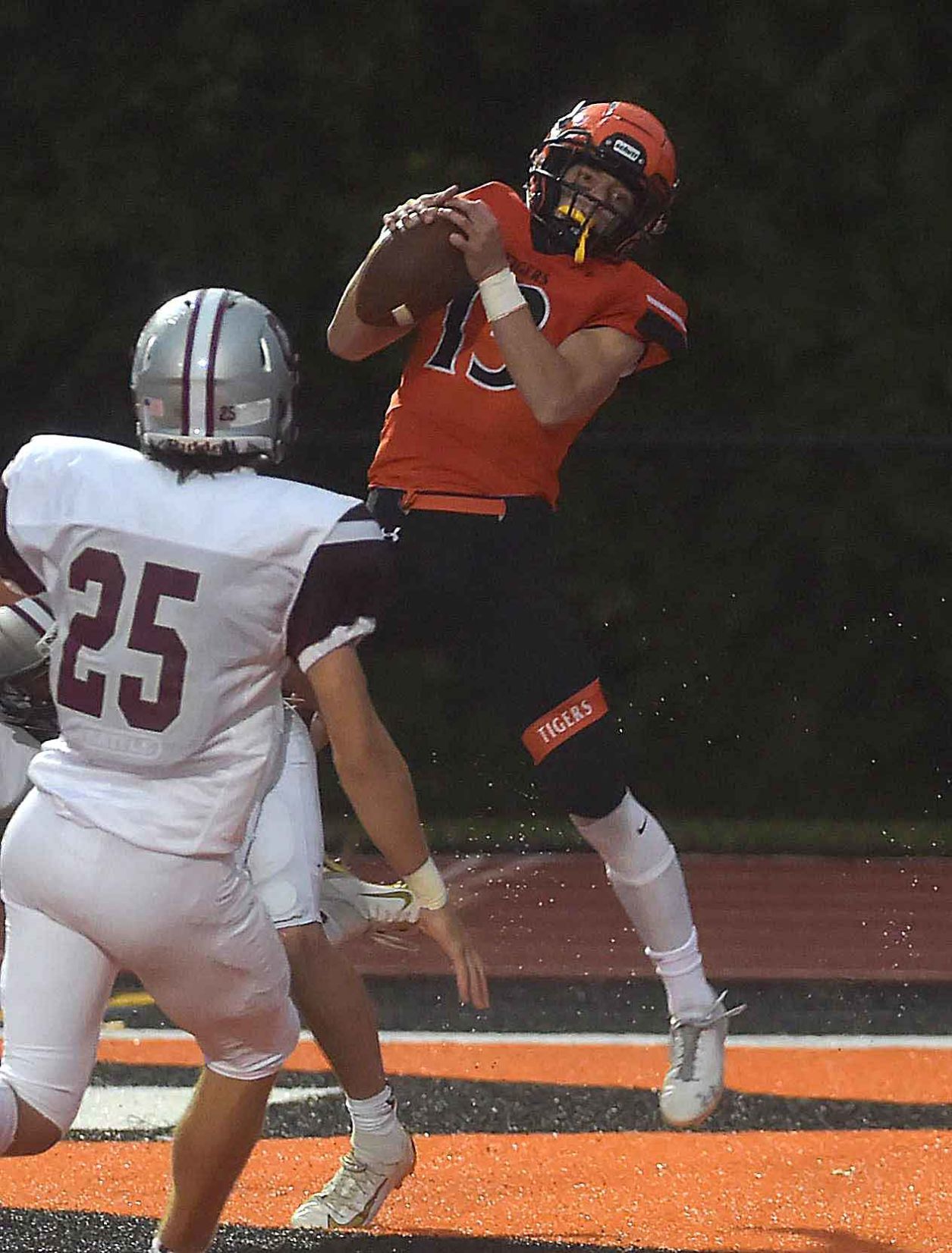 Marple Newtown's Tyler Lynch, catching a touchdown in a football game against Conestoga last fall, would've likely missed the spring lacrosse season due to a knee injury suffered on the gridiron. But he still missed being with his teammates on the sidelines this spring, a would-be consolation prize that was wiped out by COVID-19. (Pete Bannan/MediaNews Group)

As his knee swelled and the pain throbbed, the terrible thought coursed through Tyler Lynch’s mind: Not again.

The Marple Newtown senior had just injured his knee in a football game against Ridley. He didn’t know how bad exactly, but he did the math, counting forward from the cold turf in October to the hope of spring, and the answer wasn’t looking good.

That was before terms like, “coronavirus” and “pandemic” were all over the news. Lynch’s health focus was turned inward on his past. A broken hand in the first game of his junior lacrosse season had brought that campaign to a premature ending. And if the pain in his knee proved to be as serious as he dreaded, then his senior season might be over long before the nets were ever wheeled out of storage.

Marple Newtown’s Tyler Lynch lines up a shot in the 2019 season-opener against Pottsgrove. It would prove to be Lynch’s final high school lacrosse game, thanks to a broken hand suffered later that day and the 2020 season being canceled by the coronavirus pandemic. (Submitted Photo)

“Probably less than 10 minutes after I got hurt, when I was sitting on that table, I was just thinking, ‘Oh gosh, this can’t be serious. I can’t miss lacrosse season again,’” Lynch said. “I was devastated to be thinking that maybe I’m going to miss my senior season.”

None of his cohorts would have that senior season, Lynch would come to learn, in the world of COVID-19. But that doesn’t mean that the senior was spared the immense loss that befell his teammates and peers. The knee injury turned out to be as catastrophic as feared: A torn ACL and meniscus, a sprained MCL. Lynch experienced complications after surgery and was non-weight bearing for more than a month. Football season, he knew, ended right then.

But if the Tigers could work their way deep into the lacrosse postseason, and if all went well in rehab sessions, just maybe Lynch would be able to get back on the lacrosse field. And even if he never buckled up a chin strap, he knew he’d be at the field every day alongside his teammates, going through the mental prep and experiencing the camaraderie that would still mark some semblance of lacrosse normalcy.

Those joys at least were spared by the knee injury, only for Lynch to see the global pandemic later strip them away.

“That’s really hard,” Lynch said. “Even if you don’t get to play, it’s fun to be around and to cheer on your teammates. The gameday stuff, nothing beats that, especially under the lights during the spring. You miss that. You miss hanging out with your friends and just having a great time, even if you’re not on the field.”

The injuries determined Lynch’s lacrosse future for him. He’d played regularly as a sophomore for the Tigers. But with no junior or senior season, offers to play in college were understandably non-existent. His hand fracture in 2019 healed enough to allow a summer travel season, which was some consolation. And if he’d had a senior season, who knows what late offers could’ve materialized?

Instead, Lynch is opting for a more academic future. He’s bound for the University of South Carolina, attracted to the large-school feel, where he plans to try out for the club team (many SEC schools field competitive club lacrosse programs).

“I had gotten a decent amount of D-II and D-III interest and hoped that junior year I could’ve showed scouts something and maybe gotten even a low-level D-I offer, something like that,” Lynch said. “But unfortunately, the college coaches want to see you in action, especially junior year. And it just totally killed chances of getting those looks.”

Complicating matters for Lynch and the Tigers was a coaching change. Tommy Hannum returned to Marple Newtown five years ago, rejuvenating a program that has become a regular playoff contender in Class 2A and restarting the pipeline of Marple players to the college ranks. Hannum stepped down after last season, with Kevin Merchant taking over.

Instead of being part of the first class to play under Merchant, the 2020 seniors exist in a liminal space, as his first class but one that never took the field together.

“He did what you would expect a first-year coach would do,” Lynch said. “He reached out constantly to us, gave us opportunities to get better when there was practice, held a bunch of coaches practices. I think at the start it might have been a little different to have a new coach, but we would’ve gotten into the swing of things pretty quick with him.”

Lynch was finally given the all clear in the first week of June. He’s eager to get back on the field in some form, whether in an abridge summer travel season or just with high school teammates shooting on nets. They’ve staked out Penncrest a couple of days this week as a place to shoot on net.

The pandemic in general has been a lesson in resilience, something Lynch has gotten plenty of practice with. But he’s tried to glean positives from it.

“It’s been a little tough,” he said. “My friends and I have talked about working out and getting back to the field once quarantine’s up. It’s kind of been up for a couple of days, but it’s hard to find a spot to practice. … You’ve just got to stay positive and plan ahead to know that everything will be good as long as you keep a plan and get ready for when quarantine is up.”