SENIOR WEEKS: Bianchi had plans to put Rustin baseball back on top 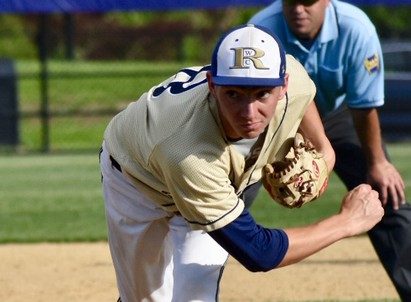 The West Chester Rustin baseball team had eight seniors poised for the 2020 baseball season, and the Golden Knights were going to try to take back the Ches-Mont League American Division title, which they surrendered to Oxford the past two seasons. Prior to 2018, the Golden Knights pretty much ruled the Ches-Mont American and established a winning reputation for the program.

Rustin had reason for optimism going into the 2020 season, as the 2019 Knights — who finished second to Oxford in the Ches-Mont American — caught fire in the district playoffs and qualified for the PIAA Class 5A tournament. But, the 2020 season was not meant to be for those seniors, as on April 9, the PIAA cancelled the spring sports season due to the COVID-19 pandemic.

One of the seniors looking forward to his final season of varsity baseball, and one the Golden Knights were counting on, was infielder Chris Bianchi. Bianchi was staying in shape when the baseball season was in a holding pattern, but the Golden Knights’ senior said he was mentally prepared for the end that would eventually come.

“I was not really that surprised when they officially cancelled the season,” Bianchi said. “As time went by and the days went by, it just seemed like we were not going to play baseball this season. I guess you take things for granted a lot and this just shows that something could be taken from you earlier than you thought.”

Last season the Golden Knights upset defending PIAA Class 5A champion Marple Newtown, before losing to eventual District 1 champion Holy Ghost Prep in the semifinal, and Bianchi felt Rustin was going to use the same formula that it did last year to go a long way in the 2020 season. The Knights sputtered out of the gate in 2019 before getting hot behind a very spirited junior class.

“We started out real slow last year,” Bianchi said. “And then, we got used to playing together and with each other and we really got on a roll. That was probably the way we were going to do it this year but this season really taught me not to take things like playing baseball with your friends for granted, because we ended up not having a season after all. You always look forward to your senior season and you take that you are going to play with your friends and classmates but this year showed me to no take anything for granted.”

Bianchi said he is taking a year off from school and working as a general contractor with his father before going to Williamson College of the Trades in 2021.