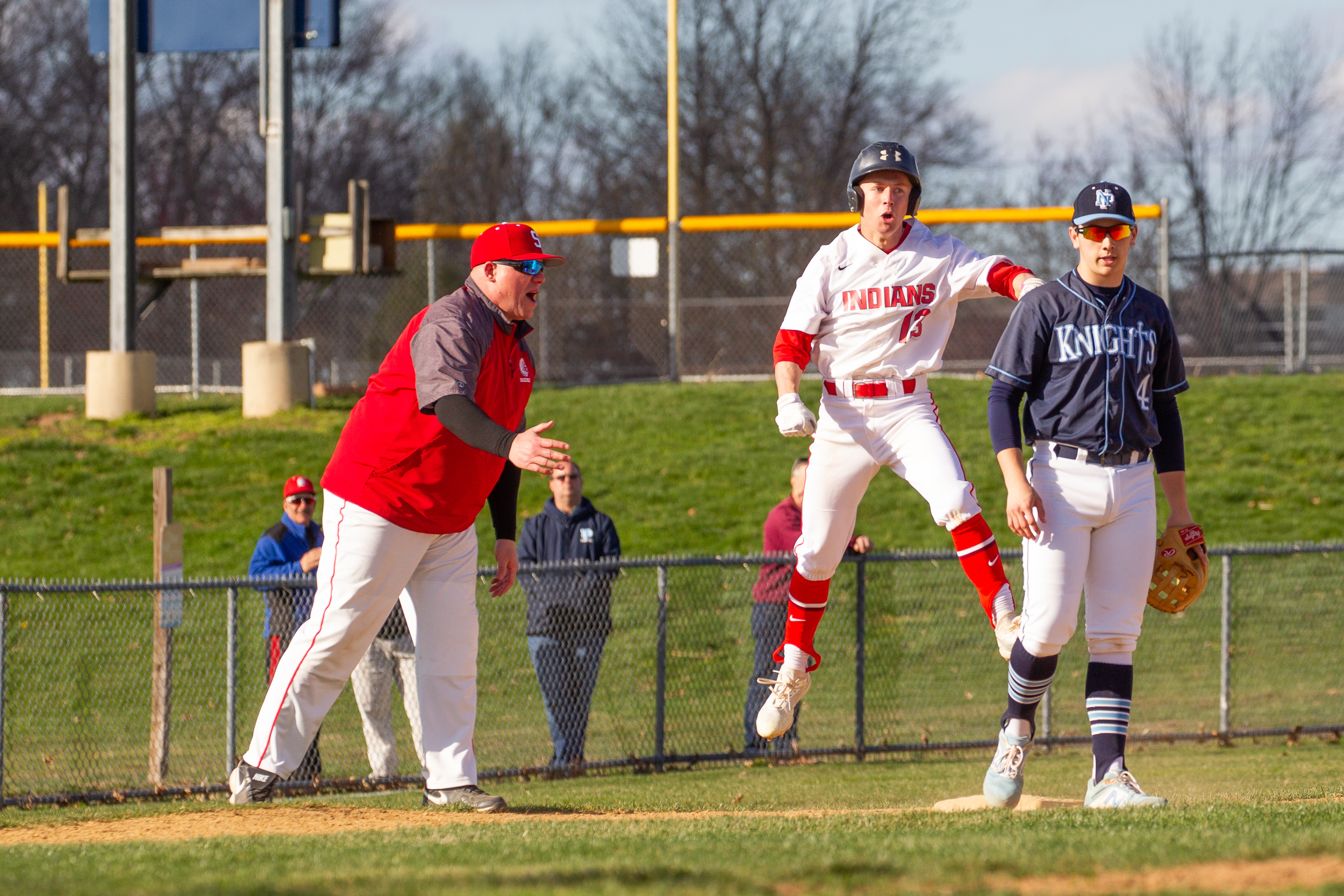 Souderton’s Conlan Wall had accomplished just about everything a high school baseball player could hope to by the end of his junior year. Individually, he earned First Team All-Suburban One League Continental Conference honors and was committed to play college baseball at St. Joseph’s University. For the team, he helped the Indians win the SOL Continental championship and the first PIAA-6A state title in program history.

Despite all that, he still felt he had more to prove before his senior season was cancelled due to the COVID-19 pandemic.

“Our team was amazing that state championship year, obviously,” Wall, who hit .361 as a junior, said. “There are always those doubters. We really wanted to go out and prove them wrong, but unfortunately we didn’t have the opportunity. I wanted to get First Team again just to solidify it.”

Souderton shortstop Conlan Wall goes to put the tag on La Salle’s Andrew Miles on a steal attempt during their PIAA-6A first round game on Monday, June 3, 2019. (Gene Walsh/MediaNews Group)

After a loss to Plymouth Whitemarsh in the District 1-6A quarterfinals, the Indians needed to win a pair of playback games just to qualify for states. In a win-and-advance or lose-and-go-home game against Garnet Valley, Wall tallied three RBIs. He also turned a key double play when Souderton led, 1-0, and GV was threatening in the third inning.

In the state semifinals, against District 1 champion Neshaminy, Wall doubled in the fifth inning to knock the Redskins starter out of the game. He advanced to third and scored on a pair of wild pitches, giving Souderton a 3-0 lead. He anchored the infield in a dominant defensive effort behind the equally dominant Jordan Morales on the mound.

Against Central Bucks South in the state championship, Wall knocked in Souderton’s first run of the game in the fifth inning to cut their deficit to 3-1. Big Red went on to win, 6-3.

“We felt like we were unbeatable going into districts,” Wall, who’s father Ed Wall is the head coach at Upper Dublin, said. “Obviously we were very humbled by the loss to PW, but after the game I remember one of the captains Billy Norbeck said, ‘I don’t know about you guys, but I’m not … losing again.’ From there on out we started counting down the games until the state championship and it eventually got to zero. Our mindset was just don’t back down, don’t lose and never give up.”

Wall played JV as freshman before moving up to varsity as a sophomore. He started as a utility player — playing mainly left field and third base — before stepping into the shortstop role, where he earned Third Team All-SOL Continental honors. He helped the Indians reach the District 1-6A quarterfinals, where they lost to eventual champion Bensalem. He led off the game with a double and scored later in the first inning.

Coming into his senior season, Wall spent most of the winter working on his swing with Pennridge grad Dylan Tice, who’s currently with the New York Mets organization. Despite his .361 average as a junior, he wanted to be better prepared for the Division I pitching he will be facing at the college level.

“I worked on my swing a ton this offseason,” Wall said. “I made a lot of changes. I tried to attack the ball more aggressively, stuff like that. Obviously I work on my swing every year in the offseason, but this year I put even more of an emphasis on it. I was feeling the best I have about my swing ever and I didn’t get the opportunity to see how it went.”

“I went to a lot of schools just with my family,” Wall said. “I just liked the campus, the education that they provide and what really separated it for me was the coaches. I loved the coaches — they’re awesome. They’re super supportive, but can also get you to work hard at the same time. I respect them a great deal. That’s what really drove me to go there.”