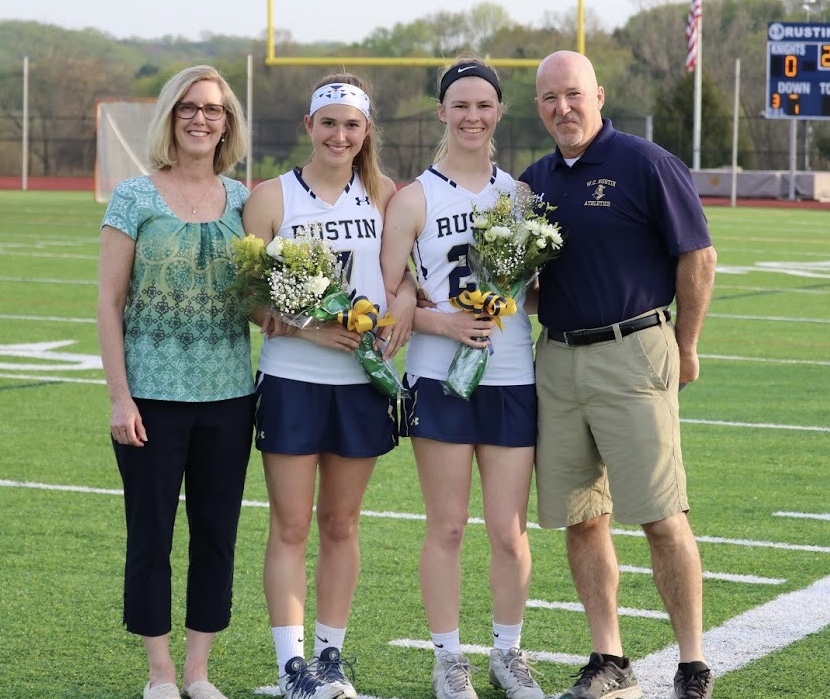 Betsy St. Clair has made the daily commute from West Chester to Philadelphia, and back, for more than three decades. But amidst a sea of forgettable drudgery, she will always remember one trip in particular.

A staff nurse at Thomas Jefferson University Hospital, St. Clair returned home on the evening of April 19th to find the entire neighborhood lit up. Family, friends and neighbors had organized a welcome home celebration just for her.

“I was completely caught off-guard,” she said. “They had the road lit up with luminaries, they had a big-screen with video with messages from my family.”

Betsy — who is the wife of West Chester Rustin teacher and head football coach Mike St. Clair — has been on the frontlines in the battle with COVID-19 since the deadly virus first started spreading like wildfire back in mid-March. The neighborhood festivities — complete with masks and strict social distancing — was an effort to honor and thank one of the many essential healthcare workers who put their lives on the line every day in the service of others.

“I’ve never been through anything close to what Betsy’s been through,” Mike said. “She is a lot stronger than I am. She is certainly the rock of our family.

“Healthcare workers are a backbone that is getting us through this.”

In all, Betsy’s been at Jefferson for 33 years, with the last quarter century in a 19-bed step down telemetry unit. In mid-March, when the coronavirus pandemic hit, several other units at Jefferson began to transition.

“They were trying to keep beds available for the influx of what they were anticipating because of what was happening in New York,” Betsy recalled.

Five Center was operating normally until March 23rd, when the group was called into a break room at 11:30 in the morning.

“We did not anticipate being strictly a COVID-19 unit, but they told us we were going to be next,” she said. “We needed to move all of our patients out and prepare.

“By the time I left at 7 that evening, we had six patients already.”

Working a 12-hour shift with an average of two to three patients to look after, Betsy’s been specifically treating either COVID-19 positive, or presumptive positive, patients ever since.

Those first few weeks, in late March and into April, were the toughest according to Betsy. Early in the pandemic, patients were arriving gravely ill and very few were showing enough improvement in order to be discharged.

“It was horrible,” she said. “I cried every night I left.

“I’ve been a nurse for a long time and I’ve never seen anything like this before. I never thought this would get to the point that it got.

“And it is not all respiratory, it’s a multi-system virus that effects everybody differently. It’s very scary.”

‘WE MADE THE MOVE SO WE WOULD STAY SAFE’

In the midst of the biggest public health crisis of her nursing career, Betsy had other pressing personal matters. Potentially putting herself into harm’s way on a daily basis was now a given, but what about the rest of the family?

And to complicate matters, Mike’s father, Bob, just happened to be visiting at the time in order to see his granddaughter, Tina, play a college lacrosse match for Duquesne at the University of Delaware. Not long after the game, the 97-year-old was experiencing some heart issues and ended up at Chester County Hospital to have a pacemaker implanted.

“Due to all that was going on, it wound up changing our home situation a bit,” Betsy chuckled.

On March 24th, it was decided that Mike, Bob, Tina and Michaela would be moving temporarily to Bethany Beach in Delaware, to stay with Betsy’s mom, Anna Mae Buhl. Betsy would stay in their West Chester home.

“My father had just had a pacemaker put in, and he couldn’t go back home to Wildwood,” Mike pointed out. “We made the move so we would stay safe. We just couldn’t risk living together at that time.”

Now, 73 days later, nothing has changed with the altered living situation. Mike jokingly called his father and mother-in-law ‘the odd couple,’ and did say that it was a bit stressful driving around a vehicle in Delaware in the early days with a Pennsylvania license plate.

“It’s been tough,” he acknowledged. “We’ve had a lot of FaceTime dinners and goodnights. But we were lucky enough that we had some place to go. For those who don’t have that luxury, I don’t know how they are handling a similar situation.”

By essentially quarantining herself, Betsy is doing what a lot of healthcare workers have done. But the resulting isolation and the absence of consistent, in-person family support is difficult. The good news was that Jefferson Hospital didn’t seem to have the desperate shortages of personal protective equipment (PPE) that others across the country experienced.

“I feel horrible for places that didn’t have the PPE we had,” she said. “We used to wear an N-95 mask once and dispose. Now we wear it for five days.

“It gets hot in a mask and a face shield, and after a couple days you are definitely ready for a day off just to be mask-free. But it’s the patients who are struggling much more than any of us.”

PHOTO PROVIDED Betsy St. Clair’s “Five Center” unit at Thomas Jefferson University Hospital models the special t-shirts made by Betsy’s daughters Michaela and Tina. They were manufactured by Westtown’s Ray Liberatore, donated by West Chester-based charity Heartworks, and distributed from Chester County all the way to Betsy’s unit — Five Center — at Jefferson. The front said: ‘Five Center Strong.’ The back: “Together we will make this work against COVID.”

Over the past two and a half months, Betsy’s seen a lot of agony. There have been countless patients on ventilators. She also mentioned patients who don’t eat due to the loss of taste and/or smell. So in addition to being severely fatigued, they struggle to summon up the energy to move.

“It is so debilitating,” she said.

And to add heartbreak to an already heartbreaking situation, her patients are isolated in Five Center, unable to see anybody outside of a limited number of hospital workers.

“It’s been extremely difficult for the patients, especially since their families can’t be with them,” she said.

All of her patients are ultra-important to Betsy, of course, but she often thinks back to her first. His name was Jerry. He walked into Five Center as a presumptive case and never left.

“You could tell he was a gem,” Betsy said. “He had been in another room for a few days with an incidental reason and was hoping to go home that day. His oxygen level had dropped a bit, for no apparent reason, prior to the discharge, so he was transferred to us.”

Over the next three days, Jerry’s oxygen requirements quickly deteriorated. Numerous respiratory therapists were called in and by day four he was given an option: go on a respirator, where the survival chances were not in his favor; or proceed to comfort care.

“Although having breathing difficulties, he was still able to talk,” Betsy recalled. “I was with him as he anguished to make the ultimate decision.

“During that time we set up FaceTime with his wife, his children, a few close friends, his employer and even his insurance company. It was so incredibly sad to be a witness to something so devastating.

“Strangely enough, he coughed a small amount in between tears – both his and mine.”

The patient ultimately decided to go on a respirator, but succumbed not long thereafter.

“His will to fight never left, but COVID took the best of him,” Betsy said. “He will always have a special place in my heart. He was my hero.”

‘THE VIRUS IS STILL OUT THERE AND VERY ACTIVE’

Numerous healthcare workers from other units have tested positive for the virus, but miraculously, nobody from Five Center has been afflicted. As the number of patients has been steadily dropping recently, Jefferson announced last week that Five Center will begin transitioning away from a COVID-only unit.

“We still have patients who are still very sick, but the numbers are decreasing,” Betsy confirmed.

“I have to give Jefferson credit. They did a great job orchestrating everything and preparing. We never got to the catastrophic level – thank God.”

There is always, of course, the threat of a second wave. Betsy worries when she sees reports of pocket resistance around the country to following CDC guidelines moving forward.

“I wish we could enforce making sure everyone is protected when they are out in public. I’m not sure I understand why we don’t,” she said.

“Other than the numbers decreasing (in Pennsylvania), the virus is still out there and very active. Social distancing and masks have helped. It’s scary to go through, and we can do this, but we have to practice safe behavior. I know a lot of people don’t believe it because they’ve been blessed that it hasn’t yet affected them or their family.”

Betsy reports that her youngest coronavirus patient so far was just 25 years old — not much older than her daughters. Michaela is a sophomore and plays club lacrosse at the University of Pittsburgh.

“We can do things safely and smartly,” Betsy said. “The public has done a great job in general, and I know everybody is anxious to get back to the lifestyle that we had. I think that we can, but I think there are going to have to be some adjustments.”

But overall, she is cautiously optimistic.

“We’ve gone through similar things before,” she added. “You don’t even think about wearing seatbelts in cars anymore, but you do it for protection. Is it that hard to wear a mask?

“I know a lot of people are against that, but I feel that wearing a mask and washing your hands – things that the majority of people have already started to do – will enable us to move forward.”

Officially, the death toll nationwide recently surpassed the grim six-digit milestone, and Betsy has doubts about the accuracy of those numbers.

“I think they may be higher because I am taking care of several patients who tested negative but we know that they are positive,” she said.

Throughout the entire ongoing ordeal of squaring off against a deadly pandemic while being separated from her family, Betsy St. Clair is reluctant to be singled out for her contributions. Yes, she is a dedicated advocate for her patients and a fierce defender against COVID-19, but she steers well clear of the ‘H’ word.

“I don’t feel I’m a hero in this,” she insisted. “The patients and the families really affected are the heroes. It’s a blessing that everybody has really pulled together to work toward getting our numbers down.

“There are so many people who have come together and I don’t feel comfortable being singled out.”

SENIOR WEEKS: Whippets’ Small won’t get chance to put Downingtown West back on top of Ches-Mont
SENIOR WEEKS: Henderson’s Hicks hoped for big season on the mound, but now focuses on future