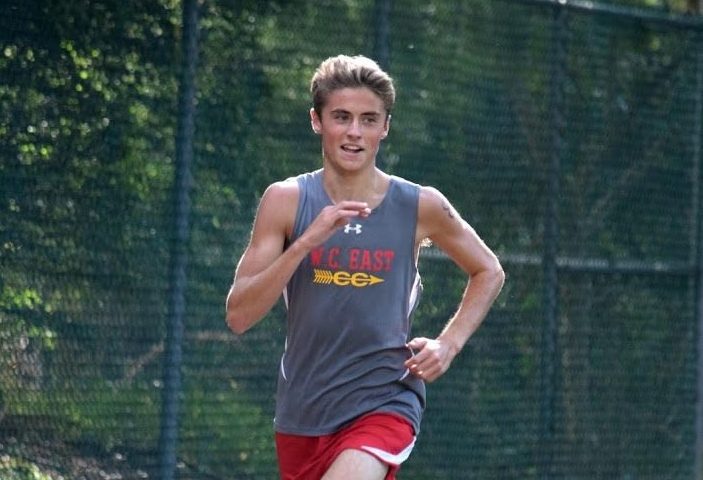 West Chester East senior runner Josh Lewin has been on a record-setting pace for the Vikings during the past couple of years.

Last spring as a junior, he finished third at Districts in the 1600 meter run, then placed 11th in the event at the PIAA track & field state championships. He also helped the 4×400 meter relay team break its own school record at the Penn Relays.

As a senior cross country runner last fall, he finished third at the Foundation Invitational in Hershey, on the same challenging, hilly course that the PIAA cross country championships are held.

This past winter, he finished sixth in the 800 meter run at the Pennsylvania Track & Field Coaches Association indoor state championship. In his junior year, he was part of the Vikings’ distance medley relay team which placed first at the Yale Invitational and was ranked No. 1 in Pennsylvania for a few weeks.

“I was hoping to make it back to outdoor states this spring, where I would attempt to place in the top five in either the 800 or 1600 meter run,” said Lewin. “I was hoping to break the 800 meter and 400 meter [school] records as well this spring. I’ve had injury-plagued cross country and winter track seasons this year, so I was really looking forward to giving it my all in the spring.

“I am very disappointed that my final track season ended the way that it did; however, I understand that safety is a priority and that there was no possible way we could continue competing.”

West Chester East track and cross country coach Kareem Lanier, who has coached the Vikings since 2006, said, “Josh is on the top five track and field athletes in our school’s history. Mentally, when Josh is focused he can break any record and run fast times. He feels as though he can compete at any event and compete at a high level.”

Lanier compared Lewin to former Viking Andrew Lobb, who won the 800 meter run at the PIAA state championships in 2005, and Eric Diestlow, who formerly held the West Chester East record in the 1600 meter run.

“Lobb had the speed, Diestlow had the strength, and Lewin has the speed and strength,” said Lanier. “His range is awesome, to be able to compete in the 400 meters up to 3200 meters. In addition, he’s helped the 4×400 and 4×800 relays qualify for Districts.”

“Josh is a team player when it came to dual and championship meets in cross country and track,” said Lanier. “His teammates depend on him because he has proved that he would battle for them in order to do well.”

As a leading senior on the West Chester East track team this spring, Lewin was asked how he viewed his leadership role in the weeks leading up to the PIAA spring sports cancellation April 9.

Lewin responded, “I think my leadership role mainly entailed reassuring younger members of the team that everything would turn out all right, and enjoying every minute I could with my teammates before the season was shut down.”

Lewin credits a number of mentors for his success; including his father “Big Jeff,” Lanier, and the captain of the 2016 West Chester East cross country team, Danny Brennan.

“My dad has always been like a second coach to me, and I wouldn’t be where I am today if it weren’t for his constant support and training tips,” said Lewin. “Likewise, I look up to my coach [Lanier] for many reasons, most notably for his competitive nature and passion for the sport. Lastly, Captain Danny taught me not only what it meant to be a leader, but also that the most important part of running is to have fun with it.”

Lewin has participated in a number of other activities at West Chest East, including ice hockey and writing for the school’s literary magazine. In the fall, he will attend The College of William & Mary College, where he will run for the Tribe’s elite cross country program and majoring in marketing.

“Josh has come a long way mentally and physically,” said Lanier. “I am very proud and blessed to have coached him. He will do well at the collegiate level.”

SENIOR WEEKS: Malvern Prep’s Wade was prepared to lead what may have been the best team in Pennsylvania
SENIOR WEEKS: Whippets’ Small won’t get chance to put Downingtown West back on top of Ches-Mont