SENIOR WEEKS: Ethan Bradley was counting on one year as Unionville’s leader, on and off the court 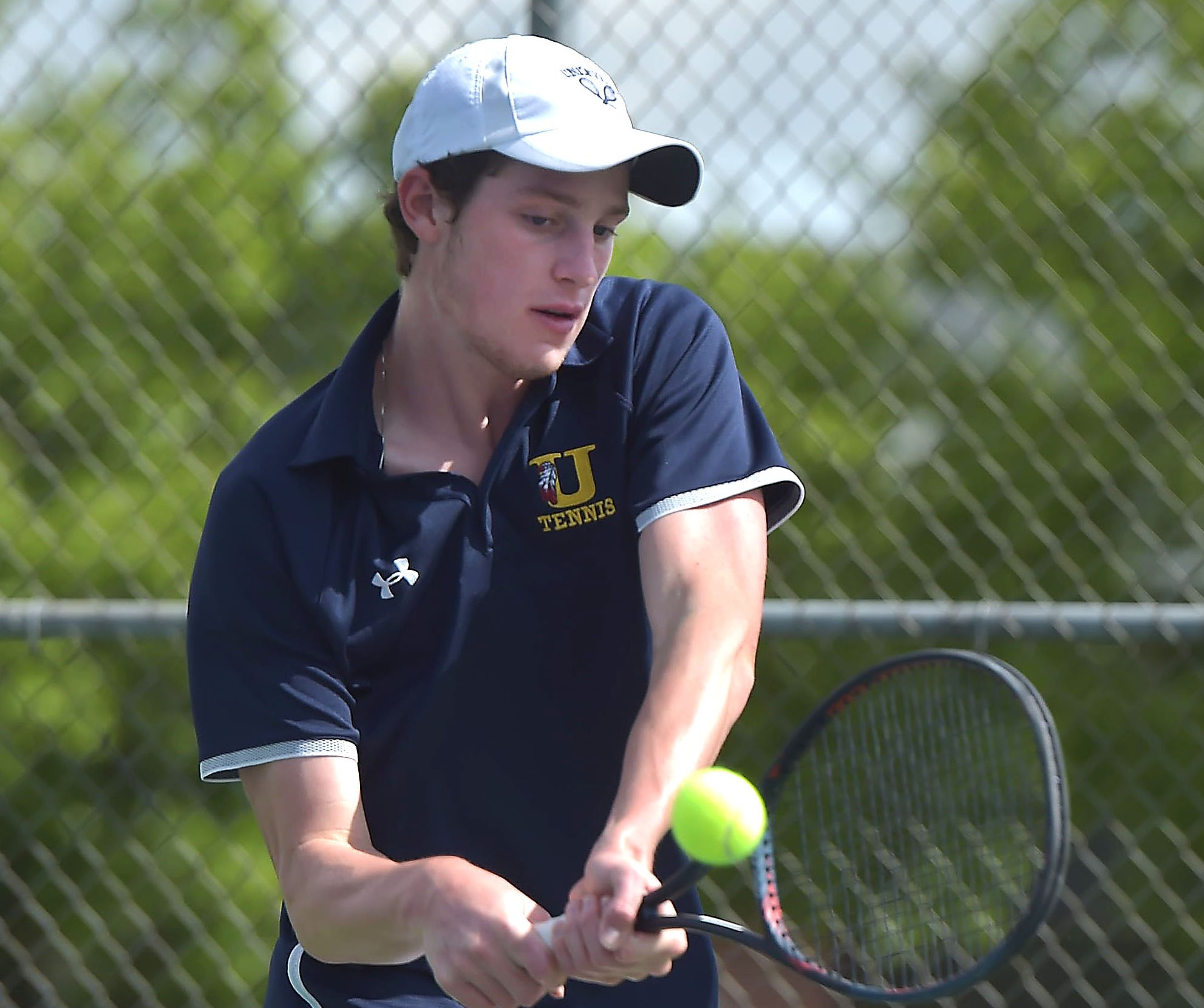 After playing in the shadow of his older brother Tristan for three years, Unionville High School senior captain Ethan Bradley was looking forward to this spring boys tennis season.

“Playing three years behind my brother at No. 2, I felt it was time to come out of his shadow and lead my team,” said Ethan.

While Tristan enjoyed a stellar career at Unionville — finishing fourth at the PIAA Class 3A singles championship last spring, and second at the District 1 3A singles tourney — the 6-foot-6 Ethan casts a pretty big presence on the court himself.

Last spring, Ethan rolled into the District 1 3A singles championship semifinals (where he lost to Tristan), then won his first round state opener in straight sets before losing to eventual state champ Robby Shymanski, a senior at Fox Chapel High School.

“Ethan’s dominant physical skills speak for themselves,” said Unionville boys’ tennis head coach Jimmy O’Rourke. “His mental prowess on the court can be overwhelming to opponents, and he works tirelessly in improving all areas of his game. His leadership skills, in making his teammates the best they can be, are phenomenal.”

Ethan said, “This spring, I believe that I led the team well up until the season’s the cancellation [April 9] with our numerous winter sessions and discussions that were essential to potentially leading our team to a state title. I always felt I was a co-leader with Tristan throughout my first three years so it was definitely a challenge to be the sole person that everyone on my team looked up to.”

This spring, Ethan’s goals were two-fold: winning the PIAA state tournament in singles, and capturing the state team title. Tristan was no longer with the Indians, having graduated last spring and currently playing tennis for Bowdoin College.

“With the individual state tournament, I felt that I had expanded my game over the offseason and I was primed to be a top four seed,” said Ethan. “I worked very hard on my ‘serve and next ball’ game, which for a big man is important because it shortens the point and you are able to be more dominant while conserving a lot of your energy.

“With the team tournament, losing Tristan [to graduation] was a critical loss for our team; however, I still felt that with me and Victor [Li], we were equipped to make a solid state run.”

Two years ago, Ethan played a key role in Unionville winning the PIAA 3A boys’ tennis state team championship. But his favorite memory of that season was not on the court.

“I could give you the exact score of every match I played in leading up to our state title, but my favorite part was the camaraderie of the team and the memories I shared with them on the journey,” said Ethan. “Through the countless dinners, offseason practices, and more, I felt the tightest bond with that team than in any of my years. If I were to pick a specific memory, it would probably be our routinely team dinners at PJ’s. When you feel as connected to a group of people as I did, you feel like you can overcome any obstacle.”

Ethan’s original interest in tennis as a youth came on the grounds of the Wilmington Country Club, where he learned to swim, play golf and play tennis.

“After suffering the 7 a.m. ice-cold swim practices and hooking and slicing countless drives, I picked up the only sport that I was able to succeed in,” said Ethan. “I picked up the sport pretty easily and soon enough I was playing tournaments.”

Ethan said his most important tennis mentor is Jeff Wiedemann, who has been his coach since he was 11 years old.

“It’s hard to coach a stubborn boy, who was way taller than everyone, and refused to move his feet,” said Ethan. “However, he prevailed and ever since we have formed an off-the-court relationship that I truly treasure.”

Ethan also counts his brother Tristan as an important influence.

“I’ve only ever beaten Tristan once in a match and it was so long ago I can’t even remember the score,” said Ethan. “It’s probably my biggest mental block but I’ve soon realized there’s no point in getting angry when I could really be learning from his game. The most important thing I’ve learned from Tristan is showing respect for your opponents and willing yourself to fight back in a match that seems lost.”

Ethan will be joining Tristan in the fall at Bowdoin College to play Division 3 tennis. He is thinking of majoring in political science or government.

O’Rourke said, “With Ethan, Unionville has had a top player and pretty much another coach by our side, helping to bring out the best in all players and while promoting our school’s values in team sports.”

SENIOR WEEKS: Unionville’s Keenan puts baseball career in his past, looks ahead to well-traveled future after
SENIOR WEEKS: West Chester East pitcher Basarab has high hopes for his future at St. Joseph’s