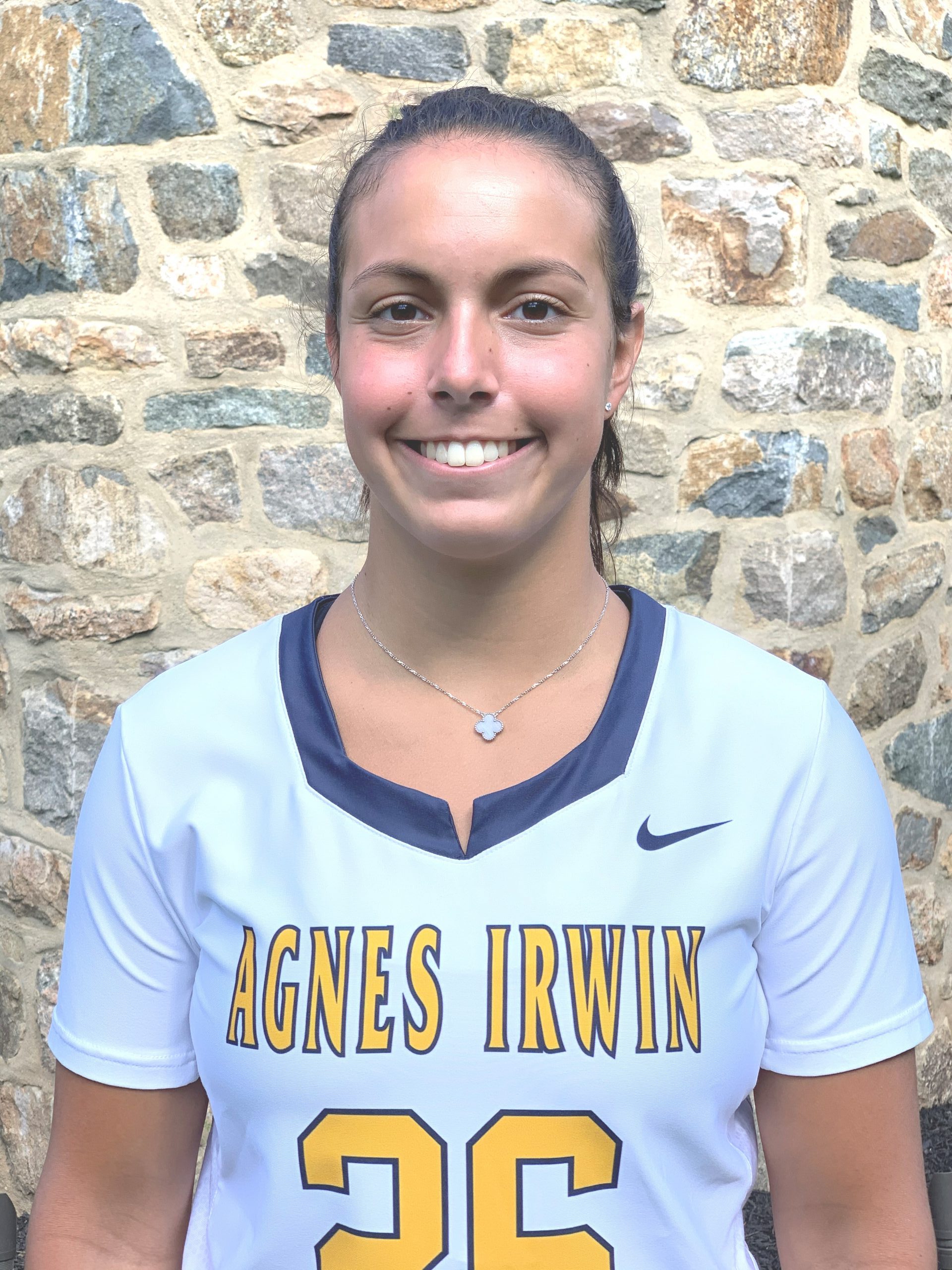 The senior midfielder was a US Lacrosse All-American spring, scoring 83 goals, dishing out 40 assists, collecting 69 ground balls, winning 157 draw controls and causing 31 turnovers as the Owls reached the PAISAA championship final. She was a first team All-Inter-Ac and All-Main Line girls’ lacrosse selection. She also is a soccer standout at Agnes Irwin, receiving first team All-Inter-Ac, All-Main Line and All-Delco honors last fall. Last summer, she was a member of the Puerto Rican national team at the Under-19 World Lacrosse Championships in Canada, and recently received the Inter-Ac Athletic Director Award, a distinction presented to multi-sport varsity senior athletes who exemplify dedication to their team and school.  She is headed to Princeton University in the fall, where she will play lacrosse.

Q: What were your goals for this spring lacrosse season? What aspects of your lacrosse game did you work on most during the off-season?

A: My team goals as a captain were to help my team win another Inter-Ac championship, another PAISAA championship, and to be nationally ranked. As to my individual goals, I hoped to have reached the 250 career goal mark and break my personal record for draw controls in a single season. Additionally I hoped to repeat as a US Lacrosse All-American and to be named to the Under Armour All-American Senior team as my sister Maria was. In the off-season, I worked a lot on my shot location and footwork for offense and defense. I also focused on continuing to work on my draw control skills.

Q: What was your favorite memory of your Agnes Irwin lacrosse career?

A: My favorite memory was winning the 2018 PAISAA championship against Episcopal Academy with my sister Maria and my teammates. It was also memorable because it was Coach [Lauren] Wray’s first season and we really wanted to win the championship for her. Agnes Irwin and EA have such a storied rivalry so it made the victory that much more unforgettable.

Q: What are your thoughts about the cancellation of the spring lacrosse season because of the COVID-19 pandemic?

A: Although I understand that cancellation of the lacrosse season was done for safety, I was heartbroken to have not been able to play my senior year as a captain for Coach Wray with my fellow Agnes Irwin teammates. It was especially disappointing given the enormous potential of our team for this season. That being said, it has made me that much more excited to play lacrosse at Princeton next year.

Q: What was your most memorable experience as a member of the Puerto Rican national team at the Under-19 World Lacrosse Championships in Canada last summer?

A: The entire experience of representing my mother’s family’s country with my sister Maria was one of the most memorable experiences of my life. From a competitive perspective, the most memorable experience was being undefeated, having won eight games in eight straight days. The biggest win was the final game against a very powerful Haudenosaunee team, where I was lucky enough to be named player of the match. My greatest memory from a sportsmanship point of view was the relationship that our team developed with the Kenyan team. It was beautiful to see how people from two very different cultures became such fast friends.

Q: What did it mean to you to receive the Inter-Ac Athletic Director Award?

A: It was an honor to be recognized amongst the great other recipients for the hard work I put in over several years having played multiple varsity sports. It was also an honor to be acknowledged by the Inter-Ac for sportsmanship and leadership and for my dedication to my teams and to Agnes Irwin.

Q: You will be joining your older sister Maria at Princeton. What have been the most valuable things you have learned from her?

A: I always looked up to Maria when I was younger. She has been a role model due to her incredible determination and also how she always put the team first. I so loved playing with her at Agnes Irwin and I can’t wait to play with her at Princeton next year!

Q: What do you think you might want to major in at Princeton? Is there a career field that particularly interests you at the present time?

A: I honestly don’t know exactly what I would like to major in at Princeton, as I feel I have so many things I am interested in. However, the career field that I am particularly interested in at this time is the law.

Q: Did you participate in any other extracurricular activities at Agnes Irwin other than lacrosse and soccer?

A: Other than lacrosse and soccer, I played on the varsity squash team for two years. I also was a member of the staff of The Lamp, our yearbook at Agnes Irwin, and a tour guide for the school. I have also been a regular volunteer for the Speak Up organization.

Favorite pre-game pump-up song: Do I Wanna Know? by The Arctic Monkeys.

Person I most admire, and why: “I greatly admire my grandparents who are Italian immigrants. They created an amazing legacy despite the many hardships that they had to endure.”

Shipley’s Luke Grayum is Main Line Boys Athlete of the Week
Senior Spotlight: Walker shaped by experiences on and off fields at Pottsgrove