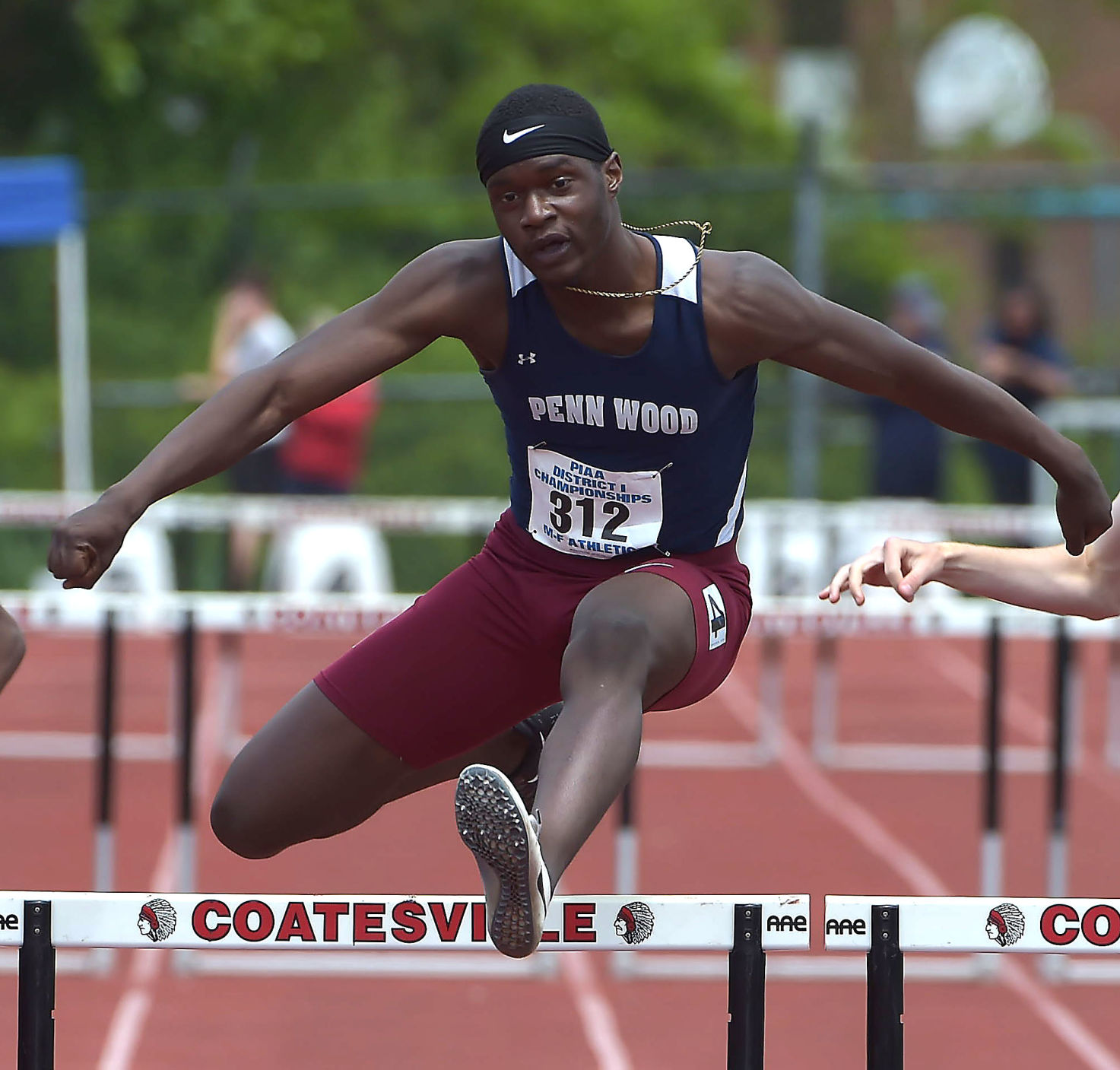 Running track is just one of the many interests of Penn Wood's Timi Odunjo, the 2019 Daily Times Boys Track & Field Athlete of the Year. (Pete Bannan/MediaNews Group)

One day, Timileyin Odunjo plans to write a book or make a documentary about his life. He even has a title picked out.

“I like ‘Renaissance Man,’” the Penn Wood senior said this week.

It’s an appropriate heading. Most people know Odunjo as the top returning intermediate hurdler in the state, a runner-up in the 300 hurdles at the PIAA Class 3A championships as a junior and the 2019 Daily Times Boys Track and Field Athlete of the Year.

But Odunjo’s accomplishments and interests go far beyond the track. The native of Nigeria is a young man of many talents and a true American success story.

He is Penn Wood’s senior class president, was involved in the Science Olympiad, math honor society, stage crew, acted in the school play, played trumpet in band as a freshman and has since taken up the piano. Odunjo participated in the school’s fashion show, was a member of a club called WOKE (Working on Keys of Evolution) and the Christian club. Odunjo also was a financial literacy advisor at Penn Wood for a program sponsored by the Franklin Mint that taught students how to be financially stable once they get out of school.

Those were just his in-school activities Odunjo could remember off the top of his head. In the summer he helps train elementary school kids in track and field and has worked as a chaperone at the New Life Baptist Christian camp.

“There’s a lot to me,” said Odunjo, who moved to the United States with is family shortly before his second birthday. And there’s a more lot to come, once he enrolls in Columbia University in the fall.

His academic interests are just as varied. He likes to write and create stories, so it is no surprise that English is his best subject, but not necessarily his favorite. He also enjoys math and science, anything to do with problem solving. And he does everything with a passion.

But that wasn’t always the case. Overweight and bullied in elementary school, Odunjo turned to athletics to build himself up physically. He wasn’t focused in the classroom, either. His academic focus changed when he found a friend in classmate Jimmy Sek in eighth grade.

“I met him because I did get in trouble in class,” Odunjo said. “I had to relocate my seat because I was being disruptive and that’s when I met him. Ever since then we became close. At the time, when it came to academics, we were opposites. He was really dedicated and I would play around. I had enough intelligence that would get me through it, but I never worked. When I met him I saw how he was driven and I met more people like that and that’s when I started getting better academically.

“He’s valedictorian of our class. I would see his grades compared to my grades and I wondered how he was able to do that. And it was just that he worked hard and studied for it.”

Odunjo followed Sek’s lead, and his grades started to improve, so much so that his grade-point average is ranked 11th out of a Penn Wood graduating class of more than 300.

“I really wanted to be in the top 10 because both of my sisters were in the top 10,” Odunjo said. “But coming from my ninth grade year, being in the 100s, it’s a pretty good accomplishment. I’m fine with that.”

Odunjo’s athletic career followed a similarly gradual rise. It took several years to develop into one of the top hurdlers in the state. His breakthrough came last year when he won every intermediate hurdles race he ran until the state final, when he was edged by Godwin Kabanda of Northeast High by a little more than half a second. Odunjo was hoping to close out his scholastic career with a state title, but those hopes were dashed when the PIAA canceled the spring sports seasons in the wake of the coronavirus pandemic. This weekend would have been the state final.

“It kind of hurt because the states race was the only race that I lost,” Odujo said. “Being a state runner-up is a great accomplishment for not having made states before, but I felt like this year I would have been the state champ, so I have mixed emotions. I still accomplished everything I wanted. I’m going to a great school on a full ride, but I still wanted that state championship.”

Odunjo credits his strong faith for helping him achieve all that he has.

“I told God what I would love him and I just trusted in him, and he did greater than I can imagine,” Odunjo said. “I’m just grateful to him for that.”

Odunjo would like to compete in track sometime this summer, but his main focus is on preparing for graduation and college. He is headed to Columbia to run track and plans to major in economics and possibly minor in one of the arts, such as acting or film. That will come handy if he ever does put his life story down on paper or film.

As for his other long-range plans, Odunjo is leaving his options open.

“I’m all about being successful in whatever I do,” Odunjo said. “My passion is all over the place and when I find something that I’m seriously passionate about, I want to go at it full throttle. I don’t want to limit myself early and then maybe not see what I’m supposed to be passionate about. So I kind of just go with the flow and try to be the best at everything. I keep myself open and whatever God wants me to be, that’s what I’ll be.”