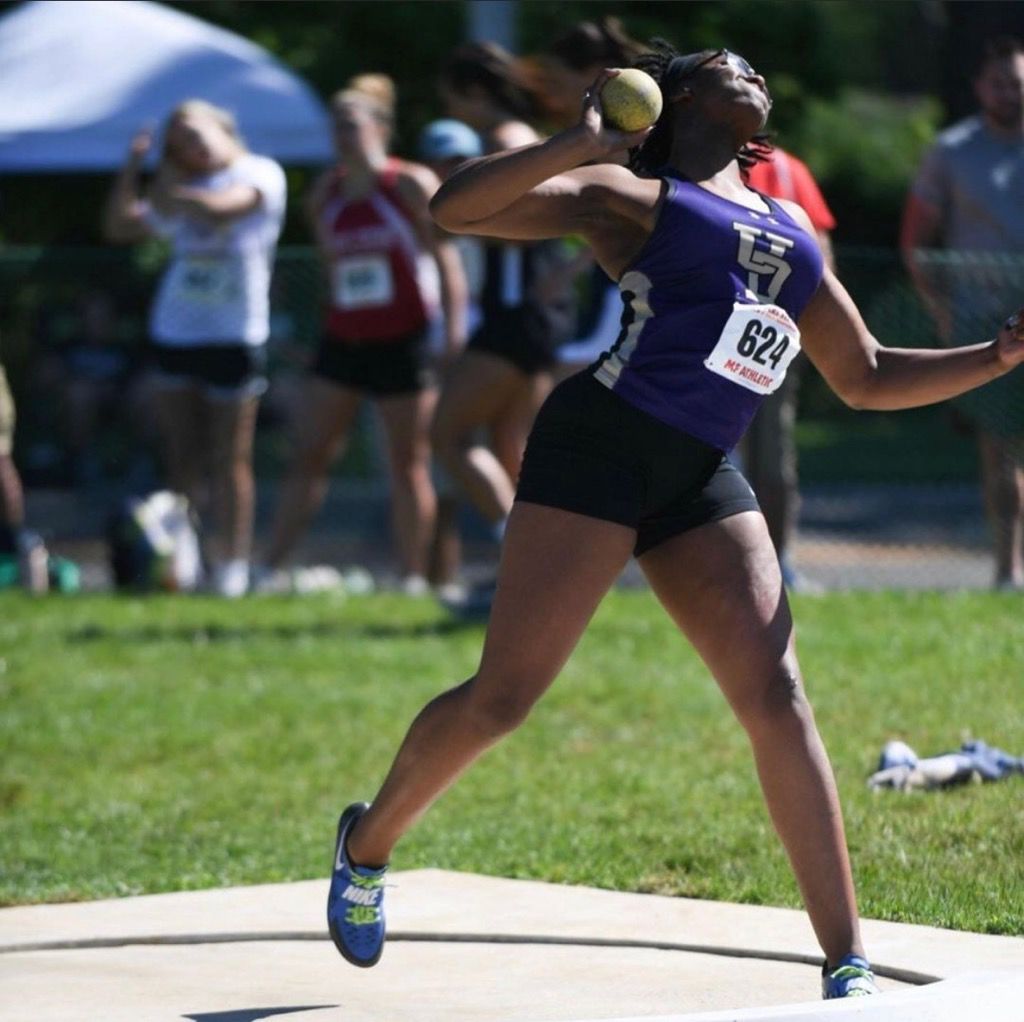 Upper Darby All-Delco track and field thrower Kayla Thorpe competes in the shot put at an outdoors meet last year. Despite not being able to compete outdoors as a senior, she holds the school record for the shot (indoor and outdoor), the discus and javelin. She will attend Towson University in the fall. (Submitted photo)

Arlington Cemetery sits on 130 acres directly across Lansdowne Ave. from Upper Darby High School. At least once a week, Upper Darby girls track coach Brad Gilbert has his runners do a workout around the circumference of the facility.

All track athletes, sprinters, hurdlers, middle and distance runners are required to complete that 2.2-mile circuit. Throwers are exempt.

Senior Kayla Thorpe referred to it as “The Graveyard Run” and that training exercise changed the course of her track and field career when she was a freshman.

“That workout was something I hated,” Thorpe said. “The second time we had to do that I remember thinking to myself that I was ready to try something else. I have asthma, so it’s hard.”

Thorpe said Gilbert told her she could “branch out” if she wanted, and she wanted to do just that.

“I asked (assistant coach Michelle) Ezzie if I could try the throws because I knew I wanted to try it in middle school,” Thorpe said.

Thorpe’s days as a sprinter were over and her career as a thrower was born.

“I don’t know if I would still be running or just focusing on school if I didn’t switch to the throws,” Thorpe said. Upper Darby’s Kayla Thorpe competes in the shot put at the Pennsylvania Track & Field Coaches Association indoor state championships. She was fifth this past winter and seventh as a junior. (Submitted photo)

In time, she developed into one of the most accomplished and versatile throwers in county history, even though Thorpe had her senior year canceled by the coronavirus pandemic. Last year, the Upper Darby junior was the first Delaware County athlete to win a medal in all three throwing disciplines (shot put, discus and javelin) at the District 1 Class 3A championships, and the first to qualify for the PIAA championships in each event since Springfield All-Delco Christine Heffernan in 1999.

Thorpe was second in the shot put and third in both the discus and javelin at the district meet, and fourth in the shot and sixth in the javelin at the state championships, which earned her a spot on the All-Delco team and consideration for female Athlete of the Year honors.

This year, she was a safe bet to medal in all three events in Class 3A at the PIAA championships, which would have been held this weekend in Shippensburg. Among the returnees from last year’s state meet, Thorpe was the only athlete ranked in the top eight in all three events. The top eight finishers earn a medal at the state meet. Thorpe ranked second in the shot, third in the javelin and sixth in the discus, so the cancellation of the outdoor season was a disappointment.

“I’ve been reminiscing about that,” she said. “Snapchat shows you things that happened a year ago and so I saw all the pictures and videos I took from districts and states last year.”

An athlete competing in two of the throwing events, usually the shot and discus, is common. Taking part in all three is rare. Thorpe is the only Delco athlete whose career best in each event ranks in the top 10 in the county since 2000 and she holds the school record in all three events (43-0½ in shot, 125-10 in the discus and 136-5 in the javelin).

“If she trained for it, she could be a heptathlete,” Gilbert said. “She can high jump, long jump ad run. She’s an amazing athlete.”

Thorpe isn’t afraid of hard work. In addition to going to school and competing on the track team, she also works part-time at Moe’s Southwest Grill in Drexel Hill. She has an intense desire to improve as her workout regimen showed. Before school was shut down Thorpe would lift four or five times a week.

When she isn’t working with Charles Sawyer and Jennifer Rogers at Upper Darby, Thorpe trains with former Glen Mills coach Barry Swanson at his Train Hard Win Big facility in Wilmington on Sundays.

“I started going there the summer before my junior year,” Thorpe said. “When I first went there I was throwing 38 (in the shot put) and I jumped to 43 just before my season ended. I started getting serious when I started to place in meets. I realized I was on the right track. The day I broke the indoor record (in the shot put) in my junior year really motivated me. It was 41-something and I didn’t think I would be able to get that. I was 38-ish, but then it took off from there. And when coaches started to reach out to me from colleges I knew it was real.”

If Thorpe had to pick a favorite event she said it would be a tie between the shot put and javelin, but she’s not about to give up the discus once she gets to Towson. She expects to compete in all three events at the collegiate level and possibly add a fourth.

“The coaches at Towson told me that they may have me try the hammer (throw) and see how it goes,” Thorpe said.

No one at Upper Darby will be surprised if she succeeds in that event, too.

“She’s really special,” Ezzie said. “She picked up all the throwing events quickly. I believe we could have put her in a jumping event and she would have picked it up. She’s just very athletic and she loves it and that makes it fun to work with her.”

“She’s just amazing,” Gilbert added. “She’s one of those once in a generation athletes. I’ve never had anything like her. To accomplish what she has accomplished while working 25-30 hours a week and maintaining a solid B (average) shows you her drive and willpower.

“Towson is getting a raw talent.”

‘Renaissance Man’ Timi Odunjo is a star on and off the track
For rehabbing lacrosse players, COVID-19 took away last chance on field