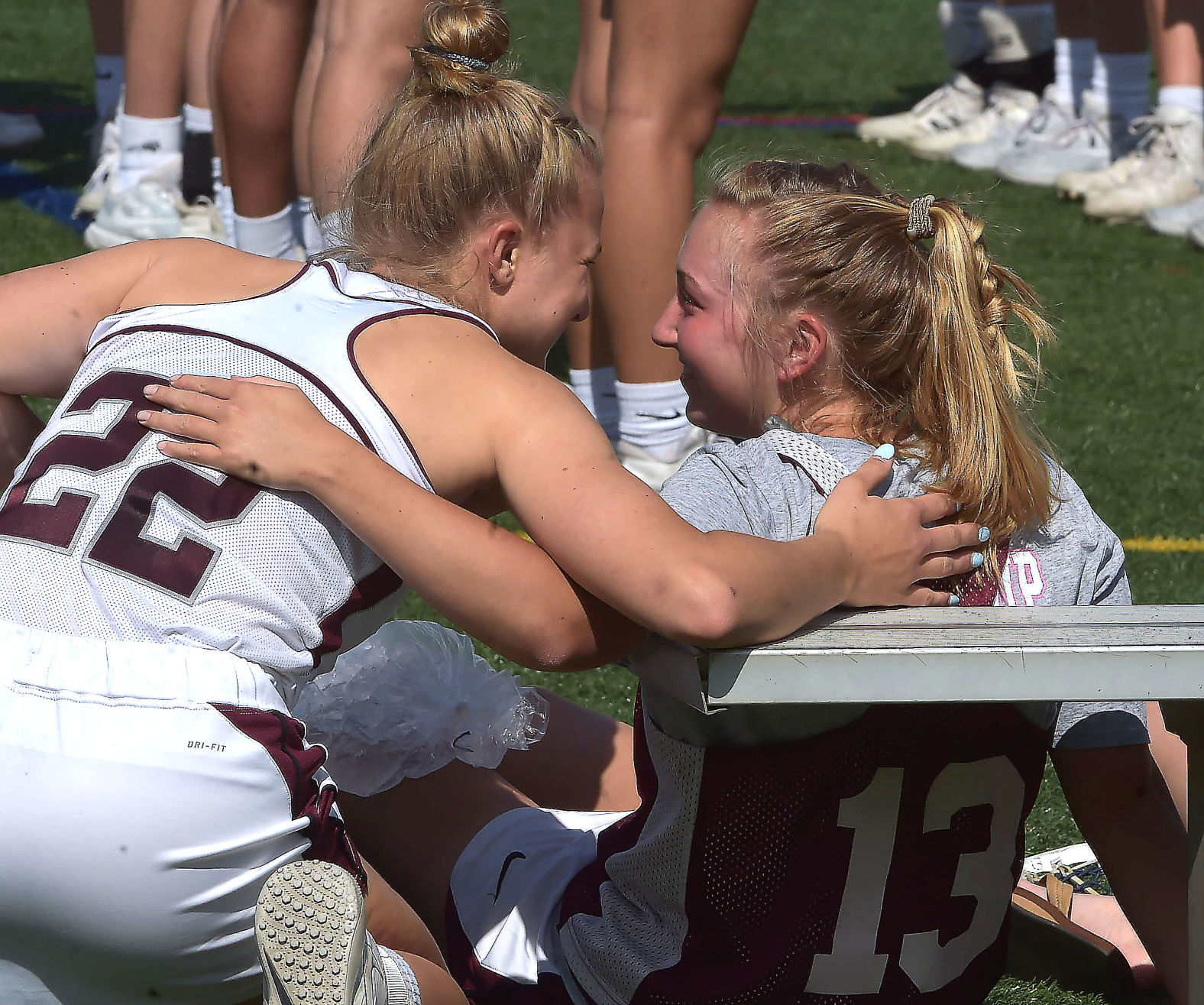 Radnor's Ellie Mueller, left, offers teammate Melissa Massimino encouragement as Massimino looks on in their District 1 Class 3A playoff game last spring. Massimino tore her ACL in warmups before the game, and she hasn't played since thanks to the coronavirus pandemic cancelling the spring season. (Pete Bannan/MediaNews Group)

When Olivia Memeger felt the tug in her quad, she had no idea just how long the wait for lacrosse would be.

It was April 11, 2019. Memeger, a junior attacker on Strath Haven’s lacrosse team, was off to a flying start. In seven-plus games, Memeger had 26 goals and 45 points, the leading offensive catalyst for a squad likely to be squarely in the second tier of the deep Central League. She’d scored twice against Penncrest that afternoon before getting injured, though she pushed through to finish the game.

The diagnosis, which kept her away from the team during a spring break trip, was a quad strain. It would take four to six weeks to heal. If Strath Haven made a deep run into the District 1 playoffs, Memeger could get back on the field.

Instead, a 4-1 start tumbled into just two wins in the last 13 games and a first-round playoff exit. And long before COVID-19 was the ubiquitous and existential threat of today, Memeger figured that she’d have another chance, as a senior, with a clean bill of health.

That’s not the way it turned out for her, or for so many other spring athletes.

Strath Haven’s Olivia Memeger, left, looks for an opening on Penncrest goalie Kaylee Woodhull in a game last April. It proved to be the final game of Memeger’s high school career, thanks to a quad strain suffered in the game and this year’s COVID-19 pandemic. (Pete Bannan/MediaNews Group)

Memeger finds herself in a subset of athletes hit particularly hard by the cancellation of the spring season. All athletes are feeling it, none more so than seniors. But within the upperclassmen are athletes like Memeger, who were denied some or part of their junior season and who looked toward the 2020 campaign as a goal to get back to health, a capstone season that was never to be because of school closures wrought by the global pandemic.

The direness of the situation grows in direct proportion to the length of the rehab. In girls lacrosse, where knee injuries seem all too common, it’s a frequent refrain.

Melissa Massimino was within shouting distance of the end of her junior season when it ended under unusual circumstances. A misstep while warming up for Radnor’s District 1 playoff game with Perkiomen Valley sent Massimino down in a heap. The midfielder/defender watched that game sitting on the ground near the Radnor bench, tears in her eyes, bags of ice on her rapidly swelling knee. Radnor would lose its next game to Conestoga, and though the Raiders got to states via playbacks, they fell in the quarterfinals to Harriton.

But Massimino, who goes by Missy, lost much more to the torn ACL suffered that day. Gone was her senior season on the soccer field. Gone was a basketball season, though she did recover for a Senior Day appearance and a made 3-pointer. Lacrosse was the light at the end of her rehab tunnel.

“I was upset that I was missing my senior season of soccer and basketball as well,” she said. “I was still on the team and that was good, but also rehabbing and going to PT, that was hard, thinking about lacrosse season.”

Agnes Irwin’s Kacy Hogarth could relate. The junior attacker tore her ACL last April 10 against Baldwin, knowing as soon as it happened that she’d be done for a while. The Owls were 10-2 when Hogarth, who had 16 goals and 10 assists, went down. They finished 21-8. Crucially, Hogarth was marooned on the sidelines for the second loss to rival Episcopal Academy and all three setbacks to eventual PAISAA champion Notre Dame.

“I thought our team was headed in the right direction,” Hogarth said. “I thought our offense and defense were really starting to click, and obviously I was so disappointed to not be a part of that because I was so close to seniors like Grace Bartosh and Emily Wills. It was disappointing not to be able to play another game with them. And watching the practices and watching the games after that was really hard, especially the big games against Moorestown and EA. Those games are some of the best games that you can play in because of the adrenaline, and the rivalry makes you love the game even more.”

The injury cost Hogarth her senior field hockey season. But it amped her up for what she hoped would be an Agnes Irwin “revenge tour,” against a deep class of talent in the Inter-Ac and the Owls’ usual national schedule.

The University of Maryland commit had plenty of support in her rehab. She worked with older brother David, a Haverford School grad, when he was on break from William & Mary, where he plays baseball. Former AIS lacrosse coach Jenny Duckenfield was a constant source of comfort, and Hogarth credited classmate and friend Natalie Pansini with motivation at every step.

Agnes Irwin’s Kacy Hogarth tore her ACL during the 2019 girls lacrosse season. Her rehab was geared toward returning for this season, before it was cancelled by the coronavirus pandemic. (Submitted photo)

One connection from further afield came from an Agnes Irwin legend: Hannah Keating, the 2015 Daily Times Girls Lacrosse Player of the Year. Keating tore her ACL in high school and again at Harvard. She was one of the first people Hogarth called to get advice on the process.

Hogarth’s silver lining stems in part from knowing that she’ll have extra time to strengthen her knee, becoming not just healthy enough to play but 100 percent healed. She hopes that’ll forestall future issues. One of the biggest takeaways she got from Keating was to keep plowing forward with rehab exercises even when back running fully and thinking that you don’t need them anymore, since strength-building remains important. With nothing else to do now, Hogarth is taking the message to heart.

“Everyone keeps telling me, this might be a good thing with my knee to rest up a little bit,” she said. “In the back of my head, I keep emphasizing that, hey, this could have helped you prevent another injury and sitting out the first year at Maryland, which would’ve been tougher.”

Massimino’s rehab partner was closer to home: Older sister Nicole, who missed both her freshman and sophomore seasons at Notre Dame due to injury and incurred a succession of knee ailments in high school. Nicole tore her ACL about a month before Melissa, giving the younger sister ready-made benchmarks to chase.

“It was definitely good because she was a month ahead of me, so she was like, ‘I’m doing this and that.’ It would get a little competitive with each other, so it was kind of good,” Missy said. “She was down in D.C. so I wasn’t rehabbing exactly with her, but it was the same stuff and it would be kind of funny to see who was doing what.”

Missy Massimino will continue her career at Georgetown. As a three-sport athlete, she tried to salvage what she could from the other seasons, even if that only meant working the music for hoops practices.

“It was super hard, but I love going to practices, and they’re the best part anyway because (Radnor basketball coach Mark) Jordan is so fun,” Massimino said. “I was doing all the practices, I’d be the DJ and I’d do drills sometime. It was still good though because the atmosphere is so fun even if you’re not playing.”

Memeger was encouraged by Strath Haven’s preseason. She skipped cross country in the fall for the first time in high school, gearing her entire year toward lacrosse, which she’ll play at Lehigh. With a deep class of freshmen, she hoped for a surprising campaign.

“It was pretty much August through March that I was shooting, playing wall ball, working on stick skills and trying to just make the season better, especially after not playing the second half of last year,” she said. “And in preseason, I thought we were playing better than we have in a long time, so it was a hard time hearing that we wouldn’t have a season.”

Each player had to emotionally move on, stowing their hopes for this season and redirecting their energies to the future. With the page turned, the lingering issue is uncertainty of when the next game will be. Wall ball and individual workouts are useful stand-ins, but they hardly replace game action.

“It’s hard mentally to keep bringing that intensity every day in practice,” Memeger said, “because you can’t get on the field with teammates to see if anything you’re doing is helping your play improve because it’s just you on the field.”

All three players, and many in similar places, are trying to manage the moment with an eye toward better times ahead. It’s not what they wanted to do – you’d forgive them for hoping that they’d filled their quota of that mindset last year – but it’s what they’re left to make the best of.

“It’s just hard to stay motivated because you don’t know when you’re going to play your next lacrosse game because it’s all up in the air with this whole thing,” Hogarth said. “Staying motivated is easy, but there is the suspense of, ‘When am I going to play that next game?’ You’re getting in the best shape of your life for your next game. It’s just hard to see the light at the end of the tunnel of this scenario, speaking for every senior, because we don’t know when the next game is going to be for us.”